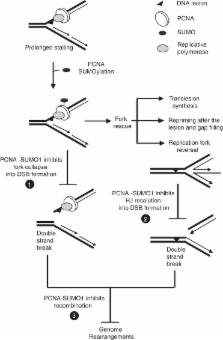 DNA double-strand breaks (DSBs) can be generated not only by reactive agents but also as a result of replication fork collapse at unrepaired DNA lesions. Whereas ubiquitylation of proliferating cell nuclear antigen (PCNA) facilitates damage bypass, modification of yeast PCNA by small ubiquitin-like modifier (SUMO) controls recombination by providing access for the Srs2 helicase to disrupt Rad51 nucleoprotein filaments. However, in human cells, the roles of PCNA SUMOylation have not been explored. Here, we characterize the modification of human PCNA by SUMO in vivo as well as in vitro. We establish that human PCNA can be SUMOylated at multiple sites including its highly conserved K164 residue and that SUMO modification is facilitated by replication factor C (RFC). We also show that expression of SUMOylation site PCNA mutants leads to increased DSB formation in the Rad18 −/− cell line where the effect of Rad18-dependent K164 PCNA ubiquitylation can be ruled out. Moreover, expression of PCNA-SUMO1 fusion prevents DSB formation as well as inhibits recombination if replication stalls at DNA lesions. These findings suggest the importance of SUMO modification of human PCNA in preventing replication fork collapse to DSB and providing genome stability.

A simple technique for quantitation of low levels of DNA damage in individual cells.

Joseph McCoy, Raymond R. Tice, V. Singh … (1988)
Human lymphocytes were either exposed to X-irradiation (25 to 200 rads) or treated with H2O2 (9.1 to 291 microM) at 4 degrees C and the extent of DNA migration was measured using a single-cell microgel electrophoresis technique under alkaline conditions. Both agents induced a significant increase in DNA migration, beginning at the lowest dose evaluated. Migration patterns were relatively homogeneous among cells exposed to X-rays but heterogeneous among cells treated with H2O2. An analysis of repair kinetics following exposure to 200 rads X-rays was conducted with lymphocytes obtained from three individuals. The bulk of the DNA repair occurred within the first 15 min, while all of the repair was essentially complete by 120 min after exposure. However, some cells demonstrated no repair during this incubation period while other cells demonstrated DNA migration patterns indicative of more damage than that induced by the initial irradiation with X-rays. This technique appears to be sensitive and useful for detecting damage and repair in single cells.

RAD6-dependent DNA repair is linked to modification of PCNA by ubiquitin and SUMO.

Carsten Hoege, Boris Pfander, George-Lucian Moldovan … (2002)
The RAD6 pathway is central to post-replicative DNA repair in eukaryotic cells; however, the machinery and its regulation remain poorly understood. Two principal elements of this pathway are the ubiquitin-conjugating enzymes RAD6 and the MMS2-UBC13 heterodimer, which are recruited to chromatin by the RING-finger proteins RAD18 and RAD5, respectively. Here we show that UBC9, a small ubiquitin-related modifier (SUMO)-conjugating enzyme, is also affiliated with this pathway and that proliferating cell nuclear antigen (PCNA) -- a DNA-polymerase sliding clamp involved in DNA synthesis and repair -- is a substrate. PCNA is mono-ubiquitinated through RAD6 and RAD18, modified by lysine-63-linked multi-ubiquitination--which additionally requires MMS2, UBC13 and RAD5--and is conjugated to SUMO by UBC9. All three modifications affect the same lysine residue of PCNA, suggesting that they label PCNA for alternative functions. We demonstrate that these modifications differentially affect resistance to DNA damage, and that damage-induced PCNA ubiquitination is elementary for DNA repair and occurs at the same conserved residue in yeast and humans.

PCNA, the maestro of the replication fork.

George-Lucian Moldovan, Boris Pfander, Stefan Jentsch (2007)
Inheritance requires genome duplication, reproduction of chromatin and its epigenetic information, mechanisms to ensure genome integrity, and faithful transmission of the information to progeny. Proliferating cell nuclear antigen (PCNA)-a cofactor of DNA polymerases that encircles DNA-orchestrates several of these functions by recruiting crucial players to the replication fork. Remarkably, many factors that are involved in replication-linked processes interact with a particular face of PCNA and through the same interaction domain, indicating that these interactions do not occur simultaneously during replication. Switching of PCNA partners may be triggered by affinity-driven competition, phosphorylation, proteolysis, and modification of PCNA by ubiquitin and SUMO.