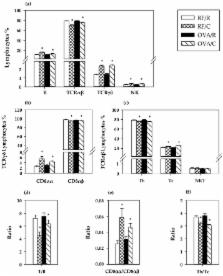 Cocoa powder, a rich source of polyphenols, has shown immunomodulatory properties in both the intestinal and systemic immune compartments of rats. The aim of the current study was to establish the effect of a cocoa diet in a rat oral sensitization model and also to gain insight into the mesenteric lymph nodes (MLN) activities induced by this diet. To achieve this, three-week-old Lewis rats were fed either a standard diet or a diet with 10% cocoa and were orally sensitized with ovalbumin (OVA) and with cholera toxin as a mucosal adjuvant. Specific antibodies were quantified, and lymphocyte composition, gene expression, and cytokine release were established in MLN. The development of anti-OVA antibodies was almost totally prevented in cocoa-fed rats. In addition, this diet increased the proportion of TCRγδ+ and CD103+CD8+ cells and decreased the proportion of CD62L+CD4+ and CD62L+CD8+ cells in MLN, whereas it upregulated the gene expression of OX40L, CD11c, and IL-1β and downregulated the gene expression of IL-17α. In conclusion, the cocoa diet induced tolerance in an oral sensitization model accompanied by changes in MLN that could contribute to this effect, suggesting its potential implication in the prevention of food allergies.

O Pabst, Allan Mowat (2012)
Oral tolerance is the state of local and systemic immune unresponsiveness that is induced by oral administration of innocuous antigen such as food proteins. An analogous but more local process also regulates responses to commensal bacteria in the large intestine and, together, mucosally induced tolerance appears to prevent intestinal disorders such as food allergy, celiac disease, and inflammatory bowel diseases. Here we discuss the anatomical basis of antigen uptake and recognition in oral tolerance and highlight possible mechanisms underlying the immunosuppression. We propose a model of stepwise induction of oral tolerance in which specialized populations of mucosal dendritic cells and the unique microenvironment of draining mesenteric lymph nodes combine to generate regulatory T cells that undergo subsequent expansion in the small intestinal lamina propria. The local and systemic effects of these regulatory T cells prevent potentially dangerous hypersensitivity reactions to harmless antigens derived from the intestine and hence are crucial players in immune homeostasis.

Allergy and the gastrointestinal system.

G Vighi, F Marcucci, L. Sensi … (2008)
The gastrointestinal system plays a central role in immune system homeostasis. It is the main route of contact with the external environment and is overloaded every day with external stimuli, sometimes dangerous as pathogens (bacteria, protozoa, fungi, viruses) or toxic substances, in other cases very useful as food or commensal flora. The crucial position of the gastrointestinal system is testified by the huge amount of immune cells that reside within it. Indeed, gut-associated lymphoid tissue (GALT) is the prominent part of mucosal-associated lymphoid tissue (MALT) and represents almost 70% of the entire immune system; moreover, about 80% of plasma cells [mainly immunoglobulin A (IgA)-bearing cells] reside in GALT. GALT interacts strictly with gastrointestinal functions in a dynamic manner; for instance, by increasing intestinal permeability in replay to particular stimulations, or orientating the immune response towards luminal content, allowing either tolerance or elimination/degradation of luminal antigens, or sometimes provoking damage to the intestinal mucosa, such as in coeliac disease or food allergy. The immune mechanisms implicated in these actions are very complex and belong to both innate and adaptive immunity; innate immunity supplies an immediate non-specific response that is indispensable before specific adaptive immunity, which needs 7-10 days to be efficacious, takes place. The results of their interactions depend upon different contexts in which contact with external agents occurs and may change according to different genetic settings of the hosts.

Cocoa and chocolate in human health and disease.

Stuart Katz, Kim Doughty, Ather Ali (2011)
Cocoa contains more phenolic antioxidants than most foods. Flavonoids, including catechin, epicatechin, and procyanidins predominate in antioxidant activity. The tricyclic structure of the flavonoids determines antioxidant effects that scavenge reactive oxygen species, chelate Fe2+ and Cu+, inhibit enzymes, and upregulate antioxidant defenses. The epicatechin content of cocoa is primarily responsible for its favorable impact on vascular endothelium via its effect on both acute and chronic upregulation of nitric oxide production. Other cardiovascular effects are mediated through anti-inflammatory effects of cocoa polyphenols, and modulated through the activity of NF-κB. Antioxidant effects of cocoa may directly influence insulin resistance and, in turn, reduce risk for diabetes. Further, cocoa consumption may stimulate changes in redox-sensitive signaling pathways involved in gene expression and the immune response. Cocoa can protect nerves from injury and inflammation, protect the skin from oxidative damage from UV radiation in topical preparations, and have beneficial effects on satiety, cognitive function, and mood. As cocoa is predominantly consumed as energy-dense chocolate, potential detrimental effects of overconsumption exist, including increased risk of weight gain. Overall, research to date suggests that the benefits of moderate cocoa or dark chocolate consumption likely outweigh the risks.