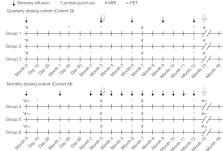 The safety, pharmacokinetics, and effect on peripheral and central amyloid β (Aβ) of multiple doses of ponezumab, an anti-Aβ monoclonal antibody, were characterized in subjects with mild-to-moderate Alzheimer's disease treated for 1 year.

Both ponezumab dosing schedules were generally safe and well tolerated but did not alter CSF biomarkers, brain amyloid burden, or clinical outcomes.

Dennis Selkoe,  John Hardy (2016)
Abstract Despite continuing debate about the amyloid β‐protein (or Aβ hypothesis, new lines of evidence from laboratories and clinics worldwide support the concept that an imbalance between production and clearance of Aβ42 and related Aβ peptides is a very early, often initiating factor in Alzheimer's disease (AD). Confirmation that presenilin is the catalytic site of γ‐secretase has provided a linchpin: all dominant mutations causing early‐onset AD occur either in the substrate (amyloid precursor protein, APP) or the protease (presenilin) of the reaction that generates Aβ. Duplication of the wild‐type APP gene in Down's syndrome leads to Aβ deposits in the teens, followed by microgliosis, astrocytosis, and neurofibrillary tangles typical of AD. Apolipoprotein E4, which predisposes to AD in > 40% of cases, has been found to impair Aβ clearance from the brain. Soluble oligomers of Aβ42 isolated from AD patients' brains can decrease synapse number, inhibit long‐term potentiation, and enhance long‐term synaptic depression in rodent hippocampus, and injecting them into healthy rats impairs memory. The human oligomers also induce hyperphosphorylation of tau at AD‐relevant epitopes and cause neuritic dystrophy in cultured neurons. Crossing human APP with human tau transgenic mice enhances tau‐positive neurotoxicity. In humans, new studies show that low cerebrospinal fluid (CSF) Aβ42 and amyloid‐PET positivity precede other AD manifestations by many years. Most importantly, recent trials of three different Aβ antibodies (solanezumab, crenezumab, and aducanumab) have suggested a slowing of cognitive decline in post hoc analyses of mild AD subjects. Although many factors contribute to AD pathogenesis, Aβ dyshomeostasis has emerged as the most extensively validated and compelling therapeutic target.

The amyloid hypothesis of Alzheimer's disease: progress and problems on the road to therapeutics.

D. Selkoe,  John Hardy (2002)
It has been more than 10 years since it was first proposed that the neurodegeneration in Alzheimer's disease (AD) may be caused by deposition of amyloid beta-peptide (Abeta) in plaques in brain tissue. According to the amyloid hypothesis, accumulation of Abeta in the brain is the primary influence driving AD pathogenesis. The rest of the disease process, including formation of neurofibrillary tangles containing tau protein, is proposed to result from an imbalance between Abeta production and Abeta clearance.

Jeff Sevigny,  Ping Chiao,  Thierry Bussière … (2016)
Alzheimer's disease (AD) is characterized by deposition of amyloid-β (Aβ) plaques and neurofibrillary tangles in the brain, accompanied by synaptic dysfunction and neurodegeneration. Antibody-based immunotherapy against Aβ to trigger its clearance or mitigate its neurotoxicity has so far been unsuccessful. Here we report the generation of aducanumab, a human monoclonal antibody that selectively targets aggregated Aβ. In a transgenic mouse model of AD, aducanumab is shown to enter the brain, bind parenchymal Aβ, and reduce soluble and insoluble Aβ in a dose-dependent manner. In patients with prodromal or mild AD, one year of monthly intravenous infusions of aducanumab reduces brain Aβ in a dose- and time-dependent manner. This is accompanied by a slowing of clinical decline measured by Clinical Dementia Rating-Sum of Boxes and Mini Mental State Examination scores. The main safety and tolerability findings are amyloid-related imaging abnormalities. These results justify further development of aducanumab for the treatment of AD. Should the slowing of clinical decline be confirmed in ongoing phase 3 clinical trials, it would provide compelling support for the amyloid hypothesis.