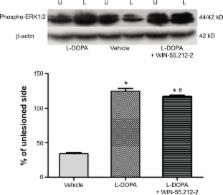 The dopamine precursor L-3,4-dihydroxyphenylalanine (L-DOPA) has been used as an effective drug for treating dopamine depletion-induced Parkinson’s disease (PD). However, long-term administration of L-DOPA produces motor complications. L-DOPA has also been found to modify the two key signaling cascades, protein kinase A/dopamine- and cAMP-regulated phosphoprotein of 32 kDa (DARPP-32) and extracellular signal-regulated kinases 1 and 2 (ERK1/2), in striatal neurons, which are thought to play a pivotal role in forming motor complications. In the present study, we tested the possible effect of a CB1 cannabinoid receptor agonist on L-DOPA-stimulated abnormal behavioral and signaling responses in vivo. Intermittent L-DOPA administration for 3 weeks induced motor fluctuation in a rat model of PD induced by intrastriatal infusion of dopamine-depleting neurotoxin 6-hydroxydopamine (6-OHDA). A single injection of a CB1 cannabinoid receptor agonist WIN-55,212-2 had no effect on L-DOPA-induced motor fluctuation. However, chronic injections of WIN-55,212-2 significantly attenuated abnormal behavioral responses to L-DOPA in 6-OHDA-lesioned rats. Similarly, chronic injections of WIN-55,212-2 influence the L-DOPA-induced alteration of DARPP-32 and ERK1/2 phosphorylation status in striatal neurons. These data provide evidence for the active involvement of CB1 cannabinoid receptors in the regulation of L-DOPA action during PD therapy.

Phosphorylation of DARPP-32 by Cdk5 modulates dopamine signalling in neurons.

A A Fienberg,  Mervyn Bibb,  J Girault … (1999)
The physiological state of the cell is controlled by signal transduction mechanisms which regulate the balance between protein kinase and protein phosphatase activities. Here we report that a single protein can, depending on which particular amino-acid residue is phosphorylated, function either as a kinase or phosphatase inhibitor. DARPP-32 (dopamine and cyclic AMP-regulated phospho-protein, relative molecular mass 32,000) is converted into an inhibitor of protein phosphatase 1 when it is phosphorylated by protein kinase A (PKA) at threonine 34. We find that DARPP-32 is converted into an inhibitor of PKA when phosphorylated at threonine 75 by cyclin-dependent kinase 5 (Cdk5). Cdk5 phosphorylates DARPP-32 in vitro and in intact brain cells. Phospho-Thr 75 DARPP-32 inhibits PKA in vitro by a competitive mechanism. Decreasing phospho-Thr 75 DARPP-32 in striatal slices, either by a Cdk5-specific inhibitor or by using genetically altered mice, results in increased dopamine-induced phosphorylation of PKA substrates and augmented peak voltage-gated calcium currents. Thus DARPP-32 is a bifunctional signal transduction molecule which, by distinct mechanisms, controls a serine/threonine kinase and a serine/threonine phosphatase.

Dopamine released from 5-HT terminals is the cause of L-DOPA-induced dyskinesia in parkinsonian rats.

Manolo Carta,  Thomas Carlsson,  Deniz Kirik … (2007)
In patients with Parkinson's disease, the therapeutic efficacy of L-DOPA medication is gradually lost over time, and abnormal involuntary movements, dyskinesias, gradually emerge as a prominent side-effect in response to previously beneficial doses of the drug. Here we show that dyskinesia induced by chronic L-DOPA treatment in rats with 6-hydroxydopamine-induced lesions of the nigrostriatal dopamine pathway is critically dependent on the integrity and function of the serotonergic system. Removal of the serotonin afferents, or dampening of serotonin neuron activity by 5-HT1A and 5-HT1B agonist drugs, resulted in a near-complete block of the L-DOPA-induced dyskinesias, suggesting that dysregulated dopamine release from serotonin terminals is the prime trigger of dyskinesia in the rat Parkinson's disease model. In animals with complete dopamine lesions, the spared serotonin innervation was unable to sustain the therapeutic effect of L-DOPA, suggesting that dopamine released as a 'false transmitter' from serotonin terminals is detrimental rather than beneficial. The potent synergistic effect of low doses of 5-HT1A and 5-HT1B agonists to suppress dyskinesia, without affecting the anti-parkinsonian effect of L-DOPA in presence of spared dopamine terminals, suggests an early use of these drugs to counteract the development of dyskinesia in Parkinson's disease patients.

ERK phosphorylation and FosB expression are associated with L-DOPA-induced dyskinesia in hemiparkinsonian mice.

Nancy Pavon,  Ainhoa Mendialdua,  Rosario Moratalla … (2006)
The dopamine precursor 3,4-dihydroxyphenyl-L-alanine (L-DOPA) is currently the most efficacious noninvasive therapy for Parkinson's disease. A major complication of this therapy, however, is the appearance of the abnormal involuntary movements known as dyskinesias. We have developed a model of L-DOPA-induced dyskinesias in mice that reproduces the main clinical features of dyskinesia in humans. Dyskinetic symptoms were triggered by repetitive administration of a constant dose of L-DOPA (25 mg/kg, twice a day, for 25 days) in unilaterally 6-hydroxydopamine (6-OHDA) lesioned mice. Mice were examined for behavior, expression of FosB, neuropeptides, and externally regulated kinase (ERK) phosphorylation. Dyskinetic symptoms appear toward the end of the first week of treatment and are associated with L-DOPA-induced changes in DeltaFosB and prodynorphin expression. L-DOPA also induces activation of ERK1/2 in the dopamine-depleted striatum. Interestingly, elevated FosB/DeltaFosB expression occurs exclusively within completely lesioned regions of the striatum, displaying an inverse correlation with remaining dopaminergic terminals. Following acute L-DOPA treatment, FosB expression occurs in direct striatal output neurons, whereas chronic L-DOPA also induces FosB expression in nitric oxide synthase-positive striatal interneurons. This model provides a system in which genetic manipulation of individual genes can be used to elucidate the molecular mechanisms responsible for the development and expression of dyskinesia.