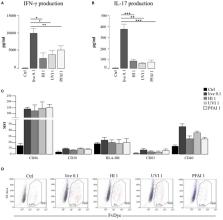 Understanding Staphylococcus aureus ( S. aureus)–host immune system interaction is crucial to meet the tremendous medical need associated with this life-threatening bacterial infection. Given the crucial role of dendritic cells (DC) in dictating immune responses upon microbial challenge, we investigated how the bacterial viability and the conservation of structural integrity influence the response of human DC to S. aureus. To this end, human primary DC were stimulated with the methicillin-resistant S. aureus USA300 live strain, USA300 inactivated by heat (HI), ultraviolet irradiation (UVI), or paraformaldehyde treatment (PFAI) and subsequently analyzed for cell phenotype and immune-modulatory properties. Although no differences in terms of DC viability and maturation were observed when DC were stimulated with live or inactivated bacteria, the production of IL-12, IL-23, and other cytokines differed significantly. The Th1 and Th17 expansion was also more pronounced in response to live vs. inactivated S. aureus. Interestingly, cytokine production in DC treated with live and inactivated USA300 required phagocytosis, whereas blocking endosomal Toll-like receptor signaling mainly reduced the cytokine release by live and HI USA300. A further analysis of IFN-β signaling revealed the induction of a cyclic GMP-AMP synthase stimulator of interferon genes (cGAS-STING)-independent and IRF3-dependent signaling pathway(s) in UVI-stimulated DC. This study underscores the capacity of human DC to discriminate between live and inactivated S. aureus and, further, indicates that DC may represent a valuable experimental setting to test different inactivation methods with regard to the retention of S. aureus immunoregulatory properties. These and further insights may be useful for the development of novel therapeutic and prophylactic anti- S. aureus vaccine strategies.

Viral infection and Toll-like receptor agonists induce a differential expression of type I and lambda interferons in human plasmacytoid and monocyte-derived dendritic cells.

Maria Remoli,  E M Coccia,  Roberto Lande … (2004)
In humans, the type I interferon (IFN) family consists of 13 IFN-alpha subtypes, IFN-beta and IFN-omicron the newly discovered IFN-like family consists of IFN-lambda1, -lambda2 and -lambda3. We have investigated the expression of type I and lambda IFN genes following virus infections or Toll-like receptor (TLR) triggering in monocyte-derived DC (MDDC) and plasmacytoid DC (pDC). We found that all IFN-alpha, -beta, -omicron and -lambda subtypes are expressed in influenza-virus-infected MDDC or pDC. Conversely, differential type I IFN gene transcription was induced in MDDC and pDC stimulated by specific TLR agonists. TLR-9 stimulation by CpG DNA induced the expression of all IFN-alpha, -beta, -omicron and -lambda subtypes in pDC, whereas TLR-4 stimulation by LPS, or TLR-3 stimulation by poly I:C, induced only IFN-beta and IFN-lambda gene expression in MDDC. The expression pattern of IFN regulatory factor (IRF)-5 and IRF-7 in MDDC and pDC was also determined. IRF-5 was constitutively expressed in the two DC subsets whereas IRF-7 was constitutive in pDC but its expression was induced along MDDC maturation. Overall, our data indicate that the coordinated expression of IFN-lambda with IFN-beta would be of crucial importance for the maturation of DC.

Joon Cho,  L. Miller (2011)
Complications arising from cutaneous and soft tissue infections with Staphylococcus aureus are a major clinical problem owing to the high incidence of these infections and the widespread emergence of antibiotic-resistant bacterial strains. If prophylactic vaccines or immunotherapy for certain patient populations are to be developed as an alternative to antibiotics, it will be essential to better understand the immune mechanisms that provide protection against S. aureus skin infections. Recent discoveries have identified a key role for interleukin-1 (IL-1)- and IL-17-mediated immune responses in promoting neutrophil recruitment to the site of infection in the skin, a process that is required for host defence and bacterial clearance. This Review describes these new insights and discusses their potential impact on immune-based therapies and vaccination strategies.

J. Magarian Blander,  Leif E Sander (2012)
Pattern recognition by the innate immune system enables the detection of microorganisms, but how the level of microbial threat is evaluated - a process that is crucial for eliciting measured antimicrobial responses with minimal inflammatory tissue damage - is less well understood. New evidence has shown that features of microbial viability can be detected by the immune system and thereby induce robust responses that are not warranted for dead microorganisms. Here, we propose five immune checkpoints that, as defined here, collectively determine the gravity of microbial encounters.

This article was submitted to Microbial Immunology, a section of the journal Frontiers in Immunology