Cutaneous Carcinosarcoma with Metastasis to the Parotid Gland 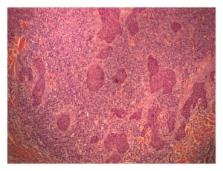 Cutaneous carcinosarcoma is a rare malignancy that exhibits both mesenchymal and epithelial components. It is similar to nonmelanoma skin cancers in terms of risk and prognostic factors. However, these malignancies are known to have a propensity for local recurrence and metastasis, even with adequate resection margins. Here we report a case of metastatic cutaneous carcinosarcoma to the parotid gland and review the relevant literature.

Stephen G. Oliver, L. J. Zwi, John M. Miller … (2005)
Biphasic sarcomatoid carcinoma (BSC), or carcinosarcoma, is an uncommon biphasic neoplasm that has been reported in diverse anatomical sites. The tumor is composed of a malignant epithelial component intimately associated with a malignant mesenchymal component, which may be homologous or heterologous. Twenty-three cases of primary cutaneous BSC have been reported in the English literature. In only eight of these cases was basal cell carcinoma the epithelial component. We report a further four cases of primary cutaneous biphasic basal cell carcinoma, and include the clinical, histological and immunohistochemical features. The four cases showed basal cell carcinoma associated with a pleomorphic sarcomatous stroma. In addition, myofibroblastic differentiation and foci of osteoid were present in one case, and leiomyosarcomatous areas in another. The epithelial components were positive for several epithelial markers. The mesenchymal components were positive for vimentin and CD99, and negative for epithelial markers. p53 was positive with equal intensity in both epithelial and mesenchymal components. A significantly worse outcome was observed in patients with tumors measuring 40 mm or more at excision. The sarcomatous component of the tumor is best regarded as a metaplastic transformation of the carcinomatous component. These tumors are potentially aggressive if incompletely excised, and complete resection is recommended.