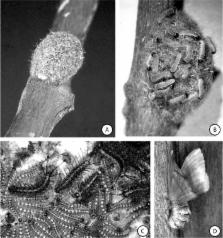 The females of the moths Hylesia metabus have their abdomens covered by urticating hairs looking like micro-arrows and causing a puriginous dermatitis to humans known as “papillonite” in French Guiana and also called yellowtail moth dermatitis or Caripito itch. The densities of the moths show great seasonal and annual variations depending on mechanisms mostly unknown. When H. metabus infestations occur, numerous cases of dermatologic manifestations are reported from people living near the mangrove swamps where the moths are developing. One hundred years after the first “papillonite” epidemic reported from French Guiana in 1912, the data presented herein summarize the actual state of knowledge on H. metabus biology and ecology and on the lepidopterism. Some recommendations are proposed for the surveillance and warning systems of H. metabus infestations and to avoid contact with the moths. Research priorities are suggested to improve the control against this problem emerging between nuisance and public health.

JAMES H. DIAZ (2005)
Caterpillars are the wormlike, larval forms of butterflies and moths of the insect order Lepidoptera. Next to flies, lepidopterans are the most abundant arthropods with more than 165,000 species worldwide, and with most species posing no human threats. However, caterpillar species from approximately 12 families of moths or butterflies worldwide can inflict serious human injuries ranging from urticarial dermatitis and atopic asthma to osteochondritis, consumption coagulopathy, renal failure, and intracerebral hemorrhage. Unlike bees and wasps, envenoming or stinging caterpillars do not possess stingers or modified ovipositors attached to venom glands, but instead bear highly specialized external nettling or urticating hairs and breakaway spines or setae to defend against attacks by predators and enemies. Since the 1970s, there have been increasing reports of mass dermatolgic, pulmonary, and systemic reactions following caterpillar encounters throughout the world.

Eric Hossler (2010)
Caterpillars and moths (order Lepidoptera) are uncommonly recognized causes of adverse cutaneous reactions, such as localized stings, papular dermatitis, and urticarial wheals. These reactions are typically mild and self-limited; however, in South America, the sting of Lonomia caterpillars can cause a potentially fatal hemorrhagic diathesis related to massive fibrinolysis. In addition, ocular inflammation and prominent arthralgias have been reported to be caused by caterpillar exposures. Therapies for mucocutaneous reactions to Lepidoptera are largely empiric, with the exception of antivenin against Lonomia obliqua envenomation. Part II of this two-part series on caterpillars and moths reviews the varied symptoms caused by Lepidopteran exposures, reviews the differential diagnosis, and discusses appropriate treatment algorithms.

Günter Tovar,  Ulf Lundberg,  Ferdinand Salazar … (2007)
The Hylesia genus comprises a group of Neotropical moths ubiquitous in the Americas from Arizona to Argentina. One of the species of the Hylesia genus in Venezuela, French Guyana, and Trinidad has been identified as Hylesia metabus (Cramer 1775) (Lepidoptera: Saturniidae). In Venezuela, these moths are found in abundance in the mangrove (Avicennia spp.) swamps surrounding the Gulf of Paria and the Orinoco Delta in the eastern part of the country. During the mating season, the female adults shed copious amounts of urticating setae in the air, producing a severe papulovesicular dermatitis among the population in the affected areas. The females also use their urticating setae to protect the eggs during the hatching period. In the current study, we have isolated and partially characterized proteins with proinflammatory properties from the urticating setae in the egg-nests by using sodium dodecyl sulfate-polyacrylamide gel electrophoresis and anionic exchange-high-performance liquid chromatography (HPLC). We also have studied the biological response of the egg-nest extract and the HPLC purified fractions by inoculation in guinea pigs; and, analyzing the tissue samples by means of histopathological methods. The results of this study show that the extracted venom and HPLC purified subcomponents give rise to an intense inflammatory reaction characterized by massive infiltration of inflammatory cells, echymoses, and vascular degeneration. Chromatographic separation showed that the venom was made up of proteins having selectively vasodegenerative-fibrinolytic or proinflammatory-quimotactic properties.