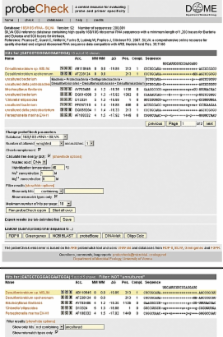 The web server probeCheck, freely accessible at http://www.microbial-ecology.net/probecheck, provides a pivotal forum for rapid specificity and coverage evaluations of probes and primers against selected databases of phylogenetic and functional marker genes. Currently, 24 widely used sequence collections including the Ribosomal Database Project (RDP) II, Greengenes, SILVA and the Functional Gene Pipeline/Repository can be queried. For this purpose, probeCheck integrates a new online version of the popular ARB probe match tool with free energy (ΔG) calculations for each perfectly matched and mismatched probe-target hybrid, allowing assessment of the theoretical binding stabilities of oligo-target and non-target hybrids. For each output sequence, the accession number, the GenBank taxonomy and a link to the respective entry at GenBank, EMBL and, if applicable, the query database are displayed. Filtering options allow customizing results on the output page. In addition, probeCheck is linked with probe match tools of RDP II and Greengenes, NCBI blast, the Oligonucleotide Properties Calculator, the two-state folding tool of the DINAMelt server and the rRNA-targeted probe database probeBase. Taken together, these features provide a multifunctional platform with maximal flexibility for the user in the choice of databases and options for the evaluation of published and newly developed probes and primers.

Warren Kibbe (2007)
We developed OligoCalc as a web-accessible, client-based computational engine for reporting DNA and RNA single-stranded and double-stranded properties, including molecular weight, solution concentration, melting temperature, estimated absorbance coefficients, inter-molecular self-complementarity estimation and intra-molecular hairpin loop formation. OligoCalc has a familiar ‘calculator’ look and feel, making it readily understandable and usable. OligoCalc incorporates three common methods for calculating oligonucleotide-melting temperatures, including a nearest-neighbor thermodynamic model for melting temperature. Since it first came online in 1997, there have been more than 900 000 accesses of OligoCalc from nearly 200 000 distinct hosts, excluding search engines. OligoCalc is available at http://basic.northwestern.edu/biotools/OligoCalc.html, with links to the full source code, usage patterns and statistics at that link as well.

J. R. Cole,  B. Chai,  R. J. Farris … (2006)
Substantial new features have been implemented at the Ribosomal Database Project in response to the increased importance of high-throughput rRNA sequence analysis in microbial ecology and related disciplines. The most important changes include quality analysis, including chimera detection, for all available rRNA sequences and the introduction of myRDP Space, a new web component designed to help researchers place their own data in context with the RDP's data. In addition, new video tutorials describe how to use RDP features. Details about RDP data and analytical functions can be found at the RDP-II website ().

Nicholas Markham,  Michael Zuker (2005)
The DINAMelt web server simulates the melting of one or two single-stranded nucleic acids in solution. The goal is to predict not just a melting temperature for a hybridized pair of nucleic acids, but entire equilibrium melting profiles as a function of temperature. The two molecules are not required to be complementary, nor must the two strand concentrations be equal. Competition among different molecular species is automatically taken into account. Calculations consider not only the heterodimer, but also the two possible homodimers, as well as the folding of each single-stranded molecule. For each of these five molecular species, free energies are computed by summing Boltzmann factors over every possible hybridized or folded state. For temperatures within a user-specified range, calculations predict species mole fractions together with the free energy, enthalpy, entropy and heat capacity of the ensemble. Ultraviolet (UV) absorbance at 260 nm is simulated using published extinction coefficients and computed base pair probabilities. All results are available as text files and plots are provided for species concentrations, heat capacity and UV absorbance versus temperature. This server is connected to an active research program and should evolve as new theory and software are developed. The server URL is .