Clinical use of pasireotide for Cushing’s disease in adults 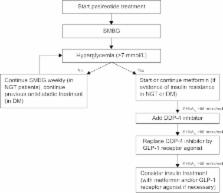 This is a novel multireceptor ligand somatostatin (SST) analog with a high binding affinity for SST receptor 5, the predominant receptor in human corticotroph adenomas that is not downregulated by high cortisol levels (as SST receptor 2 is). Pasireotide has been recently approved by the European Medical Agency and the US Food and Drug Administration for treating adults with CD with recurrent hypercortisolism after surgery, or for whom surgery is not an option. A dose of 600–1,200 μg twice a day can normalize urinary free cortisol levels after 3 months of treatment in up to 28% of patients, reducing their blood pressure and improving their weight, lipid profile, and quality of life. Combining pasireotide with cabergoline to achieve a greater hormone response can normalize cortisol secretion in 50% of patients, and adding ketoconazole induces biochemical control in most patients with CD.

The adverse effects of pasireotide are similar to those of other SST analogs, including diarrhea, nausea, and biliary sludge or gallstones. Hyperglycemia is common during pasireotide treatment, which affects the secretion of pancreatic insulin and intestinal glucagon-like peptide 1. Self-monitoring is essential to achieve good metabolic control, and endocrinologists should first administer metformin if insulin resistance is evident and then add dipeptidyl peptidase 4 inhibitors/glucagon-like peptide 1 receptor agonists or insulin.

In recent years, medical treatment with pasireotide has been proposed as monotherapy for adults with CD characterized by mild to moderate hypercortisolemia, as well as in combination with other available therapies. It is generally well-tolerated, but endocrinologists need to monitor glucose levels to ensure prompt treatment.

A 12-month phase 3 study of pasireotide in Cushing's disease.

Mario Maldonado,  John Newell,  B. Biller … (2012)
Cushing's disease is associated with high morbidity and mortality. Pasireotide, a potential therapy, has a unique, broad somatostatin-receptor-binding profile, with high binding affinity for somatostatin-receptor subtype 5. In this double-blind, phase 3 study, we randomly assigned 162 adults with Cushing's disease and a urinary free cortisol level of at least 1.5 times the upper limit of the normal range to receive subcutaneous pasireotide at a dose of 600 μg (82 patients) or 900 μg (80 patients) twice daily. Patients with urinary free cortisol not exceeding 2 times the upper limit of the normal range and not exceeding the baseline level at month 3 continued to receive their randomly assigned dose; all others received an additional 300 μg twice daily. The primary end point was a urinary free cortisol level at or below the upper limit of the normal range at month 6 without an increased dose. Open-label treatment continued through month 12. Twelve of the 82 patients in the 600-μg group and 21 of the 80 patients in the 900-μg group met the primary end point. The median urinary free cortisol level decreased by approximately 50% by month 2 and remained stable in both groups. A normal urinary free cortisol level was achieved more frequently in patients with baseline levels not exceeding 5 times the upper limit of the normal range than in patients with higher baseline levels. Serum and salivary cortisol and plasma corticotropin levels decreased, and clinical signs and symptoms of Cushing's disease diminished. Pasireotide was associated with hyperglycemia-related adverse events in 118 of 162 patients; other adverse events were similar to those associated with other somatostatin analogues. Despite declines in cortisol levels, blood glucose and glycated hemoglobin levels increased soon after treatment initiation and then stabilized; treatment with a glucose-lowering medication was initiated in 74 of 162 patients. The significant decrease in cortisol levels in patients with Cushing's disease who received pasireotide supports its potential use as a targeted treatment for corticotropin-secreting pituitary adenomas. (Funded by Novartis Pharma; ClinicalTrials.gov number, NCT00434148.).

C Bruns,  Fraser I Lewis,  G. Weckbecker … (2002)
The aim of the present study was to identify a small, metabolically stable somatotropin release inhibiting factor (SRIF) analog with a more universal binding profile similar to that of natural somatostatin, resulting in improved pharmacological properties and hence new therapeutic uses. A rational drug design approach was followed by synthesizing alanine-substituted SRIF-14 analogs to determine the importance of single amino acids in SRIF-14 for SRIF receptor subtype binding. The incorporation of structural elements of SRIF-14 in a stable cyclohexapeptide template in the form of modified unnatural amino acids resulted in the identification of the novel cyclohexapeptide SOM230. SOM230 binds with high affinity to SRIF receptor subtypes sst1, sst2, sst3 and sst5 and displays a 30- to 40-fold higher affinity for sst1 and sst5 than Sandostatin (octreotide; SMS 201-995) or Somatuline (BIM 23014). In vitro, SOM230 effectively inhibited the growth hormone releasing hormone (GHRH)-induced growth hormone (GH) release in primary cultures of rat pituitary cells with an IC(50) of 0.4+/-0.1 nmol/l (n=5). In vivo, SOM230 also potently suppressed GH secretion in rats. The ED(50) values determined at 1 h and 6 h post injection of SOM230 indicated its very long duration of action in vivo. This property was also reflected in pharmacokinetic studies comparing plasma levels of SMS 201-995 and SOM230 after subcutaneous application. Whereas SMS 201-995 had a terminal elimination half life of 2 h, this was markedly prolonged in SOM230-treated animals (t(1/2)=23 h). Furthermore, in rats SOM230 demonstrated a much higher efficacy in lowering plasma insulin-like growth factor-I (IGF-I) levels compared with SMS 201-995. The infusion of 10 microg/kg/h of SOM230 using subcutaneously implanted minipumps decreased plasma IGF-I levels far more effectively than SMS 201-995. After 126 days of continuous infusion of SOM230 plasma IGF-I levels were decreased by 75% of placebo-treated control animals. For comparison SMS 201-995, when used under the same experimental conditions, resulted in only a 28% reduction of plasma IGF-I levels, indicating a much higher efficacy for SOM230 in this animal model. It is important to note that the inhibitory effect of SOM230 was relatively selective for GH and IGF-I in that insulin and glucagon secretion was inhibited only at higher doses of SOM230. This lack of potent inhibition of insulin and glucagon release was also reflected in the lack of effect on plasma glucose levels. Even after high dose treatment over 126 days no obvious adverse side effects were noticed, including changes in plasma glucose levels. We have identified a novel short synthetic SRIF peptidomimetic, which exhibits high affinity binding to four of the five human SRIF receptor subtypes and has potent, long lasting inhibitory effects on GH and IGF-I release. Therefore SOM230 is a promising development candidate for effective GH and IGF-I inhibition and is currently under evaluation in phase 1 clinical trials.

Expert consensus document: A consensus on the medical treatment of acromegaly.

Andrea Giustina,  Philippe Chanson,  David Kleinberg … (2014)
In March 2013, the Acromegaly Consensus Group met to revise and update guidelines for the medical treatment of acromegaly. The meeting comprised experts skilled in the medical management of acromegaly. The group considered treatment goals covering biochemical, clinical and tumour volume outcomes, and the place in guidelines of somatostatin receptor ligands, growth hormone receptor antagonists and dopamine agonists, and alternative modalities for treatment including combination therapy and novel treatments. This document represents the conclusions of the workshop consensus.