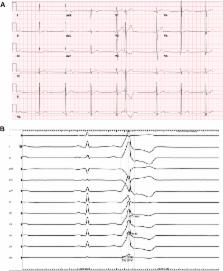 John Sapp,  Christopher Beeckler,  Robert N. Pike … (2013)
Ablation of ventricular tachycardia (VT) is sometimes unsuccessful when ablation lesions are of insufficient depth to reach arrhythmogenic substrate. We report the initial experience with the use of a catheter with an extendable/retractable irrigated needle at the tip capable of intramyocardial mapping and ablation.