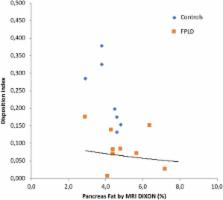 Pamela Nurenberg,  Jason S. Reingold,  Nigel Browning … (2005)
Despite the increasing prevalence of nonalcoholic fatty liver disease (NAFLD), the criteria used to diagnose the disorder remain poorly defined. Localized proton magnetic resonance spectroscopy (MRS) accurately measures hepatic triglyceride content (HTGC) but has been used only in small research studies. Here, MRS was used to analyze the distribution of HTGC in 2,349 participants from the Dallas Heart Study (DHS). The reproducibility of the procedure was validated by showing that duplicate HTGC measurements were high correlated (r = 0.99, P < 0.001) and that the coefficient of variation between measurements was low (8.5%). Intake of a high-fat meal did not significantly affect the measurements, and values were similar when measurements were made from the right and left hepatic lobes. To determine the "upper limit of normal" for HTGC, the distribution of HTGC was examined in the 345 subjects from the DHS who had no identifiable risk factors for hepatic steatosis (nonobese, nondiabetic subjects with minimal alcohol consumption, normal liver function tests, and no known liver disease). The 95th percentile of HTGC in these subjects was 5.56%, which corresponds to a hepatic triglyceride level of 55.6 mg/g. With this value as a cutoff, the prevalence of hepatic steatosis in Dallas County was estimated to be 33.6%. Thus MRS provides a sensitive, quantitative, noninvasive method to measure HTGC and, when applied to a large urban US population, revealed a strikingly high prevalence of hepatic steatosis.

Marcus Dixon (1984)
Simple modification of a spin echo imaging pulse sequence generates useful spectroscopic information at 0.35 T. New images are produced that show water only, fat only, and the difference between water and fat intensity. Imaging speed, spatial resolution, and signal-to-noise ratio are comparable with ordinary imaging. The method provides new parameters for tissue characterization and improved contrast between some organs.