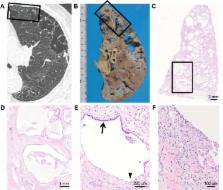 Matthew Jankowich,  Sharon Rounds (2012)
There is increasing clinical, radiologic, and pathologic recognition of the coexistence of emphysema and pulmonary fibrosis in the same patient, resulting in a clinical syndrome known as combined pulmonary fibrosis and emphysema (CPFE) that is characterized by dyspnea, upper-lobe emphysema, lower-lobe fibrosis, and abnormalities of gas exchange. This syndrome frequently is complicated by pulmonary hypertension, acute lung injury, and lung cancer. The CPFE syndrome typically occurs in male smokers, and the mortality associated with this condition, especially if pulmonary hypertension is present, is significant. In this review, we explore the current state of the literature and discuss etiologic factors and clinical characteristics of the CPFE syndrome.

The prevalence of pulmonary fibrosis combined with emphysema in patients with lung cancer.

Vincent Cottin,  Delphine Gamondes,  Hilario Nunes … (2010)
Connective tissue diseases (CTDs) are associated with several interstitial lung diseases. The aim of this study was to describe the recently individualized syndrome of combined pulmonary fibrosis and emphysema (CPFE) in a population of patients with CTD. In this multicenter study, we retrospectively investigated data from patients with CTD who also have CPFE. The demographic characteristics of the patients, the results of pulmonary function testing, high-resolution computed tomography, lung biopsy, and treatment, and the outcomes of the patients were analyzed. Data from 34 patients with CTD who were followed up for a mean±SD duration of 8.3±7.0 years were analyzed. Eighteen of the patients had rheumatoid arthritis (RA), 10 had systemic sclerosis (SSc), 4 had mixed or overlap CTD, and 2 had other CTDs. The mean±SD age of the patients was 57±11 years, 23 were men, and 30 were current or former smokers. High-resolution computed tomography revealed emphysema of the upper lung zones and pulmonary fibrosis of the lower zones in all patients, and all patients exhibited dyspnea during exercise. Moderately impaired pulmonary function test results and markedly reduced carbon monoxide transfer capacity were observed. Five patients with SSc exhibited pulmonary hypertension. Four patients died during followup. Patients with CTD and CPFE were significantly younger than an historical control group of patients with idiopathic CPFE and more frequently were female. In addition, patients with CTD and CPFE had higher lung volumes, lower diffusion capacity, higher pulmonary pressures, and more frequently were male than those with CTD and lung fibrosis without emphysema. CPFE warrants inclusion as a novel, distinct pulmonary manifestation within the spectrum of CTD-associated lung diseases in smokers or former smokers, especially in patients with RA or SSc. Copyright © 2011 by the American College of Rheumatology.