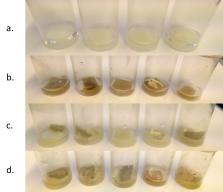 As a highly resistant polymer family, polyurethanes ( PU) are responsible for increasing environmental issues. Then, PU biodegradation is a challenging way to develop sustainable waste management processes based on biological recycling. Since the metabolic diversity of fungi is a major asset for polymer degradation, nearly thirty strains were isolated from sampling on six different PU wastes‐containing environments. A screening of the fungi on four thermoplastic PU ( TPU) with different macromolecular architectures led to the selection of three strains able to use two polyester PU as sole carbon source: Alternaria sp., Penicillium section Lanata‐Divaricata and Aspergillus section flavi. Weight loss, FT‐ IR, Scanning Electron Microscopy and Size Exclusion Chromatography analyses revealed that these three fungi degrade slightly and similarly a fatty acid dimer‐based TPU while variability of degradation was noticed on a polycaprolactone‐based TPU. On this last TPU, robust analysis of the degraded polymers showed that the Penicillium strain was the best degrading microorganism. Membrane enzymes seemed to be involved in this degradation. It is the first time that a strain of Penicillium of the section Lanata‐Divaricata displaying PU biodegradation ability is isolated. These newly discovered fungi are promising for the development of polyester PU waste management process.

Marine pollution. Plastic waste inputs from land into the ocean.

Jenna R Jambeck,  Roland Geyer,  Chris Wilcox … (2015)
Plastic debris in the marine environment is widely documented, but the quantity of plastic entering the ocean from waste generated on land is unknown. By linking worldwide data on solid waste, population density, and economic status, we estimated the mass of land-based plastic waste entering the ocean. We calculate that 275 million metric tons (MT) of plastic waste was generated in 192 coastal countries in 2010, with 4.8 to 12.7 million MT entering the ocean. Population size and the quality of waste management systems largely determine which countries contribute the greatest mass of uncaptured waste available to become plastic marine debris. Without waste management infrastructure improvements, the cumulative quantity of plastic waste available to enter the ocean from land is predicted to increase by an order of magnitude by 2025.

Identification and nomenclature of the genus Penicillium

C.M. Visagie,  J Houbraken,  J.C. Frisvad … (2014)
Penicillium is a diverse genus occurring worldwide and its species play important roles as decomposers of organic materials and cause destructive rots in the food industry where they produce a wide range of mycotoxins. Other species are considered enzyme factories or are common indoor air allergens. Although DNA sequences are essential for robust identification of Penicillium species, there is currently no comprehensive, verified reference database for the genus. To coincide with the move to one fungus one name in the International Code of Nomenclature for algae, fungi and plants, the generic concept of Penicillium was re-defined to accommodate species from other genera, such as Chromocleista, Eladia, Eupenicillium, Torulomyces and Thysanophora, which together comprise a large monophyletic clade. As a result of this, and the many new species described in recent years, it was necessary to update the list of accepted species in Penicillium. The genus currently contains 354 accepted species, including new combinations for Aspergillus crystallinus, A. malodoratus and A. paradoxus, which belong to Penicillium section Paradoxa. To add to the taxonomic value of the list, we also provide information on each accepted species MycoBank number, living ex-type strains and provide GenBank accession numbers to ITS, β-tubulin, calmodulin and RPB2 sequences, thereby supplying a verified set of sequences for each species of the genus. In addition to the nomenclatural list, we recommend a standard working method for species descriptions and identifications to be adopted by laboratories working on this genus.

Nathalie Lucas,  Christophe Bienaimé,  Christian Belloy … (2008)
Within the frame of the sustainable development, new materials are being conceived in order to increase their biodegradability properties. Biodegradation is considered to take place throughout three stages: biodeterioration, biofragmentation and assimilation, without neglect the participation of abiotic factors. However, most of the techniques used by researchers in this area are inadequate to provide evidence of the final stage: assimilation. In this review, we describe the different stages of biodegradation and we state several techniques used by some authors working in this domain. Validate assimilation (including mineralisation) is an important aspect to guarantee the real biodegradability of items of consumption (in particular friendly environmental new materials). The aim of this review is to emphasise the importance of measure as well as possible, the last stage of the biodegradation, in order to certify the integration of new materials into the biogeochemical cycles. Finally, we give a perspective to use the natural labelling of stable isotopes in the environment, by means of a new methodology based on the isotopic fractionation to validate assimilation by microorganisms.