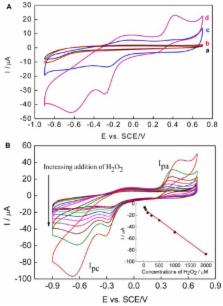 Here we report a facile eco-friendly one-step electrochemical approach for the fabrication of a polypyrrole (PPy), reduced graphene oxide (RGO), and gold nanoparticles (nanoAu) biocomposite on a glassy carbon electrode (GCE). The electrochemical behaviors of PPy–RGO–nanoAu and its application to electrochemical detection of hydrogen peroxide were investigated by cyclic voltammetry. Graphene oxide and pyrrole monomer were first mixed and casted on the surface of a cleaned GCE. After an electrochemical processing consisting of the electrooxidation of pyrrole monomer and simultaneous electroreduction of graphene oxide and auric ions (Au 3+) in aqueous solution, a PPy–RGO–nanoAu biocomposite was synthesized on GCE. Each component of PPy–RGO–nanoAu is electroactive without non-electroactive substance. The obtained PPy–RGO–nanoAu/GCE exhibited high electrocatalytic activity toward hydrogen peroxide, which allows the detection of hydrogen peroxide at a negative potential of about −0.62 V vs. SCE. The amperometric responses of the biosensor displayed a sensitivity of 40 µA/mM, a linear range of 32 µM–2 mM, and a detection limit of 2.7 µM (signal-to-noise ratio = 3) with good stability and acceptable reproducibility and selectivity. The results clearly demonstrate the potential of the as-prepared PPy–RGO–nanoAu biocomposite for use as a highly electroactive matrix for an amperometric biosensor.

A green approach to the synthesis of graphene nanosheets.

Lin Guo,  Feng Wang,  XING XIA … (2009)
Graphene can be viewed as an individual atomic plane extracted from graphite, as unrolled single-walled carbon nanotube or as an extended flat fullerene molecule. In this paper, a facile approach to the synthesis of high quality graphene nanosheets in large scale through electrochemical reduction of exfoliated graphite oxide precursor at cathodic potentials (completely reduced potential: -1.5 V) is reported. This method is green and fast, and will not result in contamination of the reduced material. The electrochemically reduced graphene nanosheets have been carefully characterized by spectroscopic and electrochemical techniques in comparison to the chemically reduced graphene-based product. Particularly, FTIR spectra indicate that a variety of the oxygen-containing functional groups have been thoroughly removed from the graphite oxide plane via electrochemical reduction. The chemically converted materials are not expected to exhibit graphene's electronic properties because of residual defects. Indeed, the high quality graphene accelerates the electron transfer rate in dopamine electrochemistry (DeltaE(p) is as small as 44 mV which is much smaller than that on a glassy carbon electrode). This approach opens up the possibility for assembling graphene biocomposites for electrocatalysis and the construction of biosensors.

Solubilization of carbon nanotubes by Nafion toward the preparation of amperometric biosensors.

Mustafa M Musameh,  Joseph Wang,  Yuehe Lin (2003)
The ability to solubilize single-wall and multiwall carbon nanotubes (CNT) in the presence of the perfluorinated polymer Nafion is described. Such use of Nafion as a solubilizing agent for CNT overcomes a major obstacle for creating CNT-based biosensing devices. Their association with Nafion does not impair the electrocatalytic properties of CNT. The resulting CNT/Nafion modified glassy-carbon electrodes exhibit a strong and stable electrocatalytic response toward hydrogen peroxide. The marked acceleration of the hydrogen peroxide redox process is very attractive for the operation of oxidase-based amperometric biosensors, as illustrated for the highly selective low-potential (-0.05 V vs Ag/AgCl) biosensing of glucose. These findings open the door for using CNT in a wide range of chemical sensors and nanoscale electronic devices.

Facile and controllable electrochemical reduction of graphene oxide and its applications