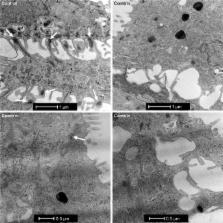 There is now convincing evidence that the airway epithelium drives the pathogenesis of COPD. A major aspect of this is the disease-related reduction in barrier function that is potentiated by dysregulation of tight junction (TJ) protein complexes. However, a significant number of studies using in vitro smoke exposure models have not observed alterations in barrier permeability. We have previously shown that zinc (Zn) is an influential cytoprotective factor for the airway epithelium, and its depletion by cigarette smoke produces disease-related modifications consistent with inflammatory changes in COPD. We hypothesized that Zn deficiency is a significant co-stimulus with cigarette smoke extract (CSE) for potentiating the leaky barrier phenotype exhibited in COPD. We employed an ex vivo model of differentiated human airway epithelium exposed to Zn depletion and CSE to determine the contribution of Zn in maintaining normal epithelial permeability. Western blot analysis demonstrated a significant downregulation of the TJ proteins such as ZO-1 (−1.93-fold, P<0.05) and Claudin-1 (−3.37-fold, P<0.01) with the combination exposure. Assessment of barrier function via paracellular ionic conductance and tracer permeability also showed that Zn depletion was an important factor, which potentiated an increase in epithelial permeability ( P<0.001 for both) compared to Zn depletion or CSE exposures in isolation. Visual inspection of the epithelium using transmission electron microscopy revealed a marked reduction in junction complexes between the adjacent airway epithelial cells treated with a combination of Zn depletion and CSE. These observations identify Zn deficiency as a significant codeterminant with CSE as a factor leading to an increase in airway epithelial permeability. Hence, as Zn dyshomeostasis has been reported in the airway epithelium exposed to chronic cigarette smoke and inflammation, targeting these phenomena may represent a promising strategy to ameliorate the leaky barrier phenotype that is synonymous with COPD.

Elisabetta Dejana,  Michael Potente,  Christopher G. Daly … (2008)
Intercellular junctions mediate adhesion and communication between adjoining cells. Although formed by different molecules, tight junctions (TJs) and adherens junctions (AJs) are functionally and structurally linked, but the signalling pathways behind this interaction are unknown. Here we describe a cell-specific mechanism of crosstalk between these two types of structure. We show that endothelial VE-cadherin at AJs upregulates the gene encoding the TJ adhesive protein claudin-5. This effect requires the release of the inhibitory activity of forkhead box factor FoxO1 and the Tcf-4-beta-catenin transcriptional repressor complex. Vascular endothelial (VE)-cadherin acts by inducing the phosphorylation of FoxO1 through Akt activation and by limiting the translocation of beta-catenin to the nucleus. These results offer a molecular basis for the link between AJs and TJs and explain why VE-cadherin inhibition may cause a marked increase in permeability.

Interleukin-6 regulates the zinc transporter Zip14 in liver and contributes to the hypozincemia of the acute-phase response.

Tolunay Aydemir,  Mitchell Knutson,  Tomas Ganz … (2005)
Infection and inflammation produce systemic responses that include hypozincemia and hypoferremia. The latter involves regulation of the iron transporter ferroportin 1 by hepcidin. The mechanism of reduced plasma zinc is not known. Transcripts of the two zinc transporter gene families (ZnT and Zip) were screened for regulation in mouse liver after turpentine-induced inflammation and LPS administration. Zip14 mRNA was the transporter transcript most up-regulated by inflammation and LPS. IL-6 knockout (IL-6(-/-)) mice did not exhibit either hypozincemia or the induction of Zip14 with turpentine inflammation. However, in IL-6(-/-) mice, LPS produced a milder hypozincemic response but no Zip14 induction. Northern analysis showed Zip14 up-regulation was specific for the liver, with one major transcript. Immunohistochemistry, using an antibody to an extracellular Zip14 epitope, showed both LPS and turpentine increased abundance of Zip14 at the plasma membrane of hepatocytes. IL-6 produced increased expression of Zip14 in primary hepatocytes cultures and localization of the protein to the plasma membrane. Transfection of mZip14 cDNA into human embryonic kidney cells increased zinc uptake as measured by both a fluorescent probe for free Zn(2+) and (65)Zn accumulation, as well as by metallothionein mRNA induction, all indicating that Zip14 functions as a zinc importer. Zip14 was localized in plasma membrane of the transfected cells. These in vivo and in vitro experiments demonstrate that Zip14 expression is up-regulated through IL-6, and that this zinc transporter most likely plays a major role in the mechanism responsible for hypozincemia that accompanies the acute-phase response to inflammation and infection.

N Reynolds,  Hubertus Jersmann,  Jessica Ahern … (2007)
Chronic obstructive pulmonary disease (COPD) is associated with defective efferocytosis (apoptosis and alveolar macrophage [AM] phagocytic function) that may lead to secondary necrosis and tissue damage. We investigated ex vivo AM phagocytic ability and recognition molecules (CD36, integrin alphaVbeta3, CD31, CD91, CD44) using flow cytometry. The transferrin receptor (CD71) was measured as an indicator of monocyte-macrophage differentiation in bronchoalveolar lavage (BAL). Proliferation was assessed with Ki-67. Based on evidence of systemic involvement in COPD, blood from 17 current smokers and 25 ex-smokers with COPD, 22 healthy smokers, and 20 never-smoking control subjects was also investigated. BAL was collected from 10 to 16 subjects in each group. Levels of recognition molecules and cAMP were assessed after exposure of AM to cigarette smoke in vitro. The phagocytic ability of AM was significantly decreased in both COPD groups and in healthy smokers compared with control subjects. However, phagocytic capacity was better in subjects with COPD who had ceased smoking, compared with those who were still smoking. AM from current smokers with COPD and healthy smokers exhibited reduced CD31, CD91, CD44, and CD71, and enhanced Ki-67 compared with healthy never-smoker control subjects. There were no differences in these markers in AM from ex-smokers with COPD compared with control subjects, or in blood monocytes from any group. Suppressive effects of cigarette smoke on AM recognition molecules associated with an increase in cAMP were confirmed in vitro. Our data indicates that a smoking-related reduction in AM phagocytic ability and expression of several important recognition molecules may be at least partially normalized in those subjects with COPD who have ceased smoking.