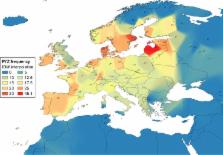 In alpha-1 antitrypsin deficiency (AATD), the Z allele is present in 98% of cases with severe disease, and knowledge of the frequency of this allele is essential from a public health perspective. However, there is a remarkable lack of epidemiological data on AATD worldwide, and many of the data currently used are outdated. Therefore, the objective of this study was to update the knowledge of the frequency of the Z allele to achieve accurate estimates of the prevalence and number of Pi*ZZ genotypes worldwide based on studies performed according to the following criteria: 1) samples representative of the general population, 2) AAT phenotyping characterized by adequate methods, and 3) measurements performed using a coefficient of variation calculated from the sample size and 95% confidence intervals. Studies fulfilling these criteria were used to develop maps with an inverse distance weighted (IDW)-interpolation method, providing numerical and graphical information of Pi*Z distribution worldwide. A total of 224 cohorts from 65 countries were included in the study. With the data provided by these cohorts, a total of 253,404 Pi*ZZ were estimated worldwide: 119,594 in Europe, 91,490 in America and Caribbean, 3,824 in Africa, 32,154 in Asia, 4,126 in Australia, and 2,216 in New Zealand. In addition, the IDW-interpolation maps predicted Pi*Z frequencies throughout the world even in some areas that lack real data. In conclusion, the inclusion of new well-designed studies and the exclusion of the low-quality ones have significantly improved the reliability of results, which may be useful to plan strategies for future research and diagnosis and to rationalize the therapeutic resources available.

Liver disease in alpha1-antitrypsin deficiency detected by screening of 200,000 infants.

T Sveger (1976)
We prosepctively studied 200,000 newborns to determine the frequency and clinical characteristics of alpha1-antitrypsin deficiency. One hundred and twenty Pi Z, 48 Pi SZ, two PI Z-and one Pi S-infants were identified and followed to the age of six months. Fourteen of 120 Pi Z infants had prolonged obstructive jaundice, nine with severe clinical and laboratory evidence of liver disease. Five had only laboratory evidence of liver disease. Eight other Pi Z infants had minimal abnormalities in serum bilirubin and hepatic enzyme activity and variable hepatosplenomegaly. All 22 Pi Z infants with hepatic abnormalities, two thirds of whom were made, appeared healthy at six months of age. Ninety-eight Pi Z infants did not have clinical liver disease, but liver-function tests gave abnormal results in 44 of 84 at three months, and in 36 of 60 at six months of age. The number of small-for-gestational-age infants was greater (P less than 0.001) among those with clinical liver disease. None of the 48 Pi SZ infants had clinical liver disease, but 10 of 42 at three months and one of 22 at six months of age had abnormal liver function. The Pi Z and Pi SZ phenotypes are associated with covert or readily apparent hepatic dysfunction in the first three months of life.

Role of alpha-1 antitrypsin in human health and disease.

Francisco Núñez de Cáceres González,  I Blanco (2014)
Alpha-1 antitrypsin (AAT) deficiency is an under-recognized hereditary disorder associated with the premature onset of chronic obstructive pulmonary disease, liver cirrhosis in children and adults, and less frequently, relapsing panniculitis, systemic vasculitis and other inflammatory, autoimmune and neoplastic diseases. Severe AAT deficiency mainly affects Caucasian individuals and has its highest prevalence (1 : 2000-1 : 5000 individuals) in Northern, Western and Central Europe. In the USA and Canada, the prevalence is 1: 5000-10 000. Prevalence is five times lower in Latin American countries and is rare or nonexistent in African and Asian individuals. The key to successful diagnosis is by measuring serum AAT, followed by the determination of the phenotype or genotype if low concentrations are found. Case detection allows implementation of genetic counselling and, in selected cases, the application of augmentation therapy. Over the past decade, it has been demonstrated that AAT is a broad-spectrum anti-inflammatory, immunomodulatory, anti-infective and tissue-repair molecule. These new capacities are promoting an increasing number of clinical studies, new pharmacological formulations, new patent applications and the search for alternative sources of AAT (including transgenic and recombinant AAT) to meet the expected demand for treating a large number of diseases, inside and outside the context of AAT deficiency. © 2014 The Association for the Publication of the Journal of Internal Medicine.

Estimated numbers and prevalence of PI*S and PI*Z alleles of alpha1-antitrypsin deficiency in European countries.

F Serres,  I Blanco,  Natalie E Bustillo … (2005)
The current study focuses on developing estimates of the numbers of individuals carrying the two most common deficiency alleles, PI*S and PI*Z, for alpha1-antitrypsin deficiency (AT-D) in Europe. Criteria for selection of epidemiological studies were: 1) AT phenotyping performed by isoelectrofocusing or antigen-antibody crossed electrophoresis; 2) rejection of "screening studies"; 3) statistical precision factor score of > or = 5 for Southwest, Western and Northern Europe, > or = 4 for Central Europe, > or = 3 for Eastern Europe; and 4) samples representative of the general population. A total of 75,390 individuals were selected from 21 European countries (one each from Austria, Belgium, Latvia, Hungary, Serbia-Montenegro, Sweden and Switzerland; two each from Denmark, Estonia and Lithuania; three each from Portugal and the UK; four each from Finland, The Netherlands, Norway and Spain; five each from Russia and Germany; six from Poland; eight from Italy; and nine from France). The total AT-D populations of a particular phenotype in the countries selected were: 124,594 ZZ; 560,515 SZ; 16,323,226 MZ; 630,401 SS; and 36,716,819 MS. The largest number of ZZ (5,000-15,000) were in Italy, Spain, Germany, France, the UK, Latvia, Sweden and Denmark, followed by Belgium, Portugal, Serbia-Montenegro, Russia, The Netherlands, Norway and Austria (1,000-2,000), with < 1,000 in each of the remaining countries. A remarkable lack in number of reliable epidemiological studies and marked differences among these European countries and regions within a given country was also found.