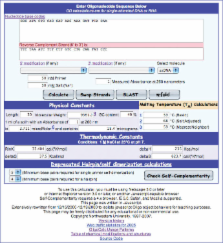 We developed OligoCalc as a web-accessible, client-based computational engine for reporting DNA and RNA single-stranded and double-stranded properties, including molecular weight, solution concentration, melting temperature, estimated absorbance coefficients, inter-molecular self-complementarity estimation and intra-molecular hairpin loop formation. OligoCalc has a familiar ‘calculator’ look and feel, making it readily understandable and usable. OligoCalc incorporates three common methods for calculating oligonucleotide-melting temperatures, including a nearest-neighbor thermodynamic model for melting temperature. Since it first came online in 1997, there have been more than 900 000 accesses of OligoCalc from nearly 200 000 distinct hosts, excluding search engines. OligoCalc is available at http://basic.northwestern.edu/biotools/OligoCalc.html, with links to the full source code, usage patterns and statistics at that link as well.

Thermodynamic parameters for an expanded nearest-neighbor model for formation of RNA duplexes with Watson-Crick base pairs.

Gareth Turner,  X Jiao,  T. Xia … (1998)
Improved thermodynamic parameters for prediction of RNA duplex formation are derived from optical melting studies of 90 oligoribonucleotide duplexes containing only Watson-Crick base pairs. To test end or base composition effects, new sets of duplexes are included that have identical nearest neighbors, but different base compositions and therefore different ends. Duplexes with terminal GC pairs are more stable than duplexes with the same nearest neighbors but terminal AU pairs. Penalizing terminal AU base pairs by 0.45 kcal/mol relative to terminal GC base pairs significantly improves predictions of DeltaG degrees37 from a nearest-neighbor model. A physical model is suggested in which the differential treatment of AU and GC ends accounts for the dependence of the total number of Watson-Crick hydrogen bonds on the base composition of a duplex. On average, the new parameters predict DeltaG degrees37, DeltaH degrees, DeltaS degrees, and TM within 3.2%, 6.0%, 6.8%, and 1.3 degreesC, respectively. These predictions are within the limit of the model, based on experimental results for duplexes predicted to have identical thermodynamic parameters.

Predicting DNA duplex stability from the base sequence.

N L Marky,  Lawrence R. Frank,  Kenneth Breslauer … (1986)
We report the complete thermodynamic library of all 10 Watson-Crick DNA nearest-neighbor interactions. We obtained the relevant thermodynamic data from calorimetric studies on 19 DNA oligomers and 9 DNA polymers. We show how these thermodynamic data can be used to calculate the stability and predict the temperature-dependent behavior of any DNA duplex structure from knowledge of its base sequence. We illustrate our method of calculation by using the nearest-neighbor data to predict transition enthalpies and free energies for a series of DNA oligomers. These predicted values are in excellent agreement with the corresponding values determined experimentally. This agreement demonstrates that a DNA duplex structure thermodynamically can be considered to be the sum of its nearest-neighbor interactions. Armed with this knowledge and the nearest-neighbor thermodynamic data reported here, scientists now will be able to predict the stability (delta G degree) and the melting behavior (delta H degree) of any DNA duplex structure from inspection of its primary sequence. This capability should prove valuable in numerous applications, such as predicting the stability of a probe-gene complex; selecting optimal conditions for a hybridization experiment; deciding on the minimum length of a probe; predicting the influence of a specific transversion or transition on the stability of an affected DNA region; and predicting the relative stabilities of local domains within a DNA duplex.