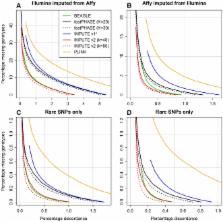 Genotype imputation methods are now being widely used in the analysis of genome-wide association studies. Most imputation analyses to date have used the HapMap as a reference dataset, but new reference panels (such as controls genotyped on multiple SNP chips and densely typed samples from the 1,000 Genomes Project) will soon allow a broader range of SNPs to be imputed with higher accuracy, thereby increasing power. We describe a genotype imputation method (IMPUTE version 2) that is designed to address the challenges presented by these new datasets. The main innovation of our approach is a flexible modelling framework that increases accuracy and combines information across multiple reference panels while remaining computationally feasible. We find that IMPUTE v2 attains higher accuracy than other methods when the HapMap provides the sole reference panel, but that the size of the panel constrains the improvements that can be made. We also find that imputation accuracy can be greatly enhanced by expanding the reference panel to contain thousands of chromosomes and that IMPUTE v2 outperforms other methods in this setting at both rare and common SNPs, with overall error rates that are 15%–20% lower than those of the closest competing method. One particularly challenging aspect of next-generation association studies is to integrate information across multiple reference panels genotyped on different sets of SNPs; we show that our approach to this problem has practical advantages over other suggested solutions.

Large association studies have proven to be effective tools for identifying parts of the genome that influence disease risk and other heritable traits. So-called “genotype imputation” methods form a cornerstone of modern association studies: by extrapolating genetic correlations from a densely characterized reference panel to a sparsely typed study sample, such methods can estimate unobserved genotypes with high accuracy, thereby increasing the chances of finding true associations. To date, most genome-wide imputation analyses have used reference data from the International HapMap Project. While this strategy has been successful, association studies in the near future will also have access to additional reference information, such as control sets genotyped on multiple SNP chips and dense genome-wide haplotypes from the 1,000 Genomes Project. These new reference panels should improve the quality and scope of imputation, but they also present new methodological challenges. We describe a genotype imputation method, IMPUTE version 2, that is designed to address these challenges in next-generation association studies. We show that our method can use a reference panel containing thousands of chromosomes to attain higher accuracy than is possible with the HapMap alone, and that our approach is more accurate than competing methods on both current and next-generation datasets. We also highlight the modeling issues that arise in imputation datasets.

Paul Scheet,  Matthew Stephens (2006)
We present a statistical model for patterns of genetic variation in samples of unrelated individuals from natural populations. This model is based on the idea that, over short regions, haplotypes in a population tend to cluster into groups of similar haplotypes. To capture the fact that, because of recombination, this clustering tends to be local in nature, our model allows cluster memberships to change continuously along the chromosome according to a hidden Markov model. This approach is flexible, allowing for both "block-like" patterns of linkage disequilibrium (LD) and gradual decline in LD with distance. The resulting model is also fast and, as a result, is practicable for large data sets (e.g., thousands of individuals typed at hundreds of thousands of markers). We illustrate the utility of the model by applying it to dense single-nucleotide-polymorphism genotype data for the tasks of imputing missing genotypes and estimating haplotypic phase. For imputing missing genotypes, methods based on this model are as accurate or more accurate than existing methods. For haplotype estimation, the point estimates are slightly less accurate than those from the best existing methods (e.g., for unrelated Centre d'Etude du Polymorphisme Humain individuals from the HapMap project, switch error was 0.055 for our method vs. 0.051 for PHASE) but require a small fraction of the computational cost. In addition, we demonstrate that the model accurately reflects uncertainty in its estimates, in that probabilities computed using the model are approximately well calibrated. The methods described in this article are implemented in a software package, fastPHASE, which is available from the Stephens Lab Web site.

Rose M Albers,  Julius Gudmundsson,  John Cashy … (2007)
Prostate cancer is the most prevalent noncutaneous cancer in males in developed regions, with African American men having among the highest worldwide incidence and mortality rates. Here we report a second genetic variant in the 8q24 region that, in conjunction with another variant we recently discovered, accounts for about 11%-13% of prostate cancer cases in individuals of European descent and 31% of cases in African Americans. We made the current discovery through a genome-wide association scan of 1,453 affected Icelandic individuals and 3,064 controls using the Illumina HumanHap300 BeadChip followed by four replication studies. A key step in the discovery was the construction of a 14-SNP haplotype that efficiently tags a relatively uncommon (2%-4%) susceptibility variant in individuals of European descent that happens to be very common (approximately 42%) in African Americans. The newly identified variant shows a stronger association with affected individuals who have an earlier age at diagnosis.

Publisher ID: 08-PLGE-RA-1713R2
DOI: 10.1371/journal.pgen.1000529
PMC ID: 2689936
PubMed ID: 19543373
Copyright statement: Howie et al. This is an open-access article distributed under the terms of the Creative Commons Attribution License, which permits unrestricted use, distribution, and reproduction in any medium, provided the original author and source are credited.