Impacts of age and gender at the risk of underlying medical conditions and death in patients with avian influenza A (H7N9): a meta-analysis study 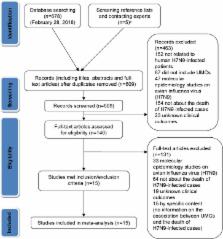 The objective of our study was to conduct a series of analyses that examined the impacts of age and gender at the risk of underlying medical conditions (UMCs) and death in patients with influenza A (H7N9).

We began by searching for potentially relevant articles in English or Chinese before February 28, 2018. Additionally, we reviewed our own files and reference lists of articles identified by this search.

Impacts of age are substantial and significant at the risk of UMCs and death in H7N9 patients. This analysis did not find a significant difference in gender comparisons. Efforts should particularly focus on reducing fatality rates in patients with combined risks from UMCs and other significant impact factor such as age (60 years or older).

Clinical findings in 111 cases of influenza A (H7N9) virus infection.

Zhan Gao,  Nan Zhong,  Qiang Fang … (2013)
During the spring of 2013, a novel avian-origin influenza A (H7N9) virus emerged and spread among humans in China. Data were lacking on the clinical characteristics of the infections caused by this virus. Using medical charts, we collected data on 111 patients with laboratory-confirmed avian-origin influenza A (H7N9) infection through May 10, 2013. Of the 111 patients we studied, 76.6% were admitted to an intensive care unit (ICU), and 27.0% died. The median age was 61 years, and 42.3% were 65 years of age or older; 31.5% were female. A total of 61.3% of the patients had at least one underlying medical condition. Fever and cough were the most common presenting symptoms. On admission, 108 patients (97.3%) had findings consistent with pneumonia. Bilateral ground-glass opacities and consolidation were the typical radiologic findings. Lymphocytopenia was observed in 88.3% of patients, and thrombocytopenia in 73.0%. Treatment with antiviral drugs was initiated in 108 patients (97.3%) at a median of 7 days after the onset of illness. The median times from the onset of illness and from the initiation of antiviral therapy to a negative viral test result on real-time reverse-transcriptase-polymerase-chain-reaction assay were 11 days (interquartile range, 9 to 16) and 6 days (interquartile range, 4 to 7), respectively. Multivariate analysis revealed that the presence of a coexisting medical condition was the only independent risk factor for the acute respiratory distress syndrome (ARDS) (odds ratio, 3.42; 95% confidence interval, 1.21 to 9.70; P=0.02). During the evaluation period, the novel H7N9 virus caused severe illness, including pneumonia and ARDS, with high rates of ICU admission and death. (Funded by the National Natural Science Foundation of China and others.).

A major role for cardiovascular burden in age-related cognitive decline.

Chengxuan Qiu,  Laura Fratiglioni (2015)
The incidence of dementia and cardiovascular disease (CVD) increases with age. Current evidence supports the role for both atherosclerosis and arteriosclerosis as a common pathophysiological ground for the heart-brain connection in ageing. Cognitive decline and CVDs share many vascular risk factors (VRFs) such as smoking, hypertension, and diabetes mellitus; furthermore, CVDs can contribute to cognitive decline by causing cerebral hypoperfusion, hypoxia, emboli, or infarcts. Mixed dementia, resulting from both cerebrovascular lesions and neurodegeneration, accounts for the majority of dementia cases among very old individuals (≥75 years). An accumulation of multiple VRFs, especially in middle age (40-59 years of age), can substantially increase dementia risk. The suggested declining trend in dementia risk, occurring in parallel with the decreasing incidence of cardiovascular events in high-income countries, supports the role of cardiovascular burden in dementia. Accordingly, strategies to promote cardiovascular health, especially if implemented from early life, might help to delay the onset of dementia. In this Review, we discuss the literature investigating the association of cardiovascular burden with cognitive decline and dementia over the life-course.