Neurological and neuropsychiatric complications of COVID-19 in 153 patients: a UK-wide surveillance study 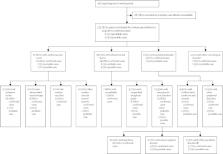 Concerns regarding potential neurological complications of COVID-19 are being increasingly reported, primarily in small series. Larger studies have been limited by both geography and specialty. Comprehensive characterisation of clinical syndromes is crucial to allow rational selection and evaluation of potential therapies. The aim of this study was to investigate the breadth of complications of COVID-19 across the UK that affected the brain.

During the exponential phase of the pandemic, we developed an online network of secure rapid-response case report notification portals across the spectrum of major UK neuroscience bodies, comprising the Association of British Neurologists (ABN), the British Association of Stroke Physicians (BASP), and the Royal College of Psychiatrists (RCPsych), and representing neurology, stroke, psychiatry, and intensive care. Broad clinical syndromes associated with COVID-19 were classified as a cerebrovascular event (defined as an acute ischaemic, haemorrhagic, or thrombotic vascular event involving the brain parenchyma or subarachnoid space), altered mental status (defined as an acute alteration in personality, behaviour, cognition, or consciousness), peripheral neurology (defined as involving nerve roots, peripheral nerves, neuromuscular junction, or muscle), or other (with free text boxes for those not meeting these syndromic presentations). Physicians were encouraged to report cases prospectively and we permitted recent cases to be notified retrospectively when assigned a confirmed date of admission or initial clinical assessment, allowing identification of cases that occurred before notification portals were available. Data collected were compared with the geographical, demographic, and temporal presentation of overall cases of COVID-19 as reported by UK Government public health bodies.

The ABN portal was launched on April 2, 2020, the BASP portal on April 3, 2020, and the RCPsych portal on April 21, 2020. Data lock for this report was on April 26, 2020. During this period, the platforms received notification of 153 unique cases that met the clinical case definitions by clinicians in the UK, with an exponential growth in reported cases that was similar to overall COVID-19 data from UK Government public health bodies. Median patient age was 71 years (range 23–94; IQR 58–79). Complete clinical datasets were available for 125 (82%) of 153 patients. 77 (62%) of 125 patients presented with a cerebrovascular event, of whom 57 (74%) had an ischaemic stroke, nine (12%) an intracerebral haemorrhage, and one (1%) CNS vasculitis. 39 (31%) of 125 patients presented with altered mental status, comprising nine (23%) patients with unspecified encephalopathy and seven (18%) patients with encephalitis. The remaining 23 (59%) patients with altered mental status fulfilled the clinical case definitions for psychiatric diagnoses as classified by the notifying psychiatrist or neuropsychiatrist, and 21 (92%) of these were new diagnoses. Ten (43%) of 23 patients with neuropsychiatric disorders had new-onset psychosis, six (26%) had a neurocognitive (dementia-like) syndrome, and four (17%) had an affective disorder. 18 (49%) of 37 patients with altered mental status were younger than 60 years and 19 (51%) were older than 60 years, whereas 13 (18%) of 74 patients with cerebrovascular events were younger than 60 years versus 61 (82%) patients older than 60 years.

To our knowledge, this is the first nationwide, cross-specialty surveillance study of acute neurological and psychiatric complications of COVID-19. Altered mental status was the second most common presentation, comprising encephalopathy or encephalitis and primary psychiatric diagnoses, often occurring in younger patients. This study provides valuable and timely data that are urgently needed by clinicians, researchers, and funders to inform immediate steps in COVID-19 neuroscience research and health policy.

Ling Mao,  Huijuan Jin,  Mengdie Wang … (2020)
The outbreak of coronavirus disease 2019 (COVID-19) in Wuhan, China, is serious and has the potential to become an epidemic worldwide. Several studies have described typical clinical manifestations including fever, cough, diarrhea, and fatigue. However, to our knowledge, it has not been reported that patients with COVID-19 had any neurologic manifestations.

Zsuzsanna Varga,  Andreas J. Flammer,  Peter Steiger … (2020)
Cardiovascular complications are rapidly emerging as a key threat in coronavirus disease 2019 (COVID-19) in addition to respiratory disease. The mechanisms underlying the disproportionate effect of severe acute respiratory syndrome coronavirus 2 (SARS-CoV-2) infection on patients with cardiovascular comorbidities, however, remain incompletely understood.1, 2 SARS-CoV-2 infects the host using the angiotensin converting enzyme 2 (ACE2) receptor, which is expressed in several organs, including the lung, heart, kidney, and intestine. ACE2 receptors are also expressed by endothelial cells. 3 Whether vascular derangements in COVID-19 are due to endothelial cell involvement by the virus is currently unknown. Intriguingly, SARS-CoV-2 can directly infect engineered human blood vessel organoids in vitro. 4 Here we demonstrate endothelial cell involvement across vascular beds of different organs in a series of patients with COVID-19 (further case details are provided in the appendix). Patient 1 was a male renal transplant recipient, aged 71 years, with coronary artery disease and arterial hypertension. The patient's condition deteriorated following COVID-19 diagnosis, and he required mechanical ventilation. Multisystem organ failure occurred, and the patient died on day 8. Post-mortem analysis of the transplanted kidney by electron microscopy revealed viral inclusion structures in endothelial cells (figure A, B ). In histological analyses, we found an accumulation of inflammatory cells associated with endothelium, as well as apoptotic bodies, in the heart, the small bowel (figure C) and lung (figure D). An accumulation of mononuclear cells was found in the lung, and most small lung vessels appeared congested. Figure Pathology of endothelial cell dysfunction in COVID-19 (A, B) Electron microscopy of kidney tissue shows viral inclusion bodies in a peritubular space and viral particles in endothelial cells of the glomerular capillary loops. Aggregates of viral particles (arrow) appear with dense circular surface and lucid centre. The asterisk in panel B marks peritubular space consistent with capillary containing viral particles. The inset in panel B shows the glomerular basement membrane with endothelial cell and a viral particle (arrow; about 150 nm in diameter). (C) Small bowel resection specimen of patient 3, stained with haematoxylin and eosin. Arrows point to dominant mononuclear cell infiltrates within the intima along the lumen of many vessels. The inset of panel C shows an immunohistochemical staining of caspase 3 in small bowel specimens from serial section of tissue described in panel D. Staining patterns were consistent with apoptosis of endothelial cells and mononuclear cells observed in the haematoxylin-eosin-stained sections, indicating that apoptosis is induced in a substantial proportion of these cells. (D) Post-mortem lung specimen stained with haematoxylin and eosin showed thickened lung septa, including a large arterial vessel with mononuclear and neutrophilic infiltration (arrow in upper inset). The lower inset shows an immunohistochemical staining of caspase 3 on the same lung specimen; these staining patterns were consistent with apoptosis of endothelial cells and mononuclear cells observed in the haematoxylin-eosin-stained sections. COVID-19=coronavirus disease 2019. Patient 2 was a woman, aged 58 years, with diabetes, arterial hypertension, and obesity. She developed progressive respiratory failure due to COVID-19 and subsequently developed multi-organ failure and needed renal replacement therapy. On day 16, mesenteric ischaemia prompted removal of necrotic small intestine. Circulatory failure occurred in the setting of right heart failure consequent to an ST-segment elevation myocardial infarction, and cardiac arrest resulted in death. Post-mortem histology revealed lymphocytic endotheliitis in lung, heart, kidney, and liver as well as liver cell necrosis. We found histological evidence of myocardial infarction but no sign of lymphocytic myocarditis. Histology of the small intestine showed endotheliitis (endothelialitis) of the submucosal vessels. Patient 3 was a man, aged 69 years, with hypertension who developed respiratory failure as a result of COVID-19 and required mechanical ventilation. Echocardiography showed reduced left ventricular ejection fraction. Circulatory collapse ensued with mesenteric ischaemia, and small intestine resection was performed, but the patient survived. Histology of the small intestine resection revealed prominent endotheliitis of the submucosal vessels and apoptotic bodies (figure C). We found evidence of direct viral infection of the endothelial cell and diffuse endothelial inflammation. Although the virus uses ACE2 receptor expressed by pneumocytes in the epithelial alveolar lining to infect the host, thereby causing lung injury, the ACE2 receptor is also widely expressed on endothelial cells, which traverse multiple organs. 3 Recruitment of immune cells, either by direct viral infection of the endothelium or immune-mediated, can result in widespread endothelial dysfunction associated with apoptosis (figure D). The vascular endothelium is an active paracrine, endocrine, and autocrine organ that is indispensable for the regulation of vascular tone and the maintenance of vascular homoeostasis. 5 Endothelial dysfunction is a principal determinant of microvascular dysfunction by shifting the vascular equilibrium towards more vasoconstriction with subsequent organ ischaemia, inflammation with associated tissue oedema, and a pro-coagulant state. 6 Our findings show the presence of viral elements within endothelial cells and an accumulation of inflammatory cells, with evidence of endothelial and inflammatory cell death. These findings suggest that SARS-CoV-2 infection facilitates the induction of endotheliitis in several organs as a direct consequence of viral involvement (as noted with presence of viral bodies) and of the host inflammatory response. In addition, induction of apoptosis and pyroptosis might have an important role in endothelial cell injury in patients with COVID-19. COVID-19-endotheliitis could explain the systemic impaired microcirculatory function in different vascular beds and their clinical sequelae in patients with COVID-19. This hypothesis provides a rationale for therapies to stabilise the endothelium while tackling viral replication, particularly with anti-inflammatory anti-cytokine drugs, ACE inhibitors, and statins.7, 8, 9, 10, 11 This strategy could be particularly relevant for vulnerable patients with pre-existing endothelial dysfunction, which is associated with male sex, smoking, hypertension, diabetes, obesity, and established cardiovascular disease, all of which are associated with adverse outcomes in COVID-19.

Coagulopathy and Antiphospholipid Antibodies in Patients with Covid-19

Yan Yan Zhang,  Meng Xiao,  Shulan Zhang … (2020)
Coagulopathy in Critical Illness with Covid-19 The authors describe a 69-year-old man with Covid-19 diagnosed in January 2020 in Wuhan, China, along with two other critically ill patients with Covid-19 who were also seen in the same intensive care unit. Coagulopathy and antiphospholipid antibodies were seen in all three patients.

Members are listed in the appendix