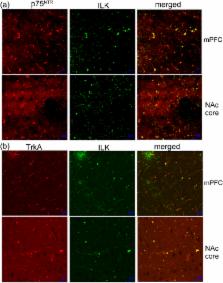 Previous studies have demonstrated that cocaine-induced behavioral sensitization is associated with persistent functional and structural alterations in the medial prefrontal cortex (mPFC) and nucleus accumbens (NAc); however, the molecular mechanisms underlying these changes have not been elucidated. In this study, the behavioral sensitization to cocaine was established in Sprague Dawley rats and was measured by locomotion and behavioral rating. The brain tissue homogenization was used for measuring the level of brain-derived neurotrophic factor (BDNF), the expression and activity of integrin-linked kinase (ILK), level of protein kinase B (Akt) phosphorylation at serine 473 and threonine 308, and the expression of p75 NTR, TrkA, and TrkB protein. The Results showed that cocaine sensitization was associated with increased BDNF, ILK activity, phospho-Akt Ser 473, p75 NTR, and TrkB protein levels in the mPFC and NAc core. The combination of pergolide and ondansetron normalized not only behavioral sensitization, but also the increases in these molecular markers. Dual immunofluoresence staining showed that ILK expression is co-distributed with p75 NTR and TrkA expression in both the mPFC and NAc core. Results suggested that the BDNF-TrkA/p75 NTR-ILK-Akt signaling pathway may be active in cocaine sensitization and associated neural plasticity in the mPFC and NAc core.

Kiyofumi Yamada,  Toshitaka Nabeshima (2003)
Activity-dependent changes in synaptic strength are considered mechanisms underlying learning and memory. Brain-derived neurotrophic factor (BDNF) plays an important role in activity-dependent synaptic plasticity such as long-term potentiation. Recent experimental evidence supports the role of BDNF in memory processes: Memory acquisition and consolidation are associated with an increase in BDNF mRNA expression and the activation of its receptor TrkB. Genetic as well as pharmacologic deprivation of BDNF or TrkB impairs learning and memory. In a positively motivated radial arm maze test, activation of the TrkB/phosphatidylinositol-3 kinase (PI3-K) signaling pathway in the hippocampus is associated with consolidation of spatial memory through an activation of translational processes. In a negatively motivated passive avoidance test, mitogen-activated protein kinase (MAPK) is activated during acquisition of fear memory. Furthermore, recent findings suggest the importance of interaction between BDNF/TrkB signaling and NMDA receptors for spatial memory. A Src-family tyrosine kinase, Fyn plays a role in this interaction by linking TrkB with NR2B. These findings suggest that BDNF/TrkB signaling in the hippocampus plays a crucial role in learning and memory.

Small-molecule modulation of neurotrophin receptors: a strategy for the treatment of neurological disease.

Stephen Massa,  F. Longo (2013)
Neurotrophins and their receptors modulate multiple signalling pathways to regulate neuronal survival and to maintain axonal and dendritic networks and synaptic plasticity. Neurotrophins have potential for the treatment of neurological diseases. However, their therapeutic application has been limited owing to their poor plasma stability, restricted nervous system penetration and, importantly, the pleiotropic actions that derive from their concomitant binding to multiple receptors. One strategy to overcome these limitations is to target individual neurotrophin receptors — such as tropomyosin receptor kinase A (TRKA), TRKB, TRKC, the p75 neurotrophin receptor or sortilin — with small-molecule ligands. Such small molecules might also modulate various aspects of these signalling pathways in ways that are distinct from the programmes triggered by native neurotrophins. By departing from conventional neurotrophin signalling, these ligands might provide novel therapeutic options for a broad range of neurological indications.

Time-dependent increases in brain-derived neurotrophic factor protein levels within the mesolimbic dopamine system after withdrawal from cocaine: implications for incubation of cocaine craving.

Ping Su,  Lin Lu,  Bruce T. Hope … (2003)
Using a rat model of drug craving, we found that the responsiveness to cocaine cues progressively increases or incubates over the first 60 d of cocaine withdrawal. Here we studied whether alterations in brain-derived neurotrophic factor (BDNF) protein levels within the mesolimbic dopamine system are associated with this incubation phenomenon. BDNF is involved in synaptic plasticity and was found to enhance responding for cues associated with natural rewards. Rats were trained to press a lever to receive intravenous cocaine or oral sucrose for 6 hr/d for 10 d; each earned reward was paired with a tone-light cue. Resumption of lever-pressing behavior was then assessed on days 1, 30, or 90 of reward withdrawal. First, resistance to extinction was assessed during 6 hr in which lever presses were not reinforced and the cue was absent. Second, cue-induced reinstatement was assessed after extinction during 1 hr in which responding led to cue presentations. Other rats were killed without testing on days 1, 30, and 90 of reward withdrawal, and BDNF and nerve growth factor (NGF) protein levels were measured in the ventral tegmental area (VTA), accumbens, and amygdala. Lever pressing during extinction and cue-induced reinstatement tests of cocaine craving progressively increased after cocaine withdrawal. Time-dependent changes also were observed during the tests for sucrose craving, with maximal responding on day 30. BDNF, but not NGF, levels in the VTA, accumbens, and amygdala progressively increased after cocaine, but not sucrose, withdrawal. Time-dependent increases in BDNF levels may lead to synaptic modifications that underlie enhanced responsiveness to cocaine cues after prolonged withdrawal periods.