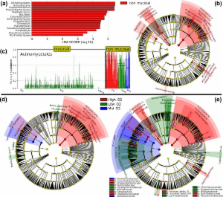 This study describes and validates a new method for metagenomic biomarker discovery by way of class comparison, tests of biological consistency and effect size estimation. This addresses the challenge of finding organisms, genes, or pathways that consistently explain the differences between two or more microbial communities, which is a central problem to the study of metagenomics. We extensively validate our method on several microbiomes and a convenient online interface for the method is provided at http://huttenhower.sph.harvard.edu/lefse/.

Damien Weber,  Martin Hall,  Lisa A. Lesniewski … (2009)
mothur aims to be a comprehensive software package that allows users to use a single piece of software to analyze community sequence data. It builds upon previous tools to provide a flexible and powerful software package for analyzing sequencing data. As a case study, we used mothur to trim, screen, and align sequences; calculate distances; assign sequences to operational taxonomic units; and describe the alpha and beta diversity of eight marine samples previously characterized by pyrosequencing of 16S rRNA gene fragments. This analysis of more than 222,000 sequences was completed in less than 2 h with a laptop computer.

George Garrity,  Qiong Wang,  James Cole … (2007)
The Ribosomal Database Project (RDP) Classifier, a naïve Bayesian classifier, can rapidly and accurately classify bacterial 16S rRNA sequences into the new higher-order taxonomy proposed in Bergey's Taxonomic Outline of the Prokaryotes (2nd ed., release 5.0, Springer-Verlag, New York, NY, 2004). It provides taxonomic assignments from domain to genus, with confidence estimates for each assignment. The majority of classifications (98%) were of high estimated confidence (> or = 95%) and high accuracy (98%). In addition to being tested with the corpus of 5,014 type strain sequences from Bergey's outline, the RDP Classifier was tested with a corpus of 23,095 rRNA sequences as assigned by the NCBI into their alternative higher-order taxonomy. The results from leave-one-out testing on both corpora show that the overall accuracies at all levels of confidence for near-full-length and 400-base segments were 89% or above down to the genus level, and the majority of the classification errors appear to be due to anomalies in the current taxonomies. For shorter rRNA segments, such as those that might be generated by pyrosequencing, the error rate varied greatly over the length of the 16S rRNA gene, with segments around the V2 and V4 variable regions giving the lowest error rates. The RDP Classifier is suitable both for the analysis of single rRNA sequences and for the analysis of libraries of thousands of sequences. Another related tool, RDP Library Compare, was developed to facilitate microbial-community comparison based on 16S rRNA gene sequence libraries. It combines the RDP Classifier with a statistical test to flag taxa differentially represented between samples. The RDP Classifier and RDP Library Compare are available online at http://rdp.cme.msu.edu/.

Gordon K. Smyth (2004)
The problem of identifying differentially expressed genes in designed microarray experiments is considered. Lonnstedt and Speed (2002) derived an expression for the posterior odds of differential expression in a replicated two-color experiment using a simple hierarchical parametric model. The purpose of this paper is to develop the hierarchical model of Lonnstedt and Speed (2002) into a practical approach for general microarray experiments with arbitrary numbers of treatments and RNA samples. The model is reset in the context of general linear models with arbitrary coefficients and contrasts of interest. The approach applies equally well to both single channel and two color microarray experiments. Consistent, closed form estimators are derived for the hyperparameters in the model. The estimators proposed have robust behavior even for small numbers of arrays and allow for incomplete data arising from spot filtering or spot quality weights. The posterior odds statistic is reformulated in terms of a moderated t-statistic in which posterior residual standard deviations are used in place of ordinary standard deviations. The empirical Bayes approach is equivalent to shrinkage of the estimated sample variances towards a pooled estimate, resulting in far more stable inference when the number of arrays is small. The use of moderated t-statistics has the advantage over the posterior odds that the number of hyperparameters which need to estimated is reduced; in particular, knowledge of the non-null prior for the fold changes are not required. The moderated t-statistic is shown to follow a t-distribution with augmented degrees of freedom. The moderated t inferential approach extends to accommodate tests of composite null hypotheses through the use of moderated F-statistics. The performance of the methods is demonstrated in a simulation study. Results are presented for two publicly available data sets.