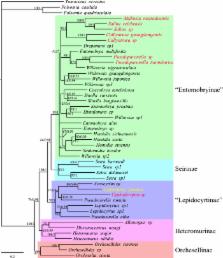 The jumping organ (furcula) is the most characteristic structure among collembolans, and it is of great taxonomical values at higher levels. The largest superfamily Entomobryoidea is traditionally classified into four families only by the morphology of the furcula. Actually, many taxa among these families are strikingly similar in morphology without considering furcula. The phylogeny of Entomobryoidea was reconstructed here based on mitochondrial and ribosomal fragments. This indicated that both Paronellidae and Cyphoderidae were ingroups within Entomobryidae with the former polyphyletic. Topology tests, which used the likelihood and Bayesian approaches, also rejected the traditional hypotheses relying on furcula morphology. Further ancestral state reconstructions have revealed that traditional taxonomical characters, i.e., furcula and body scales, had multiple independent origins in Entomobryoidea whereas tergal specialized chaetae (S-chaetae) exhibited strong phylogenetic signals. By integrating both molecular and morphological evidence, the results of this study drastically undermine the present classification of Entomobryoidea. Tergal S-chaetotaxic pattern in combination with other characters are more reasonable in taxonomy at suprageneric levels than convergent furcula. This study provides new insights of the jumping organ, which could be adaptively modified during evolution of Collembola.

Philippe Lemey,  Alexander V. Alekseyenko,  Guy Baele … (2012)
Recent developments in marginal likelihood estimation for model selection in the field of Bayesian phylogenetics and molecular evolution have emphasized the poor performance of the harmonic mean estimator (HME). Although these studies have shown the merits of new approaches applied to standard normally distributed examples and small real-world data sets, not much is currently known concerning the performance and computational issues of these methods when fitting complex evolutionary and population genetic models to empirical real-world data sets. Further, these approaches have not yet seen widespread application in the field due to the lack of implementations of these computationally demanding techniques in commonly used phylogenetic packages. We here investigate the performance of some of these new marginal likelihood estimators, specifically, path sampling (PS) and stepping-stone (SS) sampling for comparing models of demographic change and relaxed molecular clocks, using synthetic data and real-world examples for which unexpected inferences were made using the HME. Given the drastically increased computational demands of PS and SS sampling, we also investigate a posterior simulation-based analogue of Akaike's information criterion (AIC) through Markov chain Monte Carlo (MCMC), a model comparison approach that shares with the HME the appealing feature of having a low computational overhead over the original MCMC analysis. We confirm that the HME systematically overestimates the marginal likelihood and fails to yield reliable model classification and show that the AICM performs better and may be a useful initial evaluation of model choice but that it is also, to a lesser degree, unreliable. We show that PS and SS sampling substantially outperform these estimators and adjust the conclusions made concerning previous analyses for the three real-world data sets that we reanalyzed. The methods used in this article are now available in BEAST, a powerful user-friendly software package to perform Bayesian evolutionary analyses.

Janet S. Sinsheimer,  Maximilian E R Weiss,  J Sinsheimer … (2001)
We develop a reversible jump Markov chain Monte Carlo approach to estimating the posterior distribution of phylogenies based on aligned DNA/RNA sequences under several hierarchical evolutionary models. Using a proper, yet nontruncated and uninformative prior, we demonstrate the advantages of the Bayesian approach to hypothesis testing and estimation in phylogenetics by comparing different models for the infinitesimal rates of change among nucleotides, for the number of rate classes, and for the relationships among branch lengths. We compare the relative probabilities of these models and the appropriateness of a molecular clock using Bayes factors. Our most general model, first proposed by Tamura and Nei, parameterizes the infinitesimal change probabilities among nucleotides (A, G, C, T/U) into six parameters, consisting of three parameters for the nucleotide stationary distribution, two rate parameters for nucleotide transitions, and another parameter for nucleotide transversions. Nested models include the Hasegawa, Kishino, and Yano model with equal transition rates and the Kimura model with a uniform stationary distribution and equal transition rates. To illustrate our methods, we examine simulated data, 16S rRNA sequences from 15 contemporary eubacteria, halobacteria, eocytes, and eukaryotes, 9 primates, and the entire HIV genome of 11 isolates. We find that the Kimura model is too restrictive, that the Hasegawa, Kishino, and Yano model can be rejected for some data sets, that there is evidence for more than one rate class and a molecular clock among similar taxa, and that a molecular clock can be rejected for more distantly related taxa.

Andrew Meade,  Mark D. Pagel (2006)
We describe a Bayesian method for investigating correlated evolution of discrete binary traits on phylogenetic trees. The method fits a continuous-time Markov model to a pair of traits, seeking the best fitting models that describe their joint evolution on a phylogeny. We employ the methodology of reversible-jump (RJ) Markov chain Monte Carlo to search among the large number of possible models, some of which conform to independent evolution of the two traits, others to correlated evolution. The RJ Markov chain visits these models in proportion to their posterior probabilities, thereby directly estimating the support for the hypothesis of correlated evolution. In addition, the RJ Markov chain simultaneously estimates the posterior distributions of the rate parameters of the model of trait evolution. These posterior distributions can be used to test among alternative evolutionary scenarios to explain the observed data. All results are integrated over a sample of phylogenetic trees to account for phylogenetic uncertainty. We implement the method in a program called RJ Discrete and illustrate it by analyzing the question of whether mating system and advertisement of estrus by females have coevolved in the Old World monkeys and great apes.