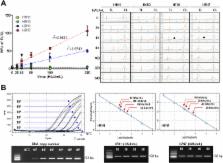 The development of a sensitive and rapid diagnostic test is needed for early detection of avian influenza (AI) H7 subtype. In this study, novel monoclonal antibodies (mAbs) against influenza A H7N9 recombinant hemagglutinin (rHA)1 were developed and applied to a Europium nanoparticle–based rapid fluorescent immunochromatographic strip test (FICT) to improve the sensitivity of the rapid diagnostic system. Two antibodies (2F4 and 6D7) exhibited H7 subtype specificity in a dot-FICT assay by optimization of the conjugate and the pH of the lysis buffer. The subtype specificity was confirmed by an immunofluorescence assay and Western blot analysis. The limit of detection of the FICT employing novel mAbs 31 ng/mL for H7N9 rHA1 and 40 hemagglutination units/mL for H7 subtype virus. Sensitivity was improved 25-fold using Europium as confirmed by comparison of colloidal gold-based rapid diagnostic kit using the 2F4 and 6D7 mAbs.

Development of a real-time reverse transcriptase PCR assay for type A influenza virus and the avian H5 and H7 hemagglutinin subtypes.

Leslie Bulaga,  Katherine L. Perdue,  Kenton Lohman … (2002)
A real-time reverse transcriptase PCR (RRT-PCR) assay based on the avian influenza virus matrix gene was developed for the rapid detection of type A influenza virus. Additionally, H5 and H7 hemagglutinin subtype-specific probe sets were developed based on North American avian influenza virus sequences. The RRT-PCR assay utilizes a one-step RT-PCR protocol and fluorogenic hydrolysis type probes. The matrix gene RRT-PCR assay has a detection limit of 10 fg or approximately 1,000 copies of target RNA and can detect 0.1 50% egg infective dose of virus. The H5- and H7-specific probe sets each have a detection limit of 100 fg of target RNA or approximately 10(3) to 10(4) gene copies. The sensitivity and specificity of the real-time PCR assay were directly compared with those of the current standard for detection of influenza virus: virus isolation (VI) in embryonated chicken eggs and hemagglutinin subtyping by hemagglutination inhibition (HI) assay. The comparison was performed with 1,550 tracheal and cloacal swabs from various avian species and environmental swabs obtained from live-bird markets in New York and New Jersey. Influenza virus-specific RRT-PCR results correlated with VI results for 89% of the samples. The remaining samples were positive with only one detection method. Overall the sensitivity and specificity of the H7- and H5-specific RRT-PCR were similar to those of VI and HI.

Peter M. Schneeberger,  Thijs Kuiken,  Arnold Bosman … (2004)
Highly pathogenic avian influenza A viruses of subtypes H5 and H7 are the causative agents of fowl plague in poultry. Influenza A viruses of subtype H5N1 also caused severe respiratory disease in humans in Hong Kong in 1997 and 2003, including at least seven fatal cases, posing a serious human pandemic threat. Between the end of February and the end of May 2003, a fowl plague outbreak occurred in The Netherlands. A highly pathogenic avian influenza A virus of subtype H7N7, closely related to low pathogenic virus isolates obtained from wild ducks, was isolated from chickens. The same virus was detected subsequently in 86 humans who handled affected poultry and in three of their family members. Of these 89 patients, 78 presented with conjunctivitis, 5 presented with conjunctivitis and influenza-like illness, 2 presented with influenza-like illness, and 4 did not fit the case definitions. Influenza-like illnesses were generally mild, but a fatal case of pneumonia in combination with acute respiratory distress syndrome occurred also. Most virus isolates obtained from humans, including probable secondary cases, had not accumulated significant mutations. However, the virus isolated from the fatal case displayed 14 amino acid substitutions, some of which may be associated with enhanced disease in this case. Because H7N7 viruses have caused disease in mammals, including horses, seals, and humans, on several occasions in the past, they may be unusual in their zoonotic potential and, thus, form a pandemic threat to humans.

Limit of blank, limit of detection and limit of quantitation.

Terry Pry,  D Armbruster (2008)
* Limit of Blank (LoB), Limit of Detection (LoD), and Limit of Quantitation (LoQ) are terms used to describe the smallest concentration of a measurand that can be reliably measured by an analytical procedure. * LoB is the highest apparent analyte concentration expected to be found when replicates of a blank sample containing no analyte are tested. LoB = mean(blank) + 1.645(SD(blank)). * LoD is the lowest analyte concentration likely to be reliably distinguished from the LoB and at which detection is feasible. LoD is determined by utilising both the measured LoB and test replicates of a sample known to contain a low concentration of analyte. * LoD = LoB + 1.645(SD (low concentration sample)). * LoQ is the lowest concentration at which the analyte can not only be reliably detected but at which some predefined goals for bias and imprecision are met. The LoQ may be equivalent to the LoD or it could be at a much higher concentration.