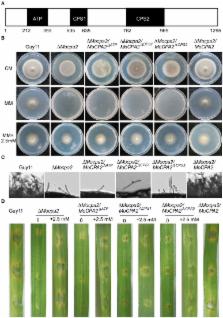 Arginine is a semi-essential amino acid that affects physiological and biochemical functions. The CPA2 gene in yeast encodes a large subunit of arginine-specific carbamoyl phosphate synthetase (CPS) and is involved in arginine biosynthesis. Here, an ortholog of yeast CPA2 was identified in the rice blast fungus Magnaporthe oryzae, and was named MoCPA2. MoCpa2 is an 1180-amino acid protein which contains an ATP grasp domain and two CPSase domains. Targeted deletion of MoCPA2 supported its role in de novo arginine biosynthesis in M. oryzae as mutant phenotypes were complemented by arginine but not ornithine. The Δ Mocpa2 mutant exhibited defects in asexual development and pathogenicity but not appressorium formation. Further examination revealed that the invasive hyphae of the Δ Mocpa2 mutant were restricted mainly to the primary infected cells. In addition, the Δ Mocpa2 mutant was unable to induce a plant defense response and had the ability to scavenge ROS during pathogen-plant interactions. Structure analysis revealed that the ATP grasp domain and each CPS domain were indispensable for the proper localization and full function of MoCpa2. In summary, our results indicate that MoCpa2 plays an important role in arginine biosynthesis, and affects growth, conidiogenesis, and pathogenicity. These results suggest that research into metabolism and processes that mediate amino acid synthesis are valuable for understanding M. oryzae pathogenesis.

Alex Levine,  Raimund Tenhaken,  Richard D.S. Dixon … (1994)
Microbial elicitors or attempted infection with an avirulent pathogen strain causes the rapid production of reactive oxygen intermediates. We report here that H2O2 from this oxidative burst not only drives the cross-linking of cell wall structural proteins, but also functions as a local trigger of programmed death in challenged cells and as a diffusible signal for the induction in adjacent cells of genes encoding cellular protectants such as glutathione S-transferase and glutathione peroxidase. Thus, H2O2 from the oxidative burst plays a key role in the orchestration of a localized hypersensitive response during the expression of plant disease resistance.

Identification and characterization of MPG1, a gene involved in pathogenicity from the rice blast fungus Magnaporthe grisea.

E Hamer,  Inez Hamer,  Daniel J. Ebbole … (1993)
Differential cDNA cloning was used to identify genes expressed during infectious growth of the fungal pathogen Magnaporthe grisea in its host, the rice plant. We characterized one of these genes, MPG1, in detail. Using a novel assay to determine the proportion of fungal biomass present in the plant, we determined that the MPG1 transcript was 60-fold more abundant during growth in the plant than in culture. Mpg1 mutants have a reduced ability to cause disease symptoms that appears to result from an impaired ability to undergo appressorium formation. MPG1 mRNA was highly abundant very early in plant infection concomitant with appressorium formation and was also abundant at the time of symptom development. The MPG1 mRNA was also expressed during conidiation and in mycelial cultures starved for nitrogen or carbon. MPG1 potentially encodes a small, secreted, cysteine-rich, moderately hydrophobic protein with the characteristics of a fungal hydrophobin. Consistent with the role of the MPG1 gene product as a hydrophobin, Mpg1 mutants show an "easily wettable" phenotype. Our results suggest that hydrophobins may have a role in the elaboration of infective structures by fungi and may fulfill other functions in fungal phytopathogenesis.

Christina Bradley,  Ned J C Lamb,  P Kjellbom (1992)
Treatment of bean or soybean cells with fungal elicitor or glutathione causes a rapid insolubilization of preexisting (hydroxy)proline-rich structural proteins in the cell wall. This insolubilization, which involves H2O2-mediated oxidative cross-linking, is initiated within 2 min and is complete within 10 min under optimal conditions, and hence, precedes the expression of transcription-dependent defenses. Cross-linking is also under developmental control during hypocotyl growth and in tissues subject to mechanical stress such as the stem-petiole junction. Stimulus-dependent oxidative cross-linking of wall structural proteins is a novel site of cellular regulation with potentially important functions in cell maturation and toughening of cell walls in the initial stages of plant defense.

This article was submitted to Plant Biotic Interactions, a section of the journal Frontiers in Microbiology