Pattern glare: the effects of contrast and color 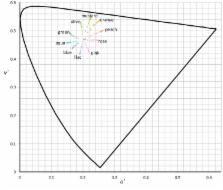 Aim: To test a theory of visual stress by investigating the inter-relationships between (1) the threshold contrast/saturation at which individuals first report discomfort when viewing colored gratings of progressively increasing contrast and decreasing saturation; (2) the choice of a colored overlay for reading; (3) any increase in reading speed when the overlay is used.

Method: Ninety-five young adults, with normal color vision, reported illusions from square-wave gratings (Pattern Glare Test), chose any colored overlays that improved clarity (Intuitive Color Overlays) and read aloud randomly ordered common words (Wilkins Rate of Reading Test). This was followed by an automated choice of tints for text using various screen colors on a tablet, and a test of discomfort from patterns of progressively increasing contrast and decreasing saturation, using software developed for this study. All participants wore their optimal refractive correction throughout the procedure.

Results: Fifty-eight participants chose a colored overlay and reported that it made text easier and more comfortable to read. On average, these individuals had a greater improvement in reading speed with their overlays ( p = 0.003), a lower contrast threshold at which discomfort from achromatic gratings was first reported ( p = 0.015), and a tendency to report more pattern glare ( p = 0.052), compared to the other participants. Participants who chose both a most and least preferred tint for text using the automated procedure reported discomfort from colored gratings at a significantly higher contrast with their most preferred color compared to their least preferred color ( p = 0.003). The choice of a colored tint was moderately consistent across tests. The most and least preferred colors tended to be complementary.

Conclusion: Colored tints that improved reading speed reduced pattern glare both in terms of the illusion susceptibility and in terms of discomfort contrast threshold, supporting a theory of visual stress. An automated test that incorporates colored gratings and a choice of most and least preferred color might better identify individuals whose reading speed improves with colored overlays.

A neurological basis for visual discomfort.

Julia Klesney-Tait,  S. Sala,  Arnold Wilkins … (1984)
Certain patterns of stripes are judged to be unpleasant to look at. They induce illusions of colour, shape and motion that are sometimes perceived predominantly to one side of fixation. People who suffer frequent headaches tend to report more illusions, and if the pain consistently occurs on the same side of the head the illusions tend to be lateralized. The parameters of the patterns that induce illusions (including their shape, spatial frequency, duty cycle, contrast and cortical representation) closely resemble those that elicit epileptiform electroencephalographic abnormalities in patients with photosensitive epilepsy. The viewing conditions under which such abnormalities are likely to appear are also those under which more illusions are seen.

X Zong,  Arnold Wilkins,  Jie Huang … (2011)
Certain patterns can induce perceptual illusions/distortions and visual discomfort in most people, headaches in patients with migraine, and seizures in patients with photosensitive epilepsy. Visual stimuli are common triggers for migraine attacks, possibly because of a hyperexcitability of the visual cortex shown in patients with migraine. Precision ophthalmic tints (POTs) are claimed to reduce perceptual distortions and visual discomfort and to prevent migraine headaches in some patients. We report an fMRI visual cortical activation study designed to investigate neurological mechanisms for the beneficial effects of POTs in migraine. Eleven migraineurs and 11 age- and sex-matched non-headache controls participated in the study using non-stressful and stressful striped patterns viewed through gray, POT, and control coloured lenses. For all lenses, controls and migraineurs did not differ in their response to the non-stressful patterns. When the migraineurs wore gray lenses or control coloured lenses, the stressful pattern resulted in activation that was greater than in the controls. There was also an absence of the characteristic low-pass spatial frequency (SF) tuning in extrastriate visual areas. When POTs were worn, however, both cortical activation and SF tuning were normalized. Both when observing the stressful pattern and under more typical viewing conditions, the POTs reduced visual discomfort more than either of the other two lenses. The normalization of cortical activation and SF tuning in the migraineurs by POTs suggests a neurological basis for the therapeutic effect of these lenses in reducing visual cortical hyperactivation in migraine.

Warren D Marcus,  M Soso (1989)
We investigated stripe-induced visual discomfort and its relation to migraine. Some people find viewing striped patterns aversive. Prior work has suggested that migraineurs, in particular, are bothered by stripes. Subjects were selected by opportunity sampling. They were shown striped patterns and asked questions about their general health and their headache history, if any. Of the 102 subjects, 38 were diagnosed as having migraine headaches, 22 had nonmigraine headaches, and 42 were considered to be nonheadache subjects; 82% of those with migraines were stripe sensitive while only 6.2% without migraines were stripe sensitive. We conclude that stripe aversiveness is related to migraine headaches and can assist differentiation of migraine and nonmigraine headaches.