Mitochondrial ROS production correlates with, but does not directly regulate lifespan in drosophila 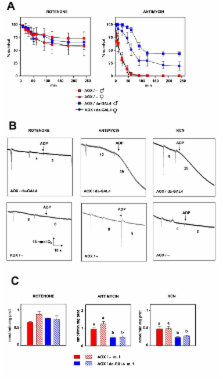 The Mitochondrial Free Radical Theory of Aging (MFRTA) is currently one of the most widely accepted theories used to explain aging. From MFRTA three basic predictions can be made: long-lived individuals or species should produce fewer mitochondrial Reactive Oxygen Species (mtROS) than short-lived individuals or species; a decrease in mtROS production will increase lifespan; and an increase in mtROS production will decrease lifespan. It is possible to add a further fourth prediction: if ROS is controlling longevity separating these parameters through selection would be impossible. These predictions have been tested in Drosophila melanogaster. Firstly, we studied levels of mtROS production and lifespan of three wild-type strains of Drosophila, Oregon R, Canton S and Dahomey. Oregon R flies live the longest and produce significantly fewer mtROS than both Canton S and Dahomey. These results are therefore in accordance with the first prediction. A new transgenic Drosophila model expressing the Ciona intestinalis Alternative Oxidase (AOX) was used to test the second prediction. In fungi and plants, AOX expression regulates both free radical production and lifespan. In Drosophila, AOX expression decreases mtROS production, but does not increase lifespan. This result contradicts the second prediction of MFRTA. The third prediction was tested in flies mutant for the gene dj-1β. These flies are characterized by an age-associated decline in locomotor function and increased levels of mtROS production. Nevertheless, dj-1β mutant flies do not display decreased lifespan, which again is in contradiction with MFRTA. In our final experiment we utilized flies with DAH mitochondrial DNA in an OR nuclear background, and OR mitochondrial DNA in DAH nuclear background. From this, Mitochondrial DNA does not control free radical production, but it does determine longevity of females independently of mtROS production. In summary, these results do not systematically support the predictions of the MFRTA. Accordingly, MFRTA should be revised to accommodate these findings.

L. Y. Jang,  F Muller,  Michael S Lustgarten … (2007)
The early observations on the rate-of-living theory by Max Rubner and the report by Gershman that oxygen free radicals exist in vivo culminated in the seminal proposal in the 1950s by Denham Harman that reactive oxygen species are a cause of aging (free radical theory of aging). The goal of this review is to analyze recent findings relevant in evaluating Harman's theory using experimental results as grouped by model organisms (i.e., invertebrate models and mice). In this regard, we have focused primarily on recent work involving genetic manipulations. Because the free radical theory of aging is not the only theorem proposed to explain the mechanism(s) involved in aging at the molecular level, we also discuss how this theory is related to other areas of research in biogerontology, specifically, telomere/cell senescence, genomic instability, and the mitochondrial hypothesis of aging. We also discuss where we think the free radical theory is headed. It is now possible to give at least a partial answer to the question whether oxidative stress determines life span as Harman posed so long ago. Based on studies to date, we argue that a tentative case for oxidative stress as a life-span determinant can be made in Drosophila melanogaster. Studies in mice argue for a role of oxidative stress in age-related disease, especially cancer; however, with regard to aging per se, the data either do not support or remain inconclusive on whether oxidative stress determines life span.

Against the oxidative damage theory of aging: superoxide dismutases protect against oxidative stress but have little or no effect on life span in Caenorhabditis elegans.

J Vanfleteren,  Celia G. Walker,  Koen Houthoofd … (2008)
The superoxide radical (O(2)(-)) has long been considered a major cause of aging. O(2)(-) in cytosolic, extracellular, and mitochondrial pools is detoxified by dedicated superoxide dismutase (SOD) isoforms. We tested the impact of each SOD isoform in Caenorhabditis elegans by manipulating its five sod genes and saw no major effects on life span. sod genes are not required for daf-2 insulin/IGF-1 receptor mutant longevity. However, loss of the extracellular Cu/ZnSOD sod-4 enhances daf-2 longevity and constitutive diapause, suggesting a signaling role for sod-4. Overall, these findings imply that O(2)(-) is not a major determinant of aging in C. elegans.

Is the oxidative stress theory of aging dead?

Viviana Pérez,  Alex Bokov,  Holly Van Remmen … (2009)
Currently, the oxidative stress (or free radical) theory of aging is the most popular explanation of how aging occurs at the molecular level. While data from studies in invertebrates (e.g., C. elegans and Drosophila) and rodents show a correlation between increased lifespan and resistance to oxidative stress (and in some cases reduced oxidative damage to macromolecules), direct evidence showing that alterations in oxidative damage/stress play a role in aging are limited to a few studies with transgenic Drosophila that overexpress antioxidant enzymes. Over the past eight years, our laboratory has conducted an exhaustive study on the effect of under- or overexpressing a large number and wide variety of genes coding for antioxidant enzymes. In this review, we present the survival data from these studies together. Because only one (the deletion of the Sod1 gene) of the 18 genetic manipulations we studied had an effect on lifespan, our data calls into serious question the hypothesis that alterations in oxidative damage/stress play a role in the longevity of mice.