The impact on health status in short- and long-terms of a novel and non-orthodox real-world COPD rehabilitation effort in rural India: an appraisal 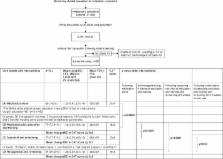 Rehabilitation has been an integral part of management of COPD. Since the implementation of the standard rehabilitation protocol is hardly possible in the rural developing world, aiming to make a feasible alternate effort may be worthwhile.

COPD patients diagnosed through spirometry were first stabilized with 6 weeks of uniform pharmacotherapy. Subsequently, they were subjected to a curriculum-based intensive single-session intervention with education, bronchial hygiene, and exercise training. The latter involved whole body exercise, pursed lip breathing, and diaphragmatic exercise. The participants continued to practice the exercises under real-world encouragement and supervision from trained volunteers. The impact was appraised in terms of change in health status through COPD assessment test (CAT) score measurements at stabilization, and after 6 weeks and 1 year of the intensive training and education.

The self-managed practice of a single-session education and training under real-world supervision can bring forth significant long-term improvement in the health status of COPD sufferers. Such simple and feasible intervention may substitute formal COPD rehabilitation programs in resource constraint situations.

Christopher Murray,  Alan Lopez (1997)
Plausible projections of future mortality and disability are a useful aid in decisions on priorities for health research, capital investment, and training. Rates and patterns of ill health are determined by factors such as socioeconomic development, educational attainment, technological developments, and their dispersion among populations, as well as exposure to hazards such as tobacco. As part of the Global Burden of Disease Study (GBD), we developed three scenarios of future mortality and disability for different age-sex groups, causes, and regions. We used the most important disease and injury trends since 1950 in nine cause-of-death clusters. Regression equations for mortality rates for each cluster by region were developed from gross domestic product per person (in international dollars), average number of years of education, time (in years, as a surrogate for technological change), and smoking intensity, which shows the cumulative effects based on data for 47 countries in 1950-90. Optimistic, pessimistic, and baseline projections of the independent variables were made. We related mortality from detailed causes to mortality from a cause cluster to project more detailed causes. Based on projected numbers of deaths by cause, years of life lived with disability (YLDs) were projected from different relation models of YLDs to years of life lost (YLLs). Population projections were prepared from World Bank projections of fertility and the projected mortality rates. Life expectancy at birth for women was projected to increase in all three scenarios; in established market economies to about 90 years by 2020. Far smaller gains in male life expectancy were projected than in females; in formerly socialist economies of Europe, male life expectancy may not increase at all. Worldwide mortality from communicable maternal, perinatal, and nutritional disorders was expected to decline in the baseline scenario from 17.2 million deaths in 1990 to 10.3 million in 2020. We projected that non-communicable disease mortality will increase from 28.1 million deaths in 1990 to 49.7 million in 2020. Deaths from injury may increase from 5.1 million to 8.4 million. Leading causes of disability-adjusted life years (DALYs) predicted by the baseline model were (in descending order): ischaemic heart disease, unipolar major depression, road-traffic accidents, cerebrovascular disease, chronic obstructive pulmonary disease, lower respiratory infections, tuberculosis, war injuries, diarrhoeal diseases, and HIV. Tobacco-attributable mortality is projected to increase from 3.0 million deaths in 1990 to 8.4 million deaths in 2020. Health trends in the next 25 years will be determined mainly by the ageing of the world's population, the decline in age-specific mortality rates from communicable, maternal, perinatal, and nutritional disorders, the spread of HIV, and the increase in tobacco-related mortality and disability. Projections, by their nature, are highly uncertain, but we found some robust results with implications for health policy.

M Avendaño,  Roger S. Goldstein,  G Guyatt … (1994)
Disability associated with chronic obstructive pulmonary disease has led to the development of rehabilitation programmes that aim to increase exercise tolerance and improve quality of life. Many reports of the benefits of rehabilitation have been from uncontrolled trials and unsupervised programmes. In view of the commitment asked of patients, their families, and health-care professionals, rehabilitation should be justified by a demonstration of sustained improvement over conventional treatment. We undertook a prospective randomised controlled trial of respiratory rehabilitation in 89 subjects (44 men, 45 women) aged 66 (SD 7) years with severe but stable chronic obstructive pulmonary disease who received rehabilitation or conventional community care. The treatment group were rehabilitated as inpatients for 8 weeks and supervised as outpatients for 16 weeks. Primary outcome measures of exercise tolerance and quality of life were made at baseline and repeated at 12, 18, and 24 weeks. The difference between baseline and last follow-up was significant for 6 min walk distance (37.9 m [95% CI 10.8-65.0], p = 0.0067) and submaximal cycle time (4.7 min [2.1-7.3]). There were also significant differences in questionnaire assessment of dyspnoea (p = 0.0061), emotional function (p = 0.0150), mastery (p = 0.0002), and dyspnoea index (p = 0.0053). Improvements in exercise tolerance and quality of life can be achieved and sustained for 6 months in patients undergoing respiratory rehabilitation compared with those receiving conventional care.