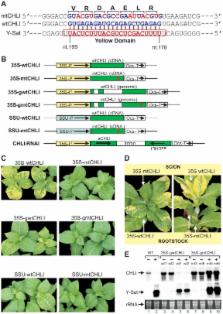 The Cucumber mosaic virus (CMV) Y-satellite RNA (Y-Sat) has a small non-protein-coding RNA genome that induces yellowing symptoms in infected Nicotiana tabacum (tobacco). How this RNA pathogen induces such symptoms has been a longstanding question. We show that the yellowing symptoms are a result of small interfering RNA (siRNA)-directed RNA silencing of the chlorophyll biosynthetic gene, CHLI. The CHLI mRNA contains a 22-nucleotide (nt) complementary sequence to the Y-Sat genome, and in Y-Sat-infected plants, CHLI expression is dramatically down-regulated. Small RNA sequencing and 5′ RACE analyses confirmed that this 22-nt sequence was targeted for mRNA cleavage by Y-Sat-derived siRNAs. Transformation of tobacco with a RNA interference (RNAi) vector targeting CHLI induced Y-Sat-like symptoms. In addition, the symptoms of Y-Sat infection can be completely prevented by transforming tobacco with a silencing-resistant variant of the CHLI gene. These results suggest that siRNA-directed silencing of CHLI is solely responsible for the Y-Sat-induced symptoms. Furthermore, we demonstrate that two Nicotiana species, which do not develop yellowing symptoms upon Y-Sat infection, contain a single nucleotide polymorphism within the siRNA-targeted CHLI sequence. This suggests that the previously observed species specificity of Y-Sat-induced symptoms is due to natural sequence variation in the CHLI gene, preventing CHLI silencing in species with a mismatch to the Y-Sat siRNA. Taken together, these findings provide the first demonstration of small RNA-mediated viral disease symptom production and offer an explanation of the species specificity of the viral disease.

Viral infections result in a variety of disease symptoms that vary in character and severity depending on the type of viral infection and individual host factors. Despite extensive research, the molecular basis of viral disease development has remained poorly understood. Both plant and animal viruses express 20–25 nucleotide siRNAs or microRNAs (miRNAs) in their host. These virus-specific small RNAs (sRNAs) direct RNA silencing of homologous viral genes to restrict virus replication forming part of the host's antiviral defense mechanism. Using a plant viral satellite RNA as a model system, we demonstrate here a new function for virus-derived sRNAs: induction of disease symptoms by silencing of a physiologically important host gene. Furthermore, we demonstrate that such viral-derived sRNA-induced disease symptoms can be prevented by the expression of a either naturally evolved, or artificially introduced, silencing-resistant sequence variant of the viral siRNA-targeted gene. These findings not only provide the first demonstration of a sRNA-mediated viral disease mechanism, but also offer an alternate strategy to prevent the onset of such viral diseases.

Phillip Zamore,  Megha Ghildiyal (2009)
Since the discovery in 1993 of the first small silencing RNA, a dizzying number of small RNA classes have been identified, including microRNAs (miRNAs), small interfering RNAs (siRNAs) and Piwi-interacting RNAs (piRNAs). These classes differ in their biogenesis, their modes of target regulation and in the biological pathways they regulate. There is a growing realization that, despite their differences, these distinct small RNA pathways are interconnected, and that small RNA pathways compete and collaborate as they regulate genes and protect the genome from external and internal threats.

A versatile binary vector system with a T-DNA organisational structure conducive to efficient integration of cloned DNA into the plant genome.

Rosalind Gleave (1992)
A versatile gene expression cartridge and binary vector system was constructed for use in Agrobacterium-mediated plant transformation. The expression cartridge of the primary cloning vector, pART7, comprises of cauliflower mosaic virus Cabb B-JI isolate 35S promoter, a multiple cloning site and the transcriptional termination region of the octopine synthase gene. The entire cartridge can be removed from pART7 as a Not I fragment and introduced directly into the binary vector, pART27, recombinants being selected by blue/white screening for beta-galactosidase. pART27 carries the RK2 minimal replicon for maintenance in Agrobacterium, the ColE1 origin of replication for high-copy maintenance in Escherichia coli and the Tn7 spectinomycin/streptomycin resistance gene as a bacterial selectable marker. The organisational structure of the T-DNA of pART27 has been constructed taking into account the right to left border, 5' to 3' model of T-DNA transfer. The T-DNA carries the chimaeric kanamycin resistance gene (nopaline synthase promoter-neomycin phosphotransferase-nopaline synthase terminator) distal to the right border relative to the lacZ' region. Utilisation of these vectors in Agrobacterium-mediated transformation of tobacco demonstrated efficient T-DNA transfer to the plant genome.

Phillip Zamore,  Benjamin Haley (2004)
The siRNA-directed ribonucleoprotein complex, RISC, catalyzes target RNA cleavage in the RNA interference pathway. Here, we show that siRNA-programmed RISC is a classical Michaelis-Menten enzyme in the presence of ATP. In the absence of ATP, the rate of multiple rounds of catalysis is limited by release of the cleaved products from the enzyme. Kinetic analysis suggests that different regions of the siRNA play distinct roles in the cycle of target recognition, cleavage, and product release. Bases near the siRNA 5' end disproportionately contribute to target RNA-binding energy, whereas base pairs formed by the central and 3' regions of the siRNA provide a helical geometry required for catalysis. Finally, the position of the scissile phosphate on the target RNA seems to be determined during RISC assembly, before the siRNA encounters its RNA target.

Publisher ID: PPATHOGENS-D-10-00505
DOI: 10.1371/journal.ppat.1002022
PMC ID: 3088724
PubMed ID: 21573142
Copyright statement: Smith et al. This is an open-access article distributed under the terms of the Creative Commons Attribution License, which permits unrestricted use, distribution, and reproduction in any medium, provided the original author and source are credited.