Epidemiology and Management of Cysticercosis and Taenia solium Taeniasis in Europe, Systematic Review 1990–2011 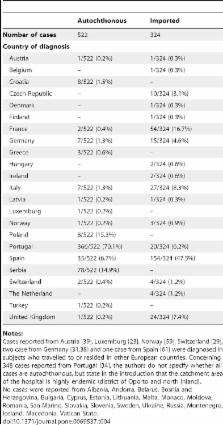 Cysticercosis is caused by the invasion of human or pig tissues by the metacestode larval stage of Taenia solium. In Europe, the disease was endemic in the past but the autochthonous natural life cycle of the parasite is currently completed very rarely. Recently, imported cases have increased in parallel to the increased number of migrations and international travels. The lack of specific surveillance systems for cysticercosis leads to underestimation of the epidemiological and clinical impacts.

To review the available data on epidemiology and management of cysticercosis in Europe.

A review of literature on human cysticercosis and T. solium taeniasis in Europe published between 1990–2011 was conducted.

Cysticercosis remains a challenge for European care providers, since they are often poorly aware of this infection and have little familiarity in managing this disease. Cysticercosis should be included among mandatory reportable diseases, in order to improve the accuracy of epidemiological information. European health care providers might benefit from a transfer of knowledge from colleagues working in endemic areas and the development of shared diagnostic and therapeutic processes would have impact on the quality of the European health systems.

V Rajshekhar,  Stimson P Schantz,  O Del Maschio … (2001)
Neurocysticercosis is the most common helminthic infection of the CNS but its diagnosis remains difficult. Clinical manifestations are nonspecific, most neuroimaging findings are not pathognomonic, and some serologic tests have low sensitivity and specificity. The authors provide diagnostic criteria for neurocysticercosis based on objective clinical, imaging, immunologic, and epidemiologic data. These include four categories of criteria stratified on the basis of their diagnostic strength, including the following: 1) absolute--histologic demonstration of the parasite from biopsy of a brain or spinal cord lesion, cystic lesions showing the scolex on CT or MRI, and direct visualization of subretinal parasites by funduscopic examination; 2) major--lesions highly suggestive of neurocysticercosis on neuroimaging studies, positive serum enzyme-linked immunoelectrotransfer blot for the detection of anticysticercal antibodies, resolution of intracranial cystic lesions after therapy with albendazole or praziquantel, and spontaneous resolution of small single enhancing lesions; 3) minor--lesions compatible with neurocysticercosis on neuroimaging studies, clinical manifestations suggestive of neurocysticercosis, positive CSF enzyme-linked immunosorbent assay for detection of anticysticercal antibodies or cysticercal antigens, and cysticercosis outside the CNS; and 4) epidemiologic--evidence of a household contact with Taenia solium infection, individuals coming from or living in an area where cysticercosis is endemic, and history of frequent travel to disease-endemic areas. Interpretation of these criteria permits two degrees of diagnostic certainty: 1) definitive diagnosis, in patients who have one absolute criterion or in those who have two major plus one minor and one epidemiologic criterion; and 2) probable diagnosis, in patients who have one major plus two minor criteria, in those who have one major plus one minor and one epidemiologic criterion, and in those who have three minor plus one epidemiologic criterion.

O Del Maschio,  ,  Marcio Garcia (2005)
Neurocysticercosis, the infection of the human brain by the larvae of Taenia solium, is a major cause of acquired epilepsy in most low-income countries. Cases of neurocysticercosis are becoming more common in high-income countries because of increased migration and travel. Diagnosis by neuroimaging and serological assessment has greatly improved over the past decade, and the natural progression of the disease and response to antiparasitic drugs is now much better understood. Neurocysticercosis is potentially eradicable, and control interventions are underway to eliminate this infection. Meanwhile, updated information on diagnosis and management of neurocysticercosis is required, especially for clinicians who are unfamiliar with its wide array of clinical presentations.

The study was carried out within the COHEMI (COordinating resources to assess and improve HEalth status of MIgrants from Latin America)-projetc. This is a three-year collaborative project supported by the European Commission under the Health Cooperation Work Programme of the 7th FRAMEWORK PROGRAMME (GA-261495) launched in 2011 ( http://www.cohemi-project.eu/). Héctor Hugo García is supported by a Wellcome Trust International Senior Research Fellowhip in Tropical Medicine and Public Health. The funders had no role in study design, data collection and analysis, decision to publish, or preparation of the manuscript.