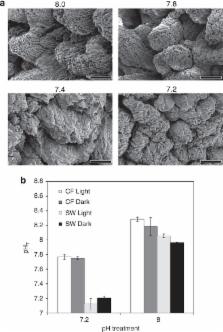 Ocean acidification causes corals to calcify at reduced rates, but current understanding of the underlying processes is limited. Here, we conduct a mechanistic study into how seawater acidification alters skeletal growth of the coral Stylophora pistillata. Reductions in colony calcification rates are manifested as increases in skeletal porosity at lower pH, while linear extension of skeletons remains unchanged. Inspection of the microstructure of skeletons and measurements of pH at the site of calcification indicate that dissolution is not responsible for changes in skeletal porosity. Instead, changes occur by enlargement of corallite-calyxes and thinning of associated skeletal elements, constituting a modification in skeleton architecture. We also detect increases in the organic matrix protein content of skeletons formed under lower pH. Overall, our study reveals that seawater acidification not only causes decreases in calcification, but can also cause morphological change of the coral skeleton to a more porous and potentially fragile phenotype. 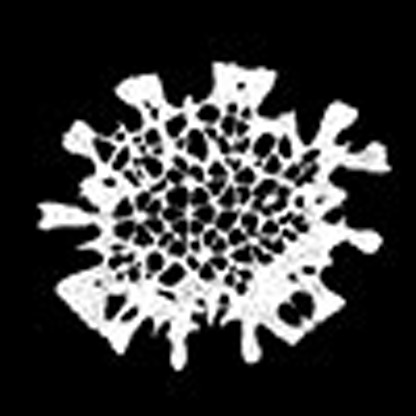 K. R. N. Anthony,  D. I. Kline,  G. Diaz-Pulido … (2008)
Ocean acidification represents a key threat to coral reefs by reducing the calcification rate of framework builders. In addition, acidification is likely to affect the relationship between corals and their symbiotic dinoflagellates and the productivity of this association. However, little is known about how acidification impacts on the physiology of reef builders and how acidification interacts with warming. Here, we report on an 8-week study that compared bleaching, productivity, and calcification responses of crustose coralline algae (CCA) and branching (Acropora) and massive (Porites) coral species in response to acidification and warming. Using a 30-tank experimental system, we manipulated CO(2) levels to simulate doubling and three- to fourfold increases [Intergovernmental Panel on Climate Change (IPCC) projection categories IV and VI] relative to present-day levels under cool and warm scenarios. Results indicated that high CO(2) is a bleaching agent for corals and CCA under high irradiance, acting synergistically with warming to lower thermal bleaching thresholds. We propose that CO(2) induces bleaching via its impact on photoprotective mechanisms of the photosystems. Overall, acidification impacted more strongly on bleaching and productivity than on calcification. Interestingly, the intermediate, warm CO(2) scenario led to a 30% increase in productivity in Acropora, whereas high CO(2) lead to zero productivity in both corals. CCA were most sensitive to acidification, with high CO(2) leading to negative productivity and high rates of net dissolution. Our findings suggest that sensitive reef-building species such as CCA may be pushed beyond their thresholds for growth and survival within the next few decades whereas corals will show delayed and mixed responses.

An acidic matrix protein, Pif, is a key macromolecule for nacre formation.

Kazuko Saruwatari,  T Kogure,  Y. Yamamoto … (2009)
The mollusk shell is a hard tissue consisting of calcium carbonate crystals and an organic matrix. The nacre of the shell is characterized by a stacked compartment structure with a uniformly oriented c axis of aragonite crystals in each compartment. Using a calcium carbonate-binding assay, we identified an acidic matrix protein, Pif, in the pearl oyster Pinctada fucata that specifically binds to aragonite crystals. The Pif complementary DNA (cDNA) encoded a precursor protein, which was posttranslationally cleaved to produce Pif 97 and Pif 80. The results from immunolocalization, a knockdown experiment that used RNA interference, and in vitro calcium carbonate crystallization studies strongly indicate that Pif regulates nacre formation.

Whole transcriptome analysis of the coral Acropora millepora reveals complex responses to CO₂-driven acidification during the initiation of calcification.

A. Moya,  L Huisman,  E E Ball … (2012)
The impact of ocean acidification (OA) on coral calcification, a subject of intense current interest, is poorly understood in part because of the presence of symbionts in adult corals. Early life history stages of Acropora spp. provide an opportunity to study the effects of elevated CO(2) on coral calcification without the complication of symbiont metabolism. Therefore, we used the Illumina RNAseq approach to study the effects of acute exposure to elevated CO(2) on gene expression in primary polyps of Acropora millepora, using as reference a novel comprehensive transcriptome assembly developed for this study. Gene ontology analysis of this whole transcriptome data set indicated that CO(2) -driven acidification strongly suppressed metabolism but enhanced extracellular organic matrix synthesis, whereas targeted analyses revealed complex effects on genes implicated in calcification. Unexpectedly, expression of most ion transport proteins was unaffected, while many membrane-associated or secreted carbonic anhydrases were expressed at lower levels. The most dramatic effect of CO(2) -driven acidification, however, was on genes encoding candidate and known components of the skeletal organic matrix that controls CaCO(3) deposition. The skeletal organic matrix effects included elevated expression of adult-type galaxins and some secreted acidic proteins, but down-regulation of other galaxins, secreted acidic proteins, SCRiPs and other coral-specific genes, suggesting specialized roles for the members of these protein families and complex impacts of OA on mineral deposition. This study is the first exhaustive exploration of the transcriptomic response of a scleractinian coral to acidification and provides an unbiased perspective on its effects during the early stages of calcification. © 2012 Blackwell Publishing Ltd.

These authors contributed equally to the work