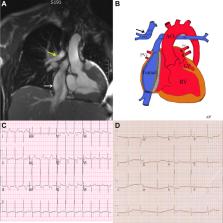 P Kilner,  M Gewillig,  Simon Bull … (1988)
To understand better the contribution of a right atrium in a valveless atriopulmonary connection, we performed some basic hydrodynamic studies. Pulsation of a valveless chamber in a simple continuous flow circuit was found to generate turbulence and thereby to increase resistance to net forward flow. Visualization of flow through cavities and around corners and measurements of energy losses across nonpulsatile cavities, corners, and stenoses indicated the importance of streamlining. These studies suggested ways in which hydrodynamic designs of the Fontan circulation might be improved. In parallel with these in vitro studies, we have developed a modified approach to Fontan reconstruction that entails exclusion of most or all of the right atrium (total cavopulmonary connection). The operation consists of three parts: (1) end-to-side anastomosis of the superior vena cava to the undivided right pulmonary artery; (2) construction of a composite intraatrial tunnel with the use of the posterior wall of the right atrium; and (3) use of a prosthetic patch to channel the inferior vena cava to the enlarged orifice of the transected superior vena cava that is anastomosed to the main pulmonary artery. The operation was performed in 20 patients between March 1987 and March 1988. The diagnoses were double-inlet ventricle (11 patients), hypoplastic systemic or pulmonary ventricle (seven patients), and absent right atrioventricular connection (two patients). There were two early deaths and one late death. None of the deaths was related to the actual procedure but rather to increased pulmonary vascular resistance (two patients) or systemic ventricular failure (one patient). Total cavopulmonary connections have the following advantages: (1) They are technically simple and reproducible in any atrioventricular arrangement and are away from the atrioventricular node; (2) most of the right atrial chamber remains at low pressure, which reduces the risk of early or late arrhythmias; (3) reduction of turbulence prevents energy losses and should minimize the risk of atrial thrombosis; (4) postoperative cardiac catheterization performed in 10 patients confirmed these favorable flow patterns with minimal gradients throughout the connections. These encouraging early results support the continuing use of total cavopulmonary connection, at least for patients with a nonhypertrophied right atrium.