The effects of food advertising and cognitive load on food choices 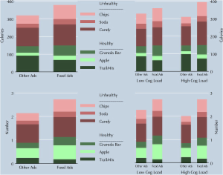 Advertising has been implicated in the declining quality of the American diet, but much of the research has been conducted with children rather than adults. This study tested the effects of televised food advertising on adult food choice.

Televised food advertising has strong effects on individual food choice, and these effects are magnified when individuals are cognitively occupied by other tasks.

Heart and Mind in Conflict: the Interplay of Affect and Cognition in Consumer Decision Making

The contribution of expanding portion sizes to the US obesity epidemic.

Lisa Young,  Marion Nestle (2002)
Because larger food portions could be contributing to the increasing prevalence of overweight and obesity, this study was designed to weigh samples of marketplace foods, identify historical changes in the sizes of those foods, and compare current portions with federal standards. We obtained information about current portions from manufacturers or from direct weighing; we obtained information about past portions from manufacturers or contemporary publications. Marketplace food portions have increased in size and now exceed federal standards. Portion sizes began to grow in the 1970s, rose sharply in the 1980s, and have continued in parallel with increasing body weights. Because energy content increases with portion size, educational and other public health efforts to address obesity should focus on the need for people to consume smaller portions.