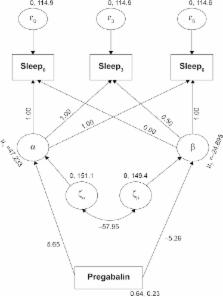 Anxiety disorders are among the most common psychiatric illnesses, with generalized anxiety disorder (GAD) being one of the most common. Sleep disturbances are highly prevalent in GAD patients. While treatment with pregabalin has been found to be associated with significant improvement in GAD-related sleep disturbance across many controlled clinical trials, mediational analysis has suggested that a substantial portion of this effect could be the result of a direct effect of pregabalin. Thus, the objective of this study was to model the longitudinal latent effect of pregabalin or usual care (UC) therapies on changes in sleep in outpatients with GAD under routine clinical practice.

Axis I psychiatric comorbidity and its relationship to historical illness variables in 288 patients with bipolar disorder.

Mark Pollack,  C. Pande,  R Lydiard … (2005)
Pregabalin inhibits release of excess excitatory neurotransmitters, presumably by binding to the alpha2-delta subunit protein of widely distributed voltage-dependent calcium channels in the brain and spinal cord. To assess the anxiolytic efficacy of pregabalin in patients with generalized anxiety disorder. Double-blind, placebo-controlled, active-comparator trial. Patients were randomized to 4 weeks of treatment with pregabalin, 300 mg/d (n = 91), 450 mg/d (n = 90), or 600 mg/d (n = 89); alprazolam, 1.5 mg/d (n = 93); or placebo (n = 91). Psychiatry research and clinic settings. Outpatients meeting the DSM-IV criteria for generalized anxiety disorder, with a baseline Hamilton Anxiety Rating Scale (HAM-A) total score of 20 or greater. Change from baseline to end point in total HAM-A score in the pregabalin and alprazolam groups compared with the placebo group. The end point response criterion was 50% or greater reduction in the HAM-A total score. Pregabalin and alprazolam produced a significantly greater reduction in mean +/- SE HAM-A total score at last-observation-carried-forward end point compared with placebo (-8.4 +/- 0.8): pregabalin, 300 mg (-12.2 +/- 0.8, P<.001), 450 mg (-11.0 +/- 0.8, P = .02), and 600 mg (-11.8 +/- 0.8, P = .002), and alprazolam (-10.9 +/- 0.8, P = .02). By week 1 and at last-observation-carried-forward end point, the 3 pregabalin groups and the alprazolam group had significantly (P<.01) improved HAM-A psychic anxiety symptoms compared with the placebo group. Compared with the placebo group, HAM-A somatic anxiety symptoms were also significantly (P<.02) improved by the 300- and 600-mg pregabalin groups, but not by the 450-mg pregabalin (week 1, P = .06; week 4, P = .32) and the alprazolam groups (week 1, P = .21; week 4, P = .15). Of the 5 treatment groups, the 300-mg pregabalin group was the only medication group that differed statistically in global improvement at treatment end point not only from the placebo group but also from the alprazolam group. Pregabalin was significantly more efficacious than placebo for the treatment of psychic and somatic symptoms of generalized anxiety disorder and was well tolerated by most study patients.