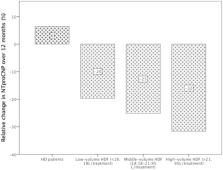 C-type natriuretic peptide (CNP) and its co-product N-terminal proCNP (NTproCNP) have been associated with beneficial effects on the cardiovascular system. In prevalent dialysis patients, however, a relation between NTproCNP and mortality has not yet been investigated. Furthermore, as a middle molecular weight substance, its concentration might be influenced by dialysis modality.

In a cohort of patients treated with haemodialysis (HD) or haemodiafiltration (HDF), levels of NTproCNP were measured at baseline and 6, 12, 24 and 36 months. The relation between serum NTproCNP and mortality and the relation between the 6-month rate of change of NTproCNP and mortality were analysed using Cox regression models. For the longitudinal analyses, linear mixed models were used.

In total, 406 subjects were studied. The median baseline serum NTproCNP was 93 pmol/L and the median follow-up was 2.97 years. No relation between baseline NTproCNP or its rate of change over 6 months and mortality was found. NTproCNP levels remained stable in HD patients, whereas NTproCNP decreased significantly in HDF patients. The relative decline depended on the magnitude of the convection volume.

In our study, levels of NTproCNP appear strongly elevated in prevalent dialysis patients. Second, while NTproCNP remains unaltered in HD patients, its levels decline in individuals treated with HDF, with the decline dependent on the magnitude of the convection volume. Third, NTproCNP is not related to mortality in this population. Thus NTproCNP does not seem to be a useful marker for mortality risk in dialysis patients.

Y Saito,  Y Ogawa,  M Suda … (2001)
Longitudinal bone growth is determined by endochondral ossification that occurs as chondrocytes in the cartilaginous growth plate undergo proliferation, hypertrophy, cell death, and osteoblastic replacement. The natriuretic peptide family consists of three structurally related endogenous ligands, atrial, brain, and C-type natriuretic peptides (ANP, BNP, and CNP), and is thought to be involved in a variety of homeostatic processes. To investigate the physiological significance of CNP in vivo, we generated mice with targeted disruption of CNP (Nppc(-/-) mice). The Nppc(-/-) mice show severe dwarfism as a result of impaired endochondral ossification. They are all viable perinatally, but less than half can survive during postnatal development. The skeletal phenotypes are histologically similar to those seen in patients with achondroplasia, the most common genetic form of human dwarfism. Targeted expression of CNP in the growth plate chondrocytes can rescue the skeletal defect of Nppc(-/-) mice and allow their prolonged survival. This study demonstrates that CNP acts locally as a positive regulator of endochondral ossification in vivo and suggests its pathophysiological and therapeutic implication in some forms of skeletal dysplasia.

S Suga,  H Itoh,  Y Komatsu … (1992)
C-type natriuretic peptide (CNP), the third member of the natriuretic peptide family, is thus far known to be distributed mainly in the central nervous system and is considered to act as a neuropeptide, in contrast to atrial natriuretic peptide (ANP) and brain natriuretic peptide (BNP), which act as cardiac hormones. Recently, we and others have demonstrated that the ANP-B receptor, which is selectively activated by CNP, is localized not only in the central nervous system but in peripheral tissues, including blood vessels. This finding has made us speculate regarding the peripheral production of CNP. In the present study, cultured endothelial cells were examined for CNP production by RIA and Northern blot analysis. CNP-like immunoreactivity was detected in the conditioned media of endothelial cells. Northern blot analysis detected CNPmRNA with a size of 1.2 kb. In addition, transforming growth factor (TGF)-beta, one of the key growth factors for vascular remodeling, markedly stimulated the expression of CNPmRNA and induced a tremendous increase in CNP secretion. We could also detect CNP transcript in the bovine thoracic aorta using the reverse transcription-polymerase chain reaction method. The present study demonstrates the endothelial production of CNP and suggests that a member of the natriuretic peptide family may act as a local regulator in vascular walls. Since evidence for the pathophysiological importance of the vascular renin-angiotensin system has been accumulating and the natriuretic peptide system is known to be antagonistic to the renin-angiotensin system, the possible existence of "vascular natriuretic peptide system" may prove to be of physiological and clinical relevance.