Styleworts under the microscope: a taxonomic account of Levenhookia (Stylidiaceae) 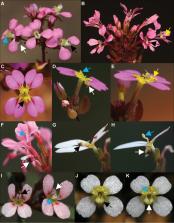 A taxonomic revision of the Australian endemic genus Levenhookia R.Br. ( Stylidiaceae ) recognises 12 species, of which L. aestiva Wege, sp. nov. from south-western Australia is newly described. Levenhookia preissii (Sond.) F.Muell. is lectotypified and recircumscribed as a Swan Coastal Plain endemic, resulting in its addition to the Threatened and Priority Flora List for Western Australia. Lectotypes are also selected for L. dubia Sond., L. leptantha Benth., L. sonderi (F.Muell.) F.Muell. and L. stipitata (Benth.) F.Muell. ex Benth. Verification of herbarium records has expanded the known distribution of L. murfetii Lowrie & Conran and L. pulcherrima Carlquist and has confirmed the widespread distribution of L. dubia across southern Australia including Tasmania, where it is currently listed as extinct-surveys based on information gleaned from historical collections may lead to its rediscovery in this State. Descriptions, distribution maps and photographs for all species are provided along with a key to species.

Roger G. Shivas,  Dean R. Beasley,  Alistair R. McTaggart (2014)
Interactive identification keys for Australian smut fungi (Ustilaginomycotina and Pucciniomycotina, Microbotryales) and rust fungi (Pucciniomycotina, Pucciniales) are available online at http://collections.daff.qld.gov.au. The keys were built using Lucid software, and facilitate the identification of all known Australian smut fungi (317 species in 37 genera) and 100 rust fungi (from approximately 360 species in 37 genera). The smut and rust keys are illustrated with over 1,600 and 570 images respectively. The keys are designed to assist a wide range of end-users including mycologists, plant health diagnosticians, biosecurity scientists, plant pathologists, and university students. The keys are dynamic and will be regularly updated to include taxonomic changes and incorporate new detections, taxa, distributions and images. Researchers working with Australian smut and rust fungi are encouraged to participate in the on-going development and improvement of these keys.