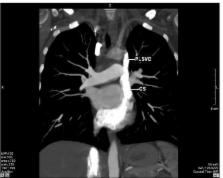 We report on a rare case of persistent left superior vena cava (PLSVC) with absent right superior vena cava (RSVC), an anomaly that is also known as isolated PLSVC. This venous malformation was identified incidentally in a 30-year-old woman during thoracic multi-detector computed tomography (MDCT), which was performed with the suspicion of intra-thoracic malignancy.

On thoracic MDCT, the RSVC was absent. A bridging vein drained the right jugular and right subclavian veins and joined the left brachiocephalic vein in order to form the PLSVC, which descended on the left side of the mediastinum and drained into the right atrium (RA) via a dilated coronary sinus (CS). The patient was referred to the cardiology department for further evaluation. Transthoracic echocardiography revealed a dilated CS, and agitated saline injected from the left or right arms revealed opacification of the CS before the RA. The patient had no additional cardiac abnormality.

Isolated PLSVC is usually asymptomatic but it can pose difficulties with central venous access, pacemaker implantation and cardiothoracic surgery. This condition is also associated with an increased incidence of congenital heart disease, arrhythmias and conduction disturbances. A wide spectrum of clinicians should be aware of this anomaly, its variations and possible complications.

M Biffi,  L Frabetti,  A Branzi … (2001)
The persistence of a left superior vena cava (LSVC) has been observed in 0.3% of the general population as established by autopsy. In the adult population, it is an important anatomic finding if a left superior approach to the heart is considered. The aim of the study was to evaluate the prevalence of a LSVC in patients undergoing pacemaker (PM) and cardioverter-defibrillator (CD) implantation. We observed the prevalence of LSVC during a 10-year period; each patient undergoing PM or transvenous CD implantation received a left cephalic/left subclavian venous approach to the heart. With this technique, LSVC persistence is easily diagnosed during lead placement. A total of 1,139 patients consecutively underwent PM implantation during 10 years: 4 patients had persistent LSCV (0.34%). Among 115 patients undergoing CD implantation, 2 patients with LSVC (1.7%) were observed. Overall LSVC persistence was found in 6 of 1,254 patients (0.47%). Two patients, one of whom had no right superior vena cava (RSVC), received a left-sided PM, whereas two other patients received right-sided devices. Both CD patients received a left-sided active-can device: the first patient with a right-sided lead tunneled to the left pectoral pocket, as a result of poor catheter handling through the LSVC and coronary sinus, and the second patient with a screw-in lead from LSVC. Long-term follow-up of these patients (average +/- SD, 41 +/- 26 months) revealed absence of lead dislodgment and appropriate device function regardless of lead implantation site. Persistence of LSVC in adults undergoing PM/CD implantation is similar to that of the general population (0.47% in our study). The left-sided implant can be achieved by stylet shaping and by use of active fixation leads in most patients, with a reliable outcome at short term in addition to appropriate device performance at follow-up. Assessment of the RSVC is advisable when planning a right-sided implantation, since a minority of patients lacks this vessel.

Ulrike Bartram,  Stella Van Praagh,  Jami C Levine … (1997)
Absence of the right superior vena cava (SVC) in visceroatrial situs solitus is rare (0.07% to 0.13% of congenital cardiovascular malformations), and little is known about the type and frequency of additional heart defects and arrhythmias. We reviewed previous publications and present 9 new cases. Based on 121 known cases, we found that this anomaly is typically characterized by: (1) persistence of the left SVC draining into the right atrium by way of the coronary sinus, and (2) left-sided azygos vein draining into the left SVC. Less constant features were: (3) additional cardiovascular malformations (46%), and (4) rhythm abnormalities (36%) that usually appeared related to the complications of old age. Since absence of the right SVC is clinically silent, its status should be assessed echocardiographically prior to invasive medical or surgical procedures. This is important to avoid various management difficulties during the following procedures: (1) implantation of a transvenous pacemaker, (2) placement of a pulmonary artery catheter for intraoperative or intensive care unit monitoring without fluoroscopy, (3) systemic venous cannulation for extracorporeal membrane oxygenation, (4) systemic venous cannulation for cardiopulmonary bypass, (5) partial or total cavopulmonary anastomoses; and (6) orthotopic heart transplantation and endomyocardial biopsies.

Garth L J Dixon,  C Hanratty,  Lisa M. Trimble … (2002)
The embryological development of the superior vena cava (SVC) is complex. If the left common cardinal vein fails to occlude it can, along with the left duct of Cuvier form a left SVC, which frequently drains into the coronary sinus. This may result in abnormalities in the anatomy of this structure. A persistent left SVC occurs in 0.5% of the normal population, and 3% to 4.3% of patients with congenital heart anomalies. The pacemaking tissue of the heart is derived from two sites near the progenitors of the superior vena cava. The right-sided site forms the sinoatrial node, the left-sided site is normally carried down to an area near the coronary sinus. Out of 300 patients with cardiac rhythm abnormalities, who have undergone electrophysiological studies (EPS), or permanent pacemaker insertion (PPI), we identified 12 patients with cardiac conduction abnormalities and anomalies of venous drainage. Anomalies of the coronary sinus may be associated with abnormalities of the conduction system of the heart. This may be due to the close proximity of the coronary sinus to the final position of the left-sided primitive pacemaking tissue. In our series of 300 patients, 4% had an associated left SVC, a similar incidence to that found in previous studies of congenital heart disease.