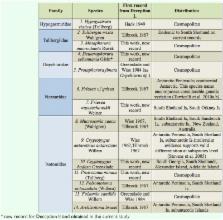 Three new non-indigenous springtail species are recorded in recent collections made on Deception Island, South Shetland Islands, maritime Antarctic: Deuteraphorura ( Deuteraphorura) cebennaria (Gisin) (Collembola: Onychiuridae), Mesaphorura macrochaeta Rusek (Tullbergiidae), and Proisotoma minuta Axelson (Isotomidae). One of these, D. ( D.) cebennaria, is described. Additionally, two new indigenous species, Mesaphorura macrochaeta Rusek and Proisotoma minuta Axelson, are also recorded. The total number of Collembola species now known from the island is 14, comprised of eight native species and six non-indigenous species. This number of non-indigenous species recorded at Deception Island compares with only a single non-indigenous springtail recorded at any other maritime or continental Antarctic location. The reason underlying this high level of occurrence of non-indigenous species on Deception Island is likely to be a combination of the island's high level of human visitation and the presence of relatively benign terrestrial habitats associated with areas of geothermal activity. Two of the new records represent species recently assessed as being of the highest risk to become invaders in the less extreme environments of the subantarctic, thereby emphasising the importance and urgency of adopting and applying effective biosecurity measures to protect the unique and vulnerable ecosystems of this region. Also documented are the impacts on the soil fauna of the island from human trampling, which drastically reduced densities of both native and non-indigenous species to 1% of the abundance typical of non-trampled sites.

Biological invasions in the Antarctic: extent, impacts and implications.

Yves Frenot,  Patricia M Selkirk,  D. Bergström … (2005)
Alien microbes, fungi, plants and animals occur on most of the sub-Antarctic islands and some parts of the Antarctic continent. These have arrived over approximately the last two centuries, coincident with human activity in the region. Introduction routes have varied, but are largely associated with movement of people and cargo in connection with industrial, national scientific program and tourist operations. The large majority of aliens are European in origin. They have both direct and indirect impacts on the functioning of species-poor Antarctic ecosystems, in particular including substantial loss of local biodiversity and changes to ecosystem processes. With rapid climate change occurring in some parts of Antarctica, elevated numbers of introductions and enhanced success of colonization by aliens are likely, with consequent increases in impacts on ecosystems. Mitigation measures that will substantially reduce the risk of introductions to Antarctica and the sub-Antarctic must focus on reducing propagule loads on humans, and their food, cargo, and transport vessels.

Kevin A. Hughes,  Peter Convey (2012)
Continental Antarctic terrestrial and freshwater environments currently have few established non-native species compared to the sub-Antarctic islands and other terrestrial ecosystems on Earth. This is due to a unique combination of factors including Antarctica's remoteness, harsh climate, physical geography and brief history of human activity. However, recent increases in national operator and tourism activities increase the risk of non-native propagules reaching Antarctica, while climate change may make successful establishment more likely. The frequency and probability of human-assisted transfer mechanisms appear to far outweigh those of natural propagule introductions by wind, water, birds and marine mammals. A dilemma for scientists and environmental managers, which is exacerbated by a poor baseline knowledge of Antarctic biodiversity, is how to determine the native/non-native status of a newly discovered species which could be (a) a previously undiscovered long-term native species, (b) a recent natural colonist or (c) a human-mediated introduction. A correct diagnosis is crucial as the Protocol on Environmental Protection to the Antarctic Treaty dictates dramatically different management responses depending on native/non-native status: native species and recent natural colonists should be protected and conserved, while non-native introductions should be eradicated or controlled. We review current knowledge on how available evidence should be used to differentiate between native and non-native species, and discuss and recommend issues that should be considered by scientists and managers upon discovery of a species apparently new to the Antarctic region. Copyright © 2011 Elsevier Ltd. All rights reserved.

Editor: Daniela Takiya was editor of this paper.