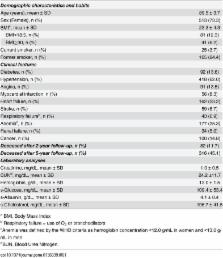 Kidney function declines considerably with age, but little is known about its clinical significance in the oldest-old.

To study the association between reduced glomerular filtration rate (GFR) estimated according to five equations with mortality in the oldest-old.

Prevalence of reduced GFR was 90.7% with the C-G, 48.1% with MDRD, 23.3% with MAYO, 53.6% with CKD-EPI and 84.4% with BIS-1. After adjustment for confounders, two-year mortality was significantly increased in subjects with reduced eGFR using BIS-1 and C-G equations (adjusted HRs: 2.88 and 3.30, respectively). Five-year mortality was significantly increased in subjects with eGFR <60 mL/min/1.73m 2 using MAYO, CKD-EPI and, in a graduated fashion in reduced eGFR categories, MDRD. After 5 years, oldest old with an eGFR <30 mL/min/1.73m 2 showed a significantly higher risk of death whichever equation was used (adjusted HRs between 2.04 and 2.70).

In the oldest old, prevalence of reduced eGFR varies noticeably depending on the equation used. In this population, risk of mortality was significantly higher for reduced GFR estimated with the BIS-1 and C-G equations over the short term. Though after five years the MDRD appeared on the whole a more consistent predictor, differences in mortality prediction among equations over the long term were less apparent. Noteworthy, subjects with a severely reduced GFR were consistently at higher risk of death regardless of the equation used to estimate GFR.

Finlay McAlister,  Marcello Tonelli,  C Rabbat … (2006)
Current guidelines identify people with chronic kidney disease (CKD) as being at high risk for cardiovascular and all-cause mortality. Because as many as 19 million Americans may have CKD, a comprehensive summary of this risk would be potentially useful for planning public health policy. A systematic review of the association between non-dialysis-dependent CKD and the risk for all-cause and cardiovascular mortality was conducted. Patient- and study-related characteristics that influenced the magnitude of these associations also were investigated. MEDLINE and EMBASE databases were searched, and reference lists through December 2004 were consulted. Authors of 10 primary studies provided additional data. Cohort studies or cohort analyses of randomized, controlled trials that compared mortality between those with and without chronically reduced kidney function were included. Studies were excluded from review when participants were followed for < 1 yr or had ESRD. Two reviewers independently extracted data on study setting, quality, participant and renal function characteristics, and outcomes. Thirty-nine studies that followed a total of 1,371,990 participants were reviewed. The unadjusted relative risk for mortality in participants with reduced kidney function compared with those without ranged from 0.94 to 5.0 and was significantly more than 1.0 in 93% of cohorts. Among the 16 studies that provided suitable data, the absolute risk for death increased exponentially with decreasing renal function. Fourteen cohorts described the risk for mortality from reduced kidney function, after adjustment for other established risk factors. Although adjusted relative hazards were consistently lower than unadjusted relative risks (median reduction 17%), they remained significantly more than 1.0 in 71% of cohorts. This review supports current guidelines that identify individuals with CKD as being at high risk for cardiovascular mortality. Determining which interventions best offset this risk remains a health priority.

Competing Interests: The IRCCS-Istituto di Ricerche Farmacologiche Mario Negri received a research grant from Amgen Italia for the "Health and Anemia Study." The authors have declared that they had/have no financial (employment, consultancy, patents, products in development, marketed products, etc.) and non-financial competing interests. The fact that IRFMN received a grant from Amgen does not alter the authors' adherence to PLOS ONE policies on sharing data and materials.

The “Health and Anemia Study” was supported by an unrestricted grant from Amgen. The sponsor had no role in the conception and design of the study; collection, management, analysis or interpretation of data; writing of the report; or the decision to submit the article for publication.

Data Availability Since in the study consent forms signed by the subjects, the possibility that the subjects’ data could be made available upon request by others was not foreseen, we will first need to submit these possible requests for data to the local Ethics Committee for approval. Data are from the "HEALTH AND ANEMIA" study whose author Emma Riva may be contacted at the following mail address: emma.riva@ 123456marionegri.it .
Data availability:
ScienceOpen disciplines: Uncategorized