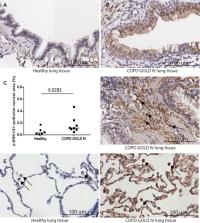 The aim of this study was to address whether MEK1/2 pathway activation is linked to COPD and that targeting this pathway can improve lung inflammation through decreased immune-mediated inflammatory responses without compromising bacterial clearance.

Association of MEK1/2 pathway activation to COPD was investigated by immunohistochemistry using lung tissue biopsies from COPD and healthy individuals and through analysis of sputum gene expression data from COPD patients. The anti-inflammatory effect of MEK1/2 inhibition was assessed on cytokine release from lipopolysaccharide-stimulated alveolar macrophages. The effect of MEK1/2 inhibition on bacterial clearance was assessed using Staphylococcus aureus killing assays with RAW 264.7 macrophage cell line and human neutrophils.

We report here MEK1/2 pathway activation demonstrated by increased pERK1/2 staining in bronchial epithelium and by the presence of MEK gene activation signature in sputum samples from COPD patients. Inhibition of MEK1/2 resulted in a superior anti-inflammatory effect in human alveolar macrophages in comparison to a p38 inhibitor. Furthermore, MEK1/2 inhibition led to an increase in bacterial killing in human neutrophils and RAW 264.7 cells that was not observed with the p38 inhibitor.

Our data demonstrate the activation of MEK1/2 pathway in COPD and highlight a dual function of MEK1/2 inhibition in improving host defense responses whilst also controlling inflammation.

Influenza virus propagation is impaired by inhibition of the Raf/MEK/ERK signalling cascade.

Stephan Pleschka,  O Planz,  G Hobom … (2001)
Influenza A viruses are important worldwide pathogens in humans and different animal species. The functions of most of the ten different viral proteins of this negative-strand RNA virus have been well elucidated. However, little is known about the virus-induced intracellular signalling events that support viral replication. The Raf/MEK/ERK cascade is the prototype of mitogen-activated protein (MAP) kinase cascades and has an important role in cell growth, differentiation and survival. Investigation of the function of this pathway has been facilitated by the identification of specific inhibitors such as U0126, which blocks the cascade at the level of MAPK/ERK kinase (MEK). Here we show that infection of cells with influenza A virus leads to biphasic activation of the Raf/MEK/ERK cascade. Inhibition of Raf signalling results in nuclear retention of viral ribonucleoprotein complexes (RNPs), impaired function of the nuclear-export protein (NEP/NS2) and concomitant inhibition of virus production. Thus, signalling through the mitogenic cascade seems to be essential for virus production and RNP export from the nucleus during the viral life cycle.

C Vecchio,  M Saetta,  Claudio Donner … (1998)
To investigate the relationship between airflow limitation and airway inflammation in smokers, we examined paraffin-embedded bronchial biopsies obtained from 30 smokers: 10 with severe airflow limitation, eight with mild/moderate airflow limitation, and 12 control smokers with normal lung function. Histochemical and immunohistochemical methods were performed to assess the number of inflammatory cells in the subepithelium and the expression of CC chemokines macrophage inflammatory protein (MIP)-1alpha and -1beta in the bronchial mucosa. Compared with control smokers, smokers with severe airflow limitation had an increased number of neutrophils (p < 0.02), macrophages (p < 0.03), and NK lymphocytes (p < 0.03) in the subepithelium, and an increased number of MIP-1alpha+ epithelial cells (p < 0.02). When all smokers were considered together, the value of FEV1 was inversely correlated with the number of neutrophils (r = -0.59, p < 0.002), macrophages (r = -047, p < 0. 012), NK-lymphocytes (r = -0.51, p < 0.006) in the subepithelium, and with the number of MIP-1alpha+ epithelial cells (r = -0.61, p < 0.003). We conclude that in smokers the severity of airflow limitation is correlated with the severity of airway inflammation and that severe airflow limitation is associated with an increased number of neutrophils, macrophages, NK lymphocytes, and MIP-1alpha+ cells in the bronchial mucosa.