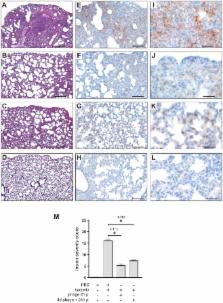 Multidrug-resistant bacteria are the cause of an increasing number of deadly pulmonary infections. Because there is currently a paucity of novel antibiotics, phage therapy—the use of specific viruses that infect bacteria—is now more frequently being considered as a potential treatment for bacterial infections. Using a mouse lung-infection model caused by a multidrug resistant Pseudomonas aeruginosa mucoid strain isolated from a cystic fibrosis patient, we evaluated bacteriophage treatments. New bacteriophages were isolated from environmental samples and characterized. Bacteria and bacteriophages were applied intranasally to the immunocompetent mice. Survival was monitored and bronchoalveolar fluids were analysed. Quantification of bacteria, bacteriophages, pro-inflammatory and cytotoxicity markers, as well as histology and immunohistochemistry analyses were performed. A curative treatment (one single dose) administrated 2 h after the onset of the infection allowed over 95% survival. A four-day preventive treatment (one single dose) resulted in a 100% survival. All of the parameters measured correlated with the efficacy of both curative and preventive bacteriophage treatments. We also showed that in vitro optimization of a bacteriophage towards a clinical strain improved both its efficacy on in vivo treatments and its host range on a panel of 20 P. aeruginosa cystic fibrosis strains. This work provides an incentive to develop clinical studies on pulmonary bacteriophage therapy to combat multidrug-resistant lung infections.

Emergence of a new antibiotic resistance mechanism in India, Pakistan, and the UK: a molecular, biological, and epidemiological study

Karthikeyan K Kumarasamy,  Mark Toleman,  Timothy R. Walsh … (2010)
Summary Background Gram-negative Enterobacteriaceae with resistance to carbapenem conferred by New Delhi metallo-β-lactamase 1 (NDM-1) are potentially a major global health problem. We investigated the prevalence of NDM-1, in multidrug-resistant Enterobacteriaceae in India, Pakistan, and the UK. Methods Enterobacteriaceae isolates were studied from two major centres in India—Chennai (south India), Haryana (north India)—and those referred to the UK's national reference laboratory. Antibiotic susceptibilities were assessed, and the presence of the carbapenem resistance gene bla NDM-1 was established by PCR. Isolates were typed by pulsed-field gel electrophoresis of XbaI-restricted genomic DNA. Plasmids were analysed by S1 nuclease digestion and PCR typing. Case data for UK patients were reviewed for evidence of travel and recent admission to hospitals in India or Pakistan. Findings We identified 44 isolates with NDM-1 in Chennai, 26 in Haryana, 37 in the UK, and 73 in other sites in India and Pakistan. NDM-1 was mostly found among Escherichia coli (36) and Klebsiella pneumoniae (111), which were highly resistant to all antibiotics except to tigecycline and colistin. K pneumoniae isolates from Haryana were clonal but NDM-1 producers from the UK and Chennai were clonally diverse. Most isolates carried the NDM-1 gene on plasmids: those from UK and Chennai were readily transferable whereas those from Haryana were not conjugative. Many of the UK NDM-1 positive patients had travelled to India or Pakistan within the past year, or had links with these countries. Interpretation The potential of NDM-1 to be a worldwide public health problem is great, and co-ordinated international surveillance is needed. Funding European Union, Wellcome Trust, and Wyeth.

A controlled clinical trial of a therapeutic bacteriophage preparation in chronic otitis due to antibiotic-resistant Pseudomonas aeruginosa; a preliminary report of efficacy.

David Harper,  Julio C. Hawkins,  Graham A Wright … (2009)
To evaluate the efficacy and safety of a therapeutic bacteriophage preparation (Biophage-PA) targeting antibiotic-resistant Pseudomonas aeruginosa in chronic otitis. Randomised, double-blind, placebo-controlled Phase I/II clinical trial approved by UK Medicines and Healthcare products Regulatory Agency (MHRA) and the Central Office for Research Ethics Committees (COREC) ethical review process. A single specialist university hospital. 24 patients with chronic otitis with a duration of several years (2-58). Each patient had, at the time of entry to the trial, an ear infection because of an antibiotic-resistant P. aeruginosa strain sensitive to one or more of the six phages present in Biophage-PA. Participants were randomised in two groups of 12 treated with either a single dose of Biophage-PA or placebo and followed up at 7, 21 and 42 days after treatment by the same otologist. Ears were thoroughly cleaned on each occasion and clinical and microbiological indicators measured. Physician assessed erythema/inflammation, ulceration/granulation/polyps, discharge quantity, discharge type and odour using a Visual Analogue Scale (VAS). Patients reported discomfort, itchiness, wetness and smell also using a VAS. Bacterial levels of P. aeruginosa and phage counts from swabs were measured initially and at follow-up. At each visit patients were asked about side effects using a structured form. Digital otoscopic images were obtained on days 0 and 42 for illustrative purposes only. Relative to day 0, pooled patient- and physician-reported clinical indicators improved for the phage treated group relative to the placebo group. Variation from baseline levels was statistically significant for combined data from all clinic days only for the phage treated group. Variation from baseline levels was statistically significant for the majority of the patient assessed clinical indicators only for the phage treated group. P. aeruginosa counts were significantly lower only in the phage treated group. No treatment related adverse event was reported. The first controlled clinical trial of a therapeutic bacteriophage preparation showed efficacy and safety in chronic otitis because of chemo-resistant P. aeruginosa.

Daniel Summers (2000)
In 1917, bacteriophages were recognized as epizootic infections of bacteria and were almost immediately deployed for antibacterial therapy and prophylaxis. The early trials of bacteriophage therapy for infectious diseases were confounded, however, because the biological nature of bacteriophage was poorly understood. The early literature reviewed here indicates that there are good reasons to believe that phage therapy can be effective in some circumstances. The advent of antibiotics, together with the "Soviet taint" acquired by phage therapy in the postwar period, resulted in the absence of rigorous evaluations of phage therapy until very recently. Recent laboratory and animal studies, exploiting current understandings of phage biology, suggest that phages may be useful as antibacterial agents in certain conditions.

Publisher ID: PONE-D-10-04784
DOI: 10.1371/journal.pone.0016963
PMC ID: 3039662
PubMed ID: 21347240
Copyright statement: Morello et al. This is an open-access article distributed under the terms of the Creative Commons Attribution License, which permits unrestricted use, distribution, and reproduction in any medium, provided the original author and source are credited.