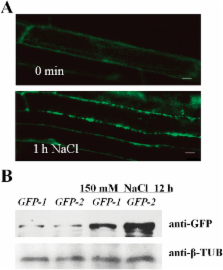 Tudor-SN protein accumulates in stress granules in response to salt stress in Arabidopsis. It binds GA20ox3 mRNA in vivo and up-regulates GA20ox3 levels to maintain plant growth under salt stress.

The Tudor-SN protein (TSN) is universally expressed and highly conserved in eukaryotes. In Arabidopsis, TSN is reportedly involved in stress adaptation, but the mechanism involved in this adaptation is not understood. Here, we provide evidence that TSN regulates the mRNA levels of GA20ox3, a key enzyme for gibberellin (GA) biosynthesis. The levels of GA20ox3 transcripts decreased in TSN1/ TSN2 RNA interference (RNAi) transgenic lines and increased in TSN1 over-expression (OE) transgenic lines. The TSN1 OE lines displayed phenotypes that may be attributed to the overproduction of GA. No obvious defects were observed in the RNAi transgenic lines under normal conditions, but under salt stress conditions these lines displayed slower growth than wild-type (WT) plants. Two mutants of GA20ox3, ga20ox3-1 and -2, also showed slower growth under stress than WT plants. Moreover, a higher accumulation of GA20ox3 transcripts was observed under salt stress. The results of a western blot analysis indicated that higher levels of TSN1 accumulated after salt treatment than under normal conditions. Subcellular localization studies showed that TSN1 was uniformly distributed in the cytoplasm under normal conditions but accumulated in small granules and co-localized with RBP47, a marker protein for stress granules (SGs), in response to salt stress. The results of RNA immunoprecipitation experiments indicated that TSN1 bound GA20ox3 mRNA in vivo. On the basis of these findings, we conclude that TSN is a novel component of plant SGs that regulates growth under salt stress by modulating levels of GA20ox3 mRNA.

A Bent,  Andrew Bent,  Timothy Clough … (1998)
The Agrobacterium vacuum infiltration method has made it possible to transform Arabidopsis thaliana without plant tissue culture or regeneration. In the present study, this method was evaluated and a substantially modified transformation method was developed. The labor-intensive vacuum infiltration process was eliminated in favor of simple dipping of developing floral tissues into a solution containing Agrobacterium tumefaciens, 5% sucrose and 500 microliters per litre of surfactant Silwet L-77. Sucrose and surfactant were critical to the success of the floral dip method. Plants inoculated when numerous immature floral buds and few siliques were present produced transformed progeny at the highest rate. Plant tissue culture media, the hormone benzylamino purine and pH adjustment were unnecessary, and Agrobacterium could be applied to plants at a range of cell densities. Repeated application of Agrobacterium improved transformation rates and overall yield of transformants approximately twofold. Covering plants for 1 day to retain humidity after inoculation also raised transformation rates twofold. Multiple ecotypes were transformable by this method. The modified method should facilitate high-throughput transformation of Arabidopsis for efforts such as T-DNA gene tagging, positional cloning, or attempts at targeted gene replacement.

Eukaryotic stress granules: the ins and outs of translation.

J. Ross Buchan,  Roy Parker (2009)
The stress response in eukaryotic cells often inhibits translation initiation and leads to the formation of cytoplasmic RNA-protein complexes referred to as stress granules. Stress granules contain nontranslating mRNAs, translation initiation components, and many additional proteins affecting mRNA function. Stress granules have been proposed to affect mRNA translation and stability and have been linked to apoptosis and nuclear processes. Stress granules also interact with P-bodies, another cytoplasmic RNP granule containing nontranslating mRNA, translation repressors, and some mRNA degradation machinery. Together, stress granules and P-bodies reveal a dynamic cycle of distinct biochemical and compartmentalized mRNPs in the cytosol, with implications for the control of mRNA function. 2009 Elsevier Inc.

Nancy Kedersha,  Georg Stoecklin,  Maranatha Ayodele … (2005)
Stress granules (SGs) are cytoplasmic aggregates of stalled translational preinitiation complexes that accumulate during stress. GW bodies/processing bodies (PBs) are distinct cytoplasmic sites of mRNA degradation. In this study, we show that SGs and PBs are spatially, compositionally, and functionally linked. SGs and PBs are induced by stress, but SG assembly requires eIF2α phosphorylation, whereas PB assembly does not. They are also dispersed by inhibitors of translational elongation and share several protein components, including Fas-activated serine/threonine phosphoprotein, XRN1, eIF4E, and tristetraprolin (TTP). In contrast, eIF3, G3BP, eIF4G, and PABP-1 are restricted to SGs, whereas DCP1a and 2 are confined to PBs. SGs and PBs also can harbor the same species of mRNA and physically associate with one another in vivo, an interaction that is promoted by the related mRNA decay factors TTP and BRF1. We propose that mRNA released from disassembled polysomes is sorted and remodeled at SGs, from which selected transcripts are delivered to PBs for degradation.