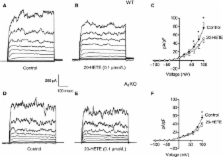 Adenosine receptors (AR; A 1, A 2A, A 2B, and A 3) contract and relax smooth muscle through different signaling mechanisms. Deciphering these complex responses remains difficult because relationships between AR subtypes and various end-effectors (e.g., enzymes and ion channels) remain to be identified. A 1AR stimulation is associated with the production of 20–hydroxyeicosatetraenoic acid (20–HETE) and activation of protein kinase C (PKC). 20–HETE and PKC can inhibit large conductance Ca 2+/voltage-sensitive K + (BK) channels that regulate smooth muscle contraction. We tested the hypothesis that activation of A 1AR inhibits BK channels via a PKC-dependent mechanism. Patch clamp recordings and Western blots were performed using aortae of wild type (WT) and A 1AR knockout (A 1KO) mice. There were no differences in whole-cell K + current or α and β1 subunits expression between WT and A 1KO. 20–HETE (100 nmol/L) inhibited BK current similarly in WT and A 1KO mice. NECA (5′–N–ethylcarboxamidoadenosine; 10 μmol/L), a nonselective AR agonist, increased BK current in myocytes from both WT and A 1KO mice, but the increase was greater in A 1KO (52 ± 15 vs. 17 ± 3%; P < 0.05). This suggests that A 1AR signaling negatively regulates BK channel activity. Accordingly, CCPA (2–chloro–N(6)-cyclopentyladenosine; 100 nmol/L), an A 1AR-selective agonist, inhibited BK current in myocytes from WT but not A 1KO mice (81 ± 4 vs. 100 ± 7% of control; P < 0.05). Gö6976 (100 nmol/L), a PKCα inhibitor, abolished the effect of CCPA to inhibit BK current (99 ± 3% of control). These data lead us to conclude that, in aortic smooth muscle, A 1AR inhibits BK channel activity and that this occurs via a mechanism involving PKCα.

Zhan Gao,  Susan K. Jacobson (2006)
Adenosine receptors are major targets of caffeine, the most commonly consumed drug in the world. There is growing evidence that they could also be promising therapeutic targets in a wide range of conditions, including cerebral and cardiac ischaemic diseases, sleep disorders, immune and inflammatory disorders and cancer. After more than three decades of medicinal chemistry research, a considerable number of selective agonists and antagonists of adenosine receptors have been discovered, and some have been clinically evaluated, although none has yet received regulatory approval. However, recent advances in the understanding of the roles of the various adenosine receptor subtypes, and in the development of selective and potent ligands, as discussed in this review, have brought the goal of therapeutic application of adenosine receptor modulators considerably closer.