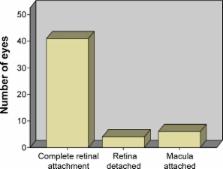 The aim of this study is to report the anatomic and functional outcomes of retinectomy for the management of rhegmatogenous retinal detachment complicated by proliferative vitreoretinopathy (PVR), comparing them with previously reported data and determining prognostic factors. Fifty-one eyes of 51 patients with established PVR grade C in which retinectomy was performed were retrospectively enrolled in the study. Primary outcome measures were anatomic success rate and final visual acuity. Secondary outcome measures were intraoperative complications, number of re-operations, and postoperative hypotony. Prognostic factors in relation to retinal re-attachment and final visual acuity were retrospectively analyzed. The rate of complete retinal re-attachment after one operation was 80% and after two operations it was 84%. At the end of the follow-up, the macula was attached in 96% of the cases. Mean LogMAR best-corrected visual acuity (BCVA) improved significantly from 2.45±0.66 preoperatively to 1.37±0.75 at the end of the follow-up ( P<0.001). BCVA improved in 37 eyes (72%), remained the same in eleven eyes (22%) and worsened in three eyes (6%). Postoperative hypotony was observed in 2% of cases. Postoperative BCVA was significantly correlated with preoperative BCVA ( P<0.001), extension of PVR ( P=0.013), preoperative use of gas instead of silicone oil (SO) ( P=0.01), and removal of SO ( P=0.05). SO was left in situ in 35% of eyes. In conclusion, retinectomy is a surgical option providing good anatomical and reasonable visual outcomes in complicated retinal detachment with PVR. Better preoperative visual acuity, lesser extension of PVR, and the use of gas tamponade during the primary repair are relevant factors for a successful outcome whereas re-proliferation of epiretinal membranes seems to be the main reason of anatomical failure.

An updated classification of retinal detachment with proliferative vitreoretinopathy.

A Blair Irvine,  Michael Lean,  Katherine H. Freeman … (1991)
The Retinal Society classification on proliferative vitreoretinopathy of 1983 has been updated to accommodate major progress in understanding of this disease. There are three grades describing increasing severity of the disease. Posterior and anterior location of the proliferations have been emphasized. A more detailed description of posterior and anterior contractions has been made possible by adding contraction types such as focal, diffuse, subretinal, circumferential contraction, and anterior displacement. The extent of the abnormality has been detailed by using clock hours instead of quadrants.

Outcomes of vitrectomy with inferior retinectomy in patients with recurrent rhegmatogenous retinal detachments and proliferative vitreoretinopathy.

Anurag Gupta,  M Yoshizumi,  C Gonzales … (2006)
To report the anatomic and functional outcomes of patients treated with vitrectomy and inferior retinectomy for recurrent, rhegmatogenous retinal detachment complicated by proliferative vitreoretinopathy (PVR). Retrospective, noncomparative, interventional case series. Fifty-six patients with recurrent, rhegmatogenous retinal detachments complicated by PVR who underwent an inferior retinectomy for repair. Retrospective review over a 6-year period of patients treated with vitrectomy and inferior retinectomy. The primary outcome was anatomic success, defined as complete retinal reattachment. Secondary outcomes included change in visual acuity, the mean number of operations required for complete retinal reattachment, number of operations before retinectomy, use of silicone oil tamponade, location and extent of retinectomy, whether lensectomy was undertaken, and incidence of postoperative complications. Complete retinal reattachment was achieved in 52 of 56 patients (93%), with a mean follow-up of 25 months (range, 6-70 months). After retinal reattachment, visual acuity was improved or stabilized in 39 of 56 patients (70%). The mean number of operations for retinal detachment before diagnosis of PVR requiring retinectomy was 1.8 (range, 1-5). Patients undergoing radical anterior vitreous base dissection and lensectomy at the time of first retinectomy had a higher success rate than those who did not: 74% versus 38%, respectively (P = 0.011). Furthermore, tamponade with silicone oil had a higher success rate than tamponade with gas: 71% versus 18%, respectively (P = 0.002). Of the 56 patients, 9 (16%) had 1 or more of the following complications: keratopathy requiring penetrating keratoplasty (n = 4), glaucoma requiring aqueous shunt device (n = 3), and hypotony (n = 3). Silicone oil removal was performed in 26 of 45 patients (58%) before the last follow-up visit, with a 1 in 26 (4%) redetachment rate. When combined with anterior base dissection, inferior retinectomy may be useful in the surgical treatment of complex PVR-related retinal detachment. The authors show that with lensectomy, radical anterior base dissection, and inferior retinectomy, anatomic success rates are improved and visual function can be maintained. In addition, silicone oil offers an advantage over gas tamponade in these cases.

C Sethi,  G. Lewis,  D Charteris … (2002)
Proliferative vitreoretinopathy (PVR) remains a difficult management problem despite advances in vitreoretinal surgery. There is still a significant incidence of PVR in rhegmatogenous retinal detachment and other forms of retinal disease. Surgery for PVR now has a high anatomical success rate although visual results are often disappointing. The use of adjunctive treatments to prevent cellular proliferation holds promise for the prevention of PVR or recurrences after surgery. Control of proliferation and strategies aimed at improving visual outcome are important areas of future research in PVR and other forms of retinal disease. Studies of the intraretinal and peri-retinal pathology of PVR have demonstrated characteristic changes which may have a significant influence on visual outcome and surgical management.