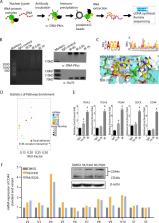 ScienceOpenPublisherPMC
Bookmark
There is no author summary for this article yet. Authors can add summaries to their articles on ScienceOpen to make them more accessible to a non-specialist audience.
To the Editor: The DNA-dependent protein kinase catalytic subunit (DNA-PKcs) forms a serine/threonine protein kinase complex with the Ku heterodimer (Ku70/Ku80) and plays an important role in the DNA damage response (DDR) and maintenance of genomic stability through nonhomologous end joining (NHEJ), wherein the Ku heterodimer recognizes and binds broken DNA ends, facilitating the recruitment and activation of DNA-PKcs. 1 Activated DNA-PKcs phosphorylates and alters the function of factors that mediate NHEJ, including DNA-PKcs itself. 2 In addition, DDR-independent roles of DNA-PKcs have been demonstrated. 3 Studies further identified DNA-PKcs as a modulator of cancer-associated pathways distinct from DNA repair, including hypoxia, metabolism, the inflammatory response, and transcriptional regulation. Although DNA-PKcs’s roles in Double Strand Breaks (DSB) repair and transcriptional regulation are well established, how the activity of DNA-PKcs or the DNA-PK complex is regulated remains mysterious. It has been previously reported that Ku70/Ku80 directly interacts with the telomerase RNA component, hTR 4 and that hTR stimulates DNA-PK kinase activity, which subsequently phosphorylates hnRNP A1. 5 The interplay between the DNA-PKcs/DNA-PK complex and RNA functions has emerged as an interesting topic in recent years. Long noncoding RNA LINP1 acts as a scaffold that links Ku and DNA-PKcs and enables efficient DNA double-strand break repair through nonhomologous end joining (NHEJ). 6 Given these intriguing examples, here we investigated whether DNA-PKcs may associate with RNA on a genome-wide scale. To characterize the genome-wide landscape of DNA-PKcs-associated RNAs, we used RNA immunoprecipitation coupled with next-generation sequencing (RIP-seq) to map the DNA-PKcs–RNA interactome in U2OS cells, as depicted in Fig. 1a. Nuclear RNAs immunoprecipitated by an α-DNA-PKcs antibody and control IgG were isolated from U2OS cells exposed to ionizing radiation (0.5 h and 1 h after radiation) and from unexposed cells (0 h) as the control. The α-DNA-PKcs antibody precipitated ~150 ng of RNA from 107 U2OS cells, while precipitation with IgG and precipitation in the no-IR control cells pulled down ~10-fold less RNA (~15 ng), as shown in Fig. 1b. Then, we computationally filtered out adaptors/primer dimers, rRNA, mitochondrial RNA, reads with <18 nt or indeterminate nucleotides, and homopolymer runs in excess of 15 bases. In total, ~1.2 million reads remained after filtering. Fig. 1 a Flow chart of DNA-PKcs RIP-Seq. b RNA electrophoresis of the immunoprecipitated RNA by an antibody specific for DNA-PKcs. c Motif analysis and docking interaction between DNA-PKcs and RNA-binding sites. d KEGG analysis of DNA-PKcs-bound RNAs. e RIP-qPCR validation of DNA-PKcs and RNA-binding partners. f DNA-PKcs inhibition altered the splicing pattern of CD44 RNA Then, motif analysis was performed using MEME and DREME software to detect significant motif sequences in the peak sequence. The Tomtom software was used to compare the obtained motif sequence against the known Motif database and annotate it using known motifs. The sequence logo in Fig. 1c shows both the short motif (<8) and long motif (6–30) with the highest binding potential. Motif analysis showed that DNA-PKcs preferentially binds the AGGA sequence, which was in accordance with previous findings (Fig. 1c). 7 Then, the docking between DNA-PKcs RNA-binding sites deduced from the web server PRIdictor and the RNA motif AGGA was performed on the FRODOCK webserver, and the docking structure was analyzed using PyMOL software (Fig. 1c). After analysis with a stringent cutoff, ~500 RNAs were precipitated by DNA-PKcs. To categorize the RNAs bound by DNA-PKcs, we performed KEGG analysis. This analysis showed a number of signatures involved in the Focal adhesion and Receptor-ECM interaction pathways (Fig. 1d). Then, the ITGA3, ITGA5, ITGAV, SDC4, and CD44 RNAs were selected for validation of the RIP-Seq results. The RIP-qPCR results showed different fold enrichment values for these five RNAs, which are involved in cell adhesion (Fig. 1e). Regulation of RNA alternative splicing is a crucial process in RNA-binding proteins function, and aberrant splicing is often associated with various human diseases including cancers; 8 therefore, to discern how DNA-PKcs modulates bound RNAs, we sought to determine whether DNA-PKcs could affect CD44 alternative splicing. Specific primers to amplify the CD44 standard sequence and variants were designed, and qPCR was performed to examine the expression of different variants after U2OS cells were treated with NU7441 and NU7026, which target DNA-PKcs. The results showed that V4, V9, and V10 increased. Next, western blotting further verified that after DNA-PK inhibition, expression of CD44 variants increased (Fig. 1f). In summary, our findings strongly support a model wherein the DNA-PKcs protein controls a variety of biological processes, including alternative splicing, through its RNA-binding activity. Further work will elucidate the accessory factors of DNA-PKcs in regulating alternative splicing and how alternative splicing may contribute to the DNA damage response mediated by DNA-PKcs. Supplementary Information Supplementary Information

Autophosphorylation of the DNA-dependent protein kinase catalytic subunit is required for rejoining of DNA double-strand breaks.

Sheela Prithivirajsingh,  Akihiro Kurimasa,  Michael Story … (2002)
Nonhomologous end-joining (NHEJ) is the predominant pathway that repairs DNA double-strand breaks (DSBs) in mammalian cells. The DNA-dependent protein kinase (DNA-PK), consisting of Ku and DNA-PK catalytic subunit (DNA-PKcs), is activated by DNA in vitro and is required for NHEJ. We report that DNA-PKcs is autophosphorylated at Thr2609 in vivo in a Ku-dependent manner in response to ionizing radiation. Phosphorylated DNA-PKcs colocalizes with both gamma-H2AX and 53BP1 after DNA damage. Mutation of Thr2609 to Ala leads to radiation sensitivity and impaired DSB rejoining. These findings establish that Ku-dependent phosphorylation of DNA-PKcs at Thr2609 is required for the repair of DSBs by NHEJ.

Therapeutic targeting of splicing in cancer.

Stanley Chun-Wei Lee,  Omar Abdel-Wahab (2016)
Recent studies have highlighted that splicing patterns are frequently altered in cancer and that mutations in genes encoding spliceosomal proteins, as well as mutations affecting the splicing of key cancer-associated genes, are enriched in cancer. In parallel, there is also accumulating evidence that several molecular subtypes of cancer are highly dependent on splicing function for cell survival. These findings have resulted in a growing interest in targeting splicing catalysis, splicing regulatory proteins, and/or specific key altered splicing events in the treatment of cancer. Here we present strategies that exist and that are in development to target altered dependency on the spliceosome, as well as aberrant splicing, in cancer. These include drugs to target global splicing in cancer subtypes that are preferentially dependent on wild-type splicing for survival, methods to alter post-translational modifications of splicing-regulating proteins, and strategies to modulate pathologic splicing events and protein-RNA interactions in cancer.

Suisheng Zhang,  Matthias Görlach,  Frank Grosse … (2003)
An RNA-dependent association of Ku antigen with nuclear DNA helicase II (NDH II), alternatively named RNA helicase A (RHA), was found in nuclear extracts of HeLa cells by immunoprecipitation and by gel filtration chromatography. Both Ku antigen and NDH II were associated with hnRNP complexes. Two-dimensional gel electrophoresis showed that Ku antigen was most abundantly associated with hnRNP C, K, J, H and F, but apparently not with others, such as hnRNP A1. Unexpectedly, DNA-dependent protein kinase (DNA-PK), which comprises Ku antigen as the DNA binding subunit, phosphorylated hnRNP proteins in an RNA-dependent manner. DNA-PK also phosphorylated recombinant NDH II in the presence of RNA. RNA binding assays displayed a preference of DNA-PK for poly(rG), but not for poly(rA), poly(rC) or poly(rU). This RNA binding affinity of DNA-PK can be ascribed to its Ku86 subunit. Consistently, poly(rG) most strongly stimulated the DNA-PK-catalyzed phosphorylation of NDH II. RNA interference studies revealed that a suppressed expression of NDH II altered the nuclear distribution of hnRNP C, while silencing DNA-PK changed the subnuclear distribution of NDH II and hnRNP C. These results support the view that DNA-PK can also function as an RNA-dependent protein kinase to regulate some aspects of RNA metabolism, such as RNA processing and transport.