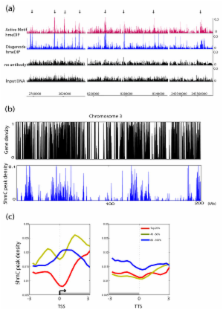 5-Hydroxymethylcytosine (5hmC) was recently found to be abundantly present in certain cell types, including embryonic stem cells. There is growing evidence that TET proteins, which convert 5-methylcytosine (5mC) to 5hmC, play important biological roles. To further understand the function of 5hmC, an analysis of the genome-wide localization of this mark is required.

Here, we have generated a genome-wide map of 5hmC in human embryonic stem cells by hmeDIP-seq, in which hydroxymethyl-DNA immunoprecipitation is followed by massively parallel sequencing. We found that 5hmC is enriched in enhancers as well as in gene bodies, suggesting a potential role for 5hmC in gene regulation. Consistent with localization of 5hmC at enhancers, 5hmC was significantly enriched in histone modifications associated with enhancers, such as H3K4me1 and H3K27ac. 5hmC was also enriched in other protein-DNA interaction sites, such as OCT4 and NANOG binding sites. Furthermore, we found that 5hmC regions tend to have an excess of G over C on one strand of DNA.

Our findings suggest that 5hmC may be targeted to certain genomic regions based both on gene expression and sequence composition.

Alvaro Rada-Iglesias, Ruchi Bajpai, Tomek Swigut … (2011)
Cell-fate transitions involve the integration of genomic information encoded by regulatory elements, such as enhancers, with the cellular environment. However, identification of genomic sequences that control human embryonic development represents a formidable challenge. Here we show that in human embryonic stem cells (hESCs), unique chromatin signatures identify two distinct classes of genomic elements, both of which are marked by the presence of chromatin regulators p300 and BRG1, monomethylation of histone H3 at lysine 4 (H3K4me1), and low nucleosomal density. In addition, elements of the first class are distinguished by the acetylation of histone H3 at lysine 27 (H3K27ac), overlap with previously characterized hESC enhancers, and are located proximally to genes expressed in hESCs and the epiblast. In contrast, elements of the second class, which we term 'poised enhancers', are distinguished by the absence of H3K27ac, enrichment of histone H3 lysine 27 trimethylation (H3K27me3), and are linked to genes inactive in hESCs and instead are involved in orchestrating early steps in embryogenesis, such as gastrulation, mesoderm formation and neurulation. Consistent with the poised identity, during differentiation of hESCs to neuroepithelium, a neuroectoderm-specific subset of poised enhancers acquires a chromatin signature associated with active enhancers. When assayed in zebrafish embryos, poised enhancers are able to direct cell-type and stage-specific expression characteristic of their proximal developmental gene, even in the absence of sequence conservation in the fish genome. Our data demonstrate that early developmental enhancers are epigenetically pre-marked in hESCs and indicate an unappreciated role of H3K27me3 at distal regulatory elements. Moreover, the wealth of new regulatory sequences identified here provides an invaluable resource for studies and isolation of transient, rare cell populations representing early stages of human embryogenesis.

R. Hawkins, Gary Hon, Leonard K. Lee … (2010)
Human embryonic stem cells (hESCs) share an identical genome with lineage-committed cells, yet possess the remarkable properties of self-renewal and pluripotency. The diverse cellular properties in different cells have been attributed to their distinct epigenomes, but how much epigenomes differ remains unclear. Here, we report that epigenomic landscapes in hESCs and lineage-committed cells are drastically different. By comparing the chromatin-modification profiles and DNA methylomes in hESCs and primary fibroblasts, we find that nearly one-third of the genome differs in chromatin structure. Most changes arise from dramatic redistributions of repressive H3K9me3 and H3K27me3 marks, which form blocks that significantly expand in fibroblasts. A large number of potential regulatory sequences also exhibit a high degree of dynamics in chromatin modifications and DNA methylation. Additionally, we observe novel, context-dependent relationships between DNA methylation and chromatin modifications. Our results provide new insights into epigenetic mechanisms underlying properties of pluripotency and cell fate commitment.

Chun-Xiao Song, Keith E. Szulwach, Ye Fu … (2011)
In contrast to 5-methylcytosine (5-mC), which has been studied extensively, little is known about 5-hydroxymethylcytosine (5-hmC), a recently identified epigenetic modification present in substantial amounts in certain mammalian cell types. Here we present a method for determining the genome-wide distribution of 5-hmC. We use the T4 bacteriophage β-glucosyltransferase to transfer an engineered glucose moiety containing an azide group onto the hydroxyl group of 5-hmC. The azide group can be chemically modified with biotin for detection, affinity enrichment and sequencing of 5-hmC-containing DNA fragments in mammalian genomes. Using this method, we demonstrate that 5-hmC is present in human cell lines beyond those previously recognized. We also find a gene expression level-dependent enrichment of intragenic 5-hmC in mouse cerebellum and an age-dependent acquisition of this modification in specific gene bodies linked to neurodegenerative disorders.