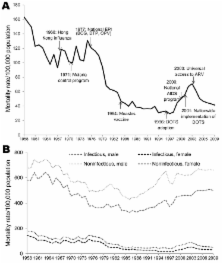 Counting the dead and what they died from: an assessment of the global status of cause of death data.

M Inoue,  Colin D Mathers,  Doris Ma Fat … (2005)
We sought to assess the current status of global data on death registration and to examine several indicators of data completeness and quality. We summarized the availability of death registration data by year and country. Indicators of data quality were assessed for each country and included the timeliness, completeness and coverage of registration and the proportion of deaths assigned to ill-defined causes. At the end of 2003 data on death registration were available from 115 countries, although they were essentially complete for only 64 countries. Coverage of death registration varies from close to 100% in the WHO European Region to less than 10% in the African Region. Only 23 countries have data that are more than 90% complete, where ill-defined causes account for less than 10% of total of causes of death, and where ICD-9 or ICD-10 codes are used. There are 28 countries where less than 70% of the data are complete or where ill-defined codes are assigned to more than 20% of deaths. Twelve high-income countries in western Europe are included among the 55 countries with intermediate-quality data. Few countries have good-quality data on mortality that can be used to adequately support policy development and implementation. There is an urgent need for countries to implement death registration systems, even if only through sample registration, or enhance their existing systems in order to rapidly improve knowledge about the most basic of health statistics: who dies from what?

Trends in infectious disease mortality in the United States during the 20th century.

Comparability of cause of death between ICD-9 and ICD-10: preliminary estimates.

Arialdi M Miniño,  Laura Anderson,  George H Rosenberg … (2001)
This report presents preliminary results describing the effects of implementing the Tenth Revision of the International Classification of Diseases (ICD-10) on mortality statistics for selected causes of death effective with deaths occurring in the United States in 1999. The report also describes major features of the Tenth Revision (ICD-10), including changes from the Ninth Revision (ICD-9) in classification and rules for selecting underlying causes of death. Application of comparability ratios is also discussed. The report is based on cause-of-death information from a large sample of 1996 death certificates filed in the 50 States and the District of Columbia. Cause-of-death information in the sample includes underlying cause of death classified by both ICD-9 and ICD-10. Because the data file on which comparability information is derived is incomplete, results are preliminary. Preliminary comparability ratios by cause of death presented in this report indicate the extent of discontinuities in cause-of-death trends from 1998 through 1999 resulting from implementing ICD-10. For some leading causes (e.g., Septicemia, Influenza and pneumonia, Alzheimer's disease, and Nephritis, nephrotic syndrome and nephrosis), the discontinuity in trend is substantial. The ranking of leading causes of death is also substantially affected for some causes of death. Results of this study, although preliminary, are essential to analyzing trends in mortality between ICD-9 and ICD-10. In particular, the results provide a means for interpreting changes between 1998, which is the last year in which ICD-9 was used, and 1999, the year in which ICD-10 was implemented for mortality in the United States.