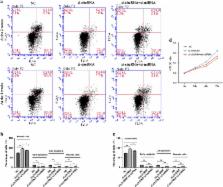 ‘RNA sponges’ may provoke lower back pain by soaking up regulatory RNAs that normally protect the protein infrastructure surrounding cells in intervertebral discs. Many people suffer from lower back pain arising from disc degeneration (IDD). A team led by Fei-Zou and Jian-Yuan Jiang at Fudan University, Shanghai, China set out to identify molecular mechanisms that might contribute to IDD. They focused on circular RNAs, non-protein coding RNAs that have been linked to a variety of diseases. The researchers learned that IDD is associated with strongly elevated expression of a circular RNA that acts as an ‘RNA sponge’, binding to and thereby inactivating other RNA molecules. This inactivation ultimately results in the excessive production of an enzyme that can damage the protein matrix that supports cells within spinal discs, potentially setting up the conditions for IDD.

X. An,  Koichi Masuda,  Yoshiyuki Imai … (2005)
An in vivo study to radiographically and histologically assess a new method of induction of disc degeneration. OBJECTIVE.: To establish a reproducible rabbit model of disc degeneration by puncturing the anulus with needles of defined gauges and to compare it to the classic stab model. New treatment approaches to disc degeneration are of great interest. Although animal models for disc degenerative disease exist, the quantitative measurement of disease progression remains difficult. A reproducible, progressive disc degeneration model, which can be induced in a reasonable time frame, is essential for development of new therapeutic interventions. The classic anular stab model and the new needle puncture model were used in the rabbit. For the needle puncture model, 3 different gauges of needle (16G, 18G, and 21G) were used to induce an injury to the disc to a depth of 5 mm. Radiographic and histologic analyses were performed; magnetic resonance images were also assessed in the needle puncture model. Significant disc space narrowing was observed as early as 2 weeks after stabbing in the classic stab model; there was no further narrowing of the disc space. In the needle puncture model, all needle sizes tested induced a slower and more progressive decrease in disc height than in the classic stab model. The magnetic resonance imaging supported the results of disc height data. The needle puncture approach, using 16G to 21G needles, resulted in a reproducible decrease of disc height and magnetic resonance imaging grade. The ease of the procedure and transfer of the methodology will benefit researchers studying disc degeneration.

Carlos P. Amaral,  John S. Mattick (2008)
Non-protein-coding sequences increasingly dominate the genomes of multicellular organisms as their complexity increases, in contrast to protein-coding genes, which remain relatively static. Most of the mammalian genome and indeed that of all eukaryotes is expressed in a cell- and tissue-specific manner, and there is mounting evidence that much of this transcription is involved in the regulation of differentiation and development. Different classes of small and large noncoding RNAs (ncRNAs) have been shown to regulate almost every level of gene expression, including the activation and repression of homeotic genes and the targeting of chromatin-remodeling complexes. ncRNAs are involved in developmental processes in both simple and complex eukaryotes, and we illustrate this in the latter by focusing on the animal germline, brain, and eye. While most have yet to be systematically studied, the emerging evidence suggests that there is a vast hidden layer of regulatory ncRNAs that constitutes the majority of the genomic programming of multicellular organisms and plays a major role in controlling the epigenetic trajectories that underlie their ontogeny.