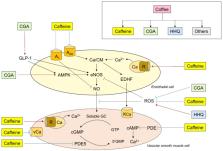 Coffee is a popular beverage throughout the world. Coffee contains various chemical compounds (e.g., caffeine, chlorogenic acids, hydroxyhydroquinone, kahweol, cafestol, and complex chemical mixtures). Caffeine is also the most widely consumed pharmacological substance in the world and is included in various beverages (e.g., coffee, tea, soft drinks, and energy drinks), products containing chocolate, and drugs. The effects of coffee and caffeine on cardiovascular diseases remain controversial. It is well known that there are J-curve-type or U-curve-type associations of coffee consumption with cardiovascular events including myocardial infarction and stroke. However, there is little information on the direct and indirect effects of coffee consumption on endothelial function in humans. It is likely that the coffee paradox or caffeine paradox exists the association of coffee intake with cardiovascular diseases, cardiovascular outcomes, and endothelial function. This review focusses on the effects of coffee and caffeine on endothelial function from molecular mechanisms to clinical perspectives.

Better latte than never: Is coffee good for your health?

The biology of incretin hormones.