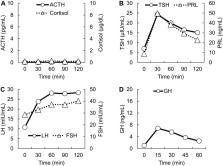 A 65-year-old woman without a history of diabetes mellitus was admitted for elective total knee arthroplasty for osteoarthrosis. There were no specific complaints except for knee flexion contractures, and the results of preoperative tests were unremarkable. On the day of surgery, the patient suffered from a hypoglycemic attack (52 mg/dL) after preoperative overnight fasting. A dextrose infusion immediately corrected the hypoglycemia, and a total knee arthroplasty was then performed. Although a hypoglycemic attack did not recur, further evaluation was required because of nausea that persisted after surgery. The morning serum cortisol level was 0.15 µg/dL with undetectable adrenocorticotropic hormone (ACTH), and the insulin-like growth factor-1 level was 9 ng/mL. An empty sella and bilateral adrenal atrophy were evident in imaging studies. ACTH and growth hormone (GH) did not respond to testing with corticotropin-releasing hormone and GH–releasing peptide-2, respectively. While serum cortisol did not increase on a rapid ACTH stimulation test, urinary free cortisol excretion responded to a prolonged ACTH stimulation test. Finally, the patient was diagnosed as having empty sella syndrome with ACTH and GH deficiencies. After the administration of hydrocortisone as maintenance replacement therapy, the patient’s prolonged postoperative nausea disappeared. Adrenal insufficiency is latent in patients with hypoglycemia episodes. Because patients with adrenal insufficiency require appropriate perioperative corticosteroid supplementation, clinicians should give priority to identifying the underlying etiology of hypoglycemia over non-urgent elective surgery when these co-occur.

Diagnosis and management of adrenal insufficiency.

Irina Bancos,  Stefanie Hahner,  Jeremy W. Tomlinson … (2015)
Adrenal insufficiency continues to be a challenge for patients, their physicians, and researchers. During the past decade, long-term studies have shown increased mortality and morbidity and impaired quality of life in patients with adrenal insufficiency. These findings might, at least partially, be due to the failure of glucocorticoid replacement therapy to closely resemble physiological diurnal secretion of cortisol. The potential effect of newly developed glucocorticoid drugs is a focus of research, as are the mechanisms potentially underlying increased morbidity and mortality. Adrenal crisis remains a threat to lives, and awareness and preventative measures now receive increasing attention. Awareness should be raised in medical teams and patients about adrenal insufficiency and management of adrenal crisis to improve clinical outcome.

15. Diabetes Care in the Hospital: Standards of Medical Care in Diabetes—2020

(2019)
The American Diabetes Association (ADA) "Standards of Medical Care in Diabetes" includes the ADA's current clinical practice recommendations and is intended to provide the components of diabetes care, general treatment goals and guidelines, and tools to evaluate quality of care. Members of the ADA Professional Practice Committee, a multidisciplinary expert committee (https://doi.org/10.2337/dc20-SPPC), are responsible for updating the Standards of Care annually, or more frequently as warranted. For a detailed description of ADA standards, statements, and reports, as well as the evidence-grading system for ADA's clinical practice recommendations, please refer to the Standards of Care Introduction (https://doi.org/10.2337/dc20-SINT). Readers who wish to comment on the Standards of Care are invited to do so at professional.diabetes.org/SOC.

Ole Schmitz,  B Djurhuus,  Claus Gravholt … (2007)
Cortisol is an important catabolic hormone, but little is known about the metabolic effects of acute cortisol deficiency. The objective of the study was to test whether clinical symptoms of weight loss, fatigue, and hypoglycemia could be explained by altered energy expenditure, protein metabolism, and insulin sensitivity during cortisol withdrawal in adrenocortical failure. We studied seven women after 24-h cortisol withdrawal and during replacement control during a 3-h basal period and a 3-h glucose clamp. Cortisol withdrawal generated cortisol levels close to zero, a 10% decrease in basal energy expenditure, increased TSH and T(3) levels, and increased glucose oxidation. Whole-body glucose and phenylalanine turnover were unaltered, but forearm phenylalanine turnover was increased. During the clamp glucose, infusion rates rose by 70%, glucose oxidation rates increased, and endogenous glucose production decreased. Urinary urea excretion decreased by 40% over the 6-h study period. Cortisol withdrawal increased insulin sensitivity in terms of increased glucose oxidation and decreased endogenous glucose production; this may induce hypoglycemia in adrenocortical failure. Energy expenditure and urea loss decreased, indicating that weight and muscle loss in Addison's disease is caused by other mechanisms, such as decreased appetite. Increased muscle protein breakdown may amplify the loss of muscle protein.